The first-ever TBM deployed in Laos has achieved breakthrough at the Theun Hinboun Expansion project. 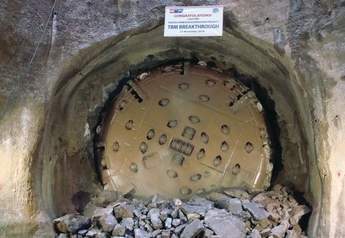 The machine broke through on November 21 into an exit shaft close to the intake structure on the river. About 40 people from the Lao Government, CMC, and local media were on hand to witness the event. “Since this is the country’s first machine, it has awakened people’s curiosity and interest. We had experienced Italian and Chinese crew members, but we also trained many Lao workers during the course of the project, as this was something they had not seen before,” said Luca Barbàra, Far East Manager for CMC di Ravenna.

The machine is now being disassembled and removed – CMC hopes to use it on upcoming projects in the region. Due to the current rainy season and relative low level of the tunnel, the last 100m (330 ft) up to the intake structure will be completed using drill and blast after the waters recede below the tunnel invert.

During excavation, the Robbins Single Shield TBM averaged about 19m (62ft) per day, with a peak advance rate of 37m (121ft) in one day. Ground conditions consisted of fair to good rock for 95% of the tunnel length, with some small sections of poorer rock quality. “We encountered an anticipated 15m (50ft) wide fault zone at about the 4700m mark with flowing water. We were able to drill a borehole and use expanding foam to consolidate the ground, allowing us to resolve the problem and continue boring in about one week,” said Barbàra.

Much of the geology for the new headrace tunnel was learned during an earlier excavation of the existing nearby headrace tunnel. Ground on the latest tunnel consisted of fairly soft, layered mudstone, siltstone and sandstone, with cover ranging from 26 to 380m (85 to 1200ft). To combat possible squeezing conditions in soft rock, the machine utilized an articulating cutterhead with over-cutters – a design that allowed the machine to excavate up to 100mm beyond normal tunnel diameter. The 17-inch disc cutters were back-loading for improved worker safety and project efficiency. A probe drill was used to check ground conditions up to 60m (200ft) ahead of the machine. To support the ground and provide final lining, 280mm (11 in) thick, pre-cast concrete segments are being used in a 5+1 arrangement, making a finished tunnel diameter of 6.9m (22.6ft).