JSC RusHydro has recently provided details on the year-four results of reconstruction work at the Sayano-Shushenskaya hydropower plant. 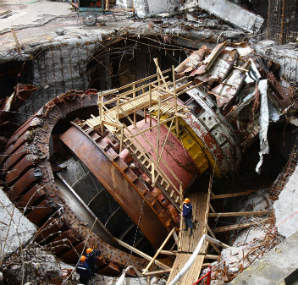 JSC RusHydro has recently provided details on the year-four results of reconstruction work at the Sayano-Shushenskaya hydropower plant.

Restoration work is needed at the project following the fatal incident on 17 August 2009 when hydro turbine No. 2 of the hydropower plant broke apart violently. The turbine room and power equipment were flooded, the ceiling of the turbine room collapsed, all ten hydropower units of the plant were destroyed, and 75 people were killed.

The second stage of reconstruction continued in 2012 with new hydropower units No. 7, 8, 9 launched.

In March 2013, new hydropower unit No. 10 was commissioned and the reconstruction project reached its final stage. During this stage all previously restored hydropower units will be replaced with new ones. Another new unit – No.5 – will be commissioned by the end of 2013. The plant will be fully equipped with new up-to-date equipment with enhanced performance characteristics that meet all safety and reliability requirements by 2014, the company said in a statement.

Currently, the Sayano-Shushenskaya hydropower project has five new hydropower units in operation with total working capacity of 3480MW or 60% of the plant’s installed capacity. Total electricity generation by the hydro plant after the accident exceeded 61GWh.

The useful life of the new units has been extended to 40 years and maximum efficiency now reaches 96.6%, RusHydro said. They also have improved energy and cavitation features. The turbines will be fitted with a more efficient process protection system, which will automatically shut down the unit in case of any inadmissible deviations from controlled parameters.

After the accident, RusHydro said it has allocated funds totalling RUR188M as a social support to people affected by the accident.

The Company is also involved into social projects of Cheremushki settlement aimed at development and improvement of sports facilities, cultural heritage preservation and public associations support.

The Cheremushki settlement is implemented by RusHydro together with the government of Republic of Khakasia and administration of Sayanogorsk city. RusHydro’s Board of Directors resolved to allocate the funds in the amount of RUR1.3B for these purposes.