RusHydro and Alstom are to extend their cooperation within joint venture company AlstomRusHydroEnergy LLC for the reconstruction and upgrade of the Cascade Kubansky hydro power plants in south Russia. 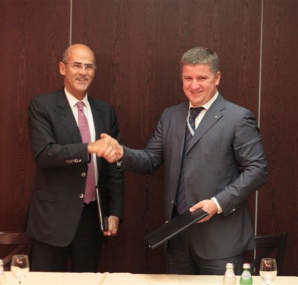 RusHydro and Alstom are to extend their cooperation within joint venture company AlstomRusHydroEnergy LLC for the reconstruction and upgrade of the Cascade Kubansky hydro power plants in south Russia.

The firms signed two agreements sealing their cooperation during the recent Petersburg International Economic Forum. The first agreement covers the strategic development of AlstomRusHydroEnergy LLC, and extends the scope of the JV to services including the inspection of power plants, supply of spare parts and components, retooling and the repair and upgrade of equipment. Both parties also intend to extend their cooperation to include innovation and R&D activities.

Both partners are also willing to collaborate in order to secure contracts for the JV’s plant located at Oufa. As part of its global modernisation programme, RusHydro will entrust the manufacture of equipment for its power plants to AlstomRusHydroEnergy LLC. Alstom intends to integrate AlstomRusHydroEnergy into its worldwide production system.

The second agreement details the key principles and timelines of the contract signed in 2011 for the reconstruction and upgrade of the Cascade Kubansky hydro power plants. The project is for the modernisation of eight hydropower plants and the pumped storage plant. Alstom will manufacture and deliver the equipment as well as supervising the installation, tests and commissioning of the power plants, using its advanced technical know-how and state-of-the-art technologies, particularly for the automation of the Nevinnomyssk control centre.

This agreement outlines the implementation of the project, specifies timelines and the obligations of each party and identifies the area of participation of the contractor, ESKO EES JSC.

Image: The agreements were signed by the Chairman of the Board for RusHydro, Evgeniy Dod, as well as the Chairman and Chief Executive Officer of the Alstom Group, Patrick Kron