Alstom has announced it has won new contracts at hydropower plants in Albania, Canada and Turkey. 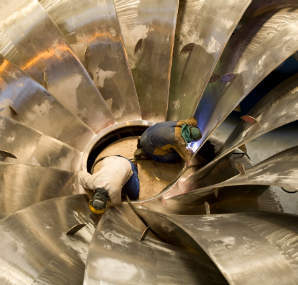 Alstom has announced it has won new contracts at hydropower plants in Albania, Canada and Turkey.

In Albania, Alstom was awarded a contract worth around €100M by Norway’s Statkraft to supply six Francis turbine-generator units and auxiliaries to its subsidiary in Albania, Devoll Hydropower Sh.A (DHP), for two new hydropower plants on the Devoll river.

The scope of the contract, which has been booked in the first quarter of the fiscal year 2013/2014, also includes two High Voltage substations of 220kV and 110kV in addition to hydraulic steelworks such as gates, penstock, stop logs and trashracks. The equipment will be mainly manufactured in Alstom’s factories in Spain and Turkey.

In Canada, Alstom has been awarded a contract worth more than C$90M for Hydro-Québec’s La Romaine 3 power house, one of four new powerhouses that make up the 1550MW La Romaine hydroelectric complex, located north of the municipality of Havre-Saint-Pierre on the north shore of the St. Lawrence River. This contract was booked during first quarter of fiscal year 2013/2014.

The scope of the contract includes the supply of two 200MW vertical Francis turbine-generator units complete with butterfly valves and regulation systems. Alstom will install and commission the equipment at the La Romaine 3 site.

The design of the turbines, generators, and auxiliaries, and the project management will be led by the experienced team from Alstom’s North American hydro headquarters and factory located in Sorel-Tracy, Quebec. The design of the units will incorporate the health and safety standards required by the customer.

For the Upper Kaleköy project owned by joint-venture between CENGIZ and ÖZALTIN, near Bingöl city, eastern Turkey, Alstom will supply one 30.6MW Vertical Francis turbine, generator, and the full electrical balance of plant including 380 kV switchyard equipment, generator step-up transformers, control system and rest of the electrical balance of the plant equipment.

With around 3,500 GWh/year, these three projects will have a significant contribution to Turkish renewable energy production, in total generating about 242,000 GWh/year for the country.