The UK government has given planning approval to EDF Energy for the proposed Hinkley Point C twin-EPR project in Somerset. 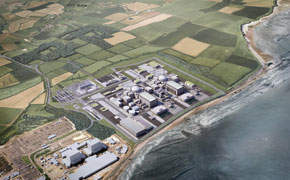 The UK government has given planning approval to EDF Energy for the proposed Hinkley Point C twin-EPR project in Somerset.

The approval is the final major permission to allow construction to begin, said EDF, although there are three other government permissions outstanding. The main one is reaching an agreement about the price of electricity subject to new environmental regulations, the strike price.

Vincent de Rivaz said: "To make this opportunity a reality, we need to reach agreement swiftly on the Contract for Difference for Hinkley Point C. It must offer a fair and balanced deal for consumers and investors. Intensive discussions with the Government are taking place and agreement is still possible."

Other approvals outstanding include a marine licence and approval of the Funded Decommissioning Plan, currently being prepared.

In the planning approval document, Ed Davey, secretary of state for energy and climate change, spoke directly to the concerns of people opposed to the project:

"I recognise that many people, both local residents and others, profoundly disaree with the Government’s polic on new nuclaerpowerstations and/or with some or all fo the Applicant’s proposals in respect of the HPC project … I do not by any means underestimate the extent of the adverse impacts with will be felt by many in their daily lives in the areas where HPC project works are to be carried out. The range of mitigations and controls provided for in the Order….is wide and I expect them to be effective in reducing the local impacts of the HPC project to an acceptable level, but residual adverse impacts from a planning point of view will remain and they will no doubt sometimes be keenly felt…However, in the final analysis, they are in my view significantly outweighed by the HPC project’s potential to bring local benefits and the vital contribution which it would make to the achievement of energy and climate change policy objectives, which, as the NPS sections [national policy statements] cited above make clear, are of crucial national importance."

Greenpeace wrote to DECC in March arguing that the decision of Cumbria County Council not to go ahead with development plans for a waste repository should force the government to not consent to the power station. In the document, he rejected that argument: "I am satisifed that effective arrangements will, in due course, exist to manage and dispose of the higher-activity radioactive waste produced by the HPC project in a GDF… [its decision] does not constitute a reason why I should not be satisfied."

He also rejected the Austrian government’s application that the government should include beyond-design-basis events in the planning process. He replied: "In my view such accidents are so unlikely to occur that it would not be reasonable to ‘scope in’ such an issue for environmental impact assessment purposes."