Grand schemes on the Congo

The idea of developing the river Congo’s potential has gained credence in recent years, as the political and security situation in the Democratic Republic of Congo has gradually improved. Neil Ford takes a look at the potential to increase capacity at Inga dam, as well as develop new plants elsewhere in the country 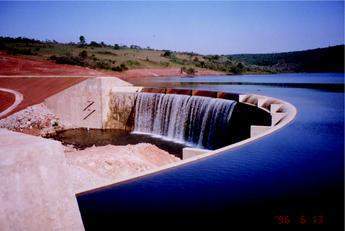 THE IMPROVING political situation in the Democratic Republic of Congo (DR Congo) has reawakened interest in developing the hydroelectric potential of the river Congo. The existing Inga hydroelectric plant has, perhaps surprisingly, managed to continue exporting power during the dark years of civil war and has now been placed at the heart of efforts to boost generating capacity across the entire continent of Africa. South African power giant Eskom has set up a new company, Western Power Corridor, to develop hydroelectric projects on the Congo and the company is increasingly talking up the possibility of expanding the Inga complex.

Africa in general and the Congo Basin in particular have long been talked of as likely locations for major hydroelectric expansion. Yet the continent as a whole has developed just 4% of its technically feasible generating capacity. Relatively little progress has been made in developing new projects, despite the claim that the Congo possesses enough power potential to supply the whole of Africa with the Middle East thrown in for good measure.

Developing the river Congo’s potential is an idea that has gained credence recently. Although the country remains one of the most unstable in Africa, the peace process is making headway and the devastating civil war seems to be at an end, although sporadic fighting continues in more localised conflicts across this large and disparate country. However, internal political disputes could still hamper negotiations between the government and investors.

Following the conclusion of the power sharing agreement in December 2002, President Joseph Kabila set up a new transitional government in July 2003 but relations between Kabila and his supporters on one side, and ministers from opposing factions in the country’s long civil war, are unsurprisingly strained. The ministries of mines and energy are currently contesting control of the country’s oil and gas resources but the power sector remains firmly within the mandate of the ministry of energy, which is under the control of Jean Pierre Kalema Losona, a key ally of the President and formerly employed by oil companies Mobil Oil and Fina Congo.

With DR Congo taking only tentative steps towards reconstructing its shattered economy, the lion’s share of investment in new dam projects must come from private sector investors. Moreover, those private investors must feel confident enough about the future stability of the country to commit large sums of money to constructing such infrastructure. Some backing could be provided by the multilaterals, although the government’s relations with the IMF and World Bank were weakened by the resignation of minister of finance Freddy Matungulu early in 2003.

DR Congo currently possesses 2515MW of installed hydroelectric generating capacity, including 1775MW at the Inga site, which is owned and managed by the state-owned power company Société Nationale d’Electricité (SNEL). The 351MW Inga I generator was commissioned in 1972, while the larger 1424MW Inga II was commissioned exactly ten years later. The two facilities are currently operating at far below installed capacity and feasibility studies for their modernisation have been carried out by Eskom and Electricité de France (EdF).

According to World Bank figures, the rehabilitation of Inga I and II will cost US$550M, although the Bank’s US$1.7B investment programme in the country has dedicated just US$400M to the power sector. Siemens originally signed a contract for the work in 2000 but construction work has been repeatedly delayed. Another US$450M is required to fund improvements in the transmission infrastructure which allows SNEL to export power to Congo-Brazzaville, Zambia and Zimbabwe, much of it at low cost.

SNEL’s financial position remains precarious. The government has failed to settle the back-dated bills of several major parastatals and has even ordered the company to offer three months’ free electricity as a reward to the loyal citizens of Kinshasa for their support for the government during the closing phases of the war. The company hopes to be able to part finance future projects by boosting export revenues. Deals for increased exports to Congo-Brazzaville and Zambia have been agreed, although there are obvious restrictions on one key market given the financial upheaval in Zimbabwe. The Congolese company hopes to export 500MW to the Southern African Power Pool (SAPP) by the end of 2004, with new contracts with Botswana and South Africa under discussion.

Although work on upgrading Inga I and II has yet to be completed, Eskom has expressed an interest in reviving the Grand Inga scheme, which was first mooted in the early 1990s following an African Development Bank (ADB) financed pre-feasibility study. The Eskom version of the Grand Inga plan would require a private company to be set up to run the entire project, with build operate transfer (BOT) contracts offered to boost Inga’s capacity to a massive 44,000MW through the phased construction of around 52 power plants, each with capacity of around 750MW.

The details of the Grand Inga project which have been released to date seem more like a statement of desire, and possibly of intent, than a definite scheme that is likely to go ahead. However, the first expansion phase, known as Inga III and expected to boost the project’s capacity by 3500MW, is scheduled for completion in 2012.

Even this more modest target will be largely export led, as foreign revenues will be required to justify the required investment in the first place.

According to feasibility studies carried out a decade ago by lahmeyer International of Germany and EdF, Inga III would cost up to US$11B. However, with the bill for the entire Grand Inga project estimated at US$30B, the US$11B price tag seems a lot of money for a limited amount of capacity and can surely only be justified if the entire scheme is eventually developed. EdF is to carry out a new feasibility study once the refurbishment of the existing dams has been completed.

Three major long distance transmission projects are planned in the run up to Inga III as part of the SAPP project: a new line to South Africa via Angola and Namibia, and improvements to the existing South African interconnector, which passes through Zambia and Zimbabwe; plus an even longer line to Egypt. The Nigerian National Electric Power Authority (Nepa) has also expressed an interest in the construction of a US$700M transmission line from Inga to Lagos, capable of delivering 1000MW of capacity. Gabon and Cameroon could also be supplied via spurs from this line.

Eskom is interested in Grand Inga because of South Africa’s own power needs but also because of the company’s long held desire to bring about the creation of a pan-African power grid. Eskom views Inga as the key point in the planned grid, which would connect the SAPP, with counterparts envisaged or actually under construction in East, West and North Africa. The managing director of Eskom Enterprises, Jan de Beer, says of the grid: ‘It’s going to happen; it’s just a question of how fast we can do it. Africa’s got everything – the resources, the raw materials and the energy.’

The proposed Inga-Egypt transmission line is particularly interesting, both because it would enable the transfer of power from South to North Africa, but also because it could enable the export of Congolese power to a large number of growing markets. The US$239M Egypt-Jordan interconnector is already in place, connecting North Africa to the Middle East, while work continues on the Mediterranean Power Pool (MPP) project to connect North Africa with the Middle East and Europe. Scheduled for completion in 2015, the MPP will enable the export of electricity from North Africa to Western Europe, allowing African power plants to access the European Union’s (EU) integrated power sector, in much the same way as African gas producers are already making the most of the EU’s newly liberalised gas markets.

Ben Munanga, Eskom Enterprises regional executive manager for Central and North Africa, argues that talk of developing Inga to supply the EU is realistic. He says: ‘There is potential for Africa to sell power to Europe. You need somebody to push those initiatives and that’s the role of Eskom. If the Inga hydro scheme is fully developed and the power pools we have in Africa are interconnected, then there is a possibility for excess capacity in Africa to be exported beyond.’

Although gas-fired plants fed by offshore Gulf of Guinea fields should be a key element in any African grid or pool, hydroelectric projects are likely to provide most new generating capacity. Hydro plants already dominate the generating stock of most African countries but power shortages are often caused by the highly seasonal nature of rainfall in most areas. However, rain falls in different parts of the continent at different times of the year, so widespread power trading across a unified pool would enable seasonally power rich areas to export to the power thirsty. The Congo Basin is something of an exception to this rule, however, as it receives plentiful rainfall all year round.

While rising demand in the EU and the Middle East could absorb much of Grand Inga’s production, the continent’s economic power house – South Africa – consumes far more electricity than any other African state and is therefore likely to provide the most reliable market in the short term. With or without Inga, SAPP’s transmission infrastructure will be improved, connecting the pool’s most northerly member, DR Congo, with its most southerly, South Africa.

While power demand within DR Congo itself is likely to rise sharply, this will be from a very low base as only 5% of the population currently has access to electricity. The government hopes to use financing provided by the International Development Association of the World Bank to finance reconstruction and improvement work on the country’s power grid. The priorities are the overhaul of the 220kV line between Kasumbalesa and Karavia; the rehabilitation of the 500kV line from the Inga plant to Kolwezi; and the construction of new 220kV interconnectors in Katanga Province, to link Karavia to Fungurume and Panda.

Just 4.5MW of new generating capacity is currently under construction but further investment is likely. Eskom has signed a rehabilitate, operate and transfer (ROT) contract with SNEL for the 75MW Zongo and 15MW Nsanga hydroelectric plants in the Bas Congo region, which principally provide electricity to the capital, Kinshasa. Further afield, the Kabila administration and the government of Central African Republic have agreed to build a 300MW plant on the river Ubangi at Palambo and the two governments also hope to increase capacity at the existing Mobayi-Mbongo plant.

While some of DR Congo’s smaller generating plants are owned by state-owned mining companies, SNEL will remain responsible for improving the power sector in the country. Although the company will probably take a stake in any Grand Inga operating company, the bulk of the required investment is likely to come from foreign construction and power companies, such as Eskom, with a limited though important contribution from multilateral investors.

The key to securing such investment, however, does not lie in subtle changes in the supply or demand situation, as Africa is already crying out for increased generating capacity and low production costs on the Congo could surely provide stiff competition to existing European suppliers. It lies rather in a secure investment environment in DR Congo and in the wider region, both with regard to political and security stability but also sound economic management. Dam investment takes many years to pay off and investors need to feel confident that there can be no repeat of the 1997-2003 war.