South Africa-based energy company NuPlanet is the developer of the 7MW Bethlehem Hydro project, and is managing the construction of the plant as well as it future operation. The project is located near the town of Bethlehem in South Africa and is owned by Bethlehem Hydro. The project – the first Greenfield hydro project constructed in the country – comprises two separate generation sites located on the As River: the Merino and Sol Plaatje stations. 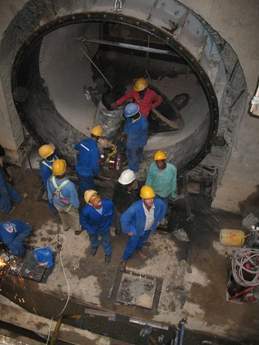 The Merino project consists of a diversion weir with a semi-circular spillway in the As River, a 700m long canal to transfer the water to the power station – a small forebay and power station situated in a sandstone bank from where the water is returned to the As River.

The generating head is approximately 14m and the generation output at the maximum flow will be approximately 4MW. A single Kaplan turbine and generator is also installed in this power station.

Bethlehem Hydro will generate income from the project by selling electrical power and capacity under a long term power purchase agreement (PPA) and by selling its reduction in greenhouse gas emissions as Certified Emission Reductions (CERs). Annual base load power production is set at 38GWh.

NuPlanet was first alerted to the opportunity to develop a small-scale hydro power plant in 1999 by MBB Consulting Engineers who are involved in the established Freidenheim hydro power scheme near Nelspruit in Mpumalanga. Hydro power opportunities are unusual in South Africa, but the outflow from the Lesotho Highlands Water Scheme, which emerges near Bethlehem in the Free State, presents a large flow volume in a geographic area where there are sufficient height differences to capture a powerful head of water. In addition, the flow of water is not seasonally variable, as it relies on the steady release of water from the dams in Lesotho.

NuPlanet undertook a broad pre-feasibility study, basically at risk. It investigated the opportunity and ascertained that the project was feasible. When the Netherlands initiated its AIJ pilot programme – a precursor to the Kyoto Protocol’s Clean Development Mechanism – NuPlanet submitted a project proposal to the Dutch government to obtain grant funding for the feasibility work required to take the project forward, and was successful in obtaining finance.

In 2002 Bethlehem Hydro contracted Ninham Shand to undertake the initial technical feasibility study of the project and provide services for the environmental approvals required for the project. Feasibility assessments for the development had to take account not only of technical and commercial factors, but also of environmental impacts and water use restraints, as well as securing land lease agreements, a power generation licence, and a power purchase agreement.

At the time of development there was quite a lot of relatively new legislation on South Africa’s statute books – the Water Act, the National Environmental Management Act, the act governing the National Electricity Regulator – that has not really been tested in respect of independent power producers operating at small scale.

At the commencement of the project Bethlehem Hydro undertook a thorough review of the feasibility study proposals for the project layout and made significant improvements to the layouts, particularly for the Sol Plaatje Power Station, where the power station was moved from the left bank to the right bank of the Dam. Lowest construction cost solutions were required to be implemented due to the marginal financial viability of the project, which has subsequently improved markedly due to increases in electricity prices.

Five international suppliers were pre-qualified for the tender to manufacture, supply and install the turbines and generators. Tenders were reviewed and it was recommended that the contract be awarded to Boving Fouress Limited, India. Prior to award of the contract the project team visited Boving Fouress in India to assess its capability and to inspect projects where its equipment had been installed. On the basis of the findings, it was concluded that the equipment would be fit for purpose and the contract was awarded to the company.

An open tender process was followed on the South African market for the appointment of contractors to undertake the civil works and install the power lines. After a detailed assessment of tenders received, Eigenbau (Pty) Ltd was appointed to construct the civil works and EDS Electrical was appointed to install the power line between Sol Plaatje and the town of Bethlehem. The power line to convey power from the Merino power station to link into the Eskom network was constructed by Eskom.

Final energy output at both power stations has increased compared to the feasibility study, due to such factors as design improvements and better hydrological records. All role players have shown an unusual commitment to overcoming obstacles as a team, which has resulted in a successful project.