Drax Group, Equinor and National Grid Ventures have signed a Memorandum of Understanding (MOU) to work together to deliver the UK’s first zero carbon cluster. 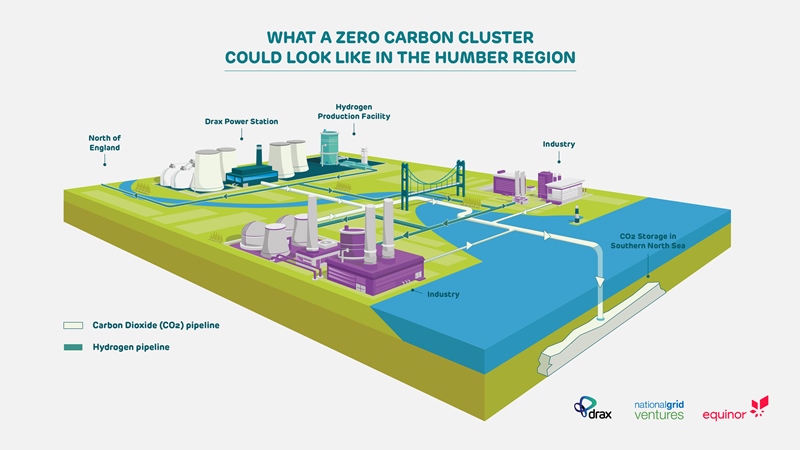 Drax Group along with Equinor and National Grid Ventures has announced a new zero carbon partnership, which marks the first response from industry after the UK Committee on Climate Change’s Net Zero report.

The companies have signed a Memorandum of Understanding (MOU) to work together on large-scale carbon capture usage and storage (CCUS) network and a hydrogen production facility to be constructed in in the mid-2020s.

The Net Zero report, which found that CCUS and hydrogen technology developed in regional industrial clusters is essential if Great Britain is going to achieve a ‘net zero’ carbon economy by 2050.

The partnership would make Humber the first net zero carbon region and home to a new world leading hydrogen economy.

Drax Group CEO Will Gardiner said: “The Committee on Climate Change was clear – the UK needs both bioenergy with CCS and hydrogen production at scale by 2030 to achieve a ‘net zero’ carbon economy. This partnership is committed to meeting this challenge putting Great Britain at the heart of the global energy revolution.

“With Drax’s carbon negative power station, the Humber region could lead the world in new technologies that can deliver for the climate and the economy, helping to create a cleaner environment for future generations whilst creating new jobs and export opportunities for British businesses.”

The three companies have agreed to work together to explore the opportunity to scale-up the innovative bioenergy carbon capture and storage (BECCS) pilot project at the Drax Power Station in the 2020s.

In addition, the partnership would develop a large-scale hydrogen demonstrator within the Drax site by the mid-2020s.

Drax claimed that its power station in North Yorkshire is already capturing a tonne of carbon dioxide a day from its innovative bioenergy carbon capture and storage (BECCS) pilot project.

Gardiner added: “We’re excited to be working with National Grid Ventures and Equinor on this project – for decades the Humber has been a strategically important industrial cluster for the UK – it has the skills, industrial capability as well as offshore storage to transform itself into a cutting-edge low carbon hub.”