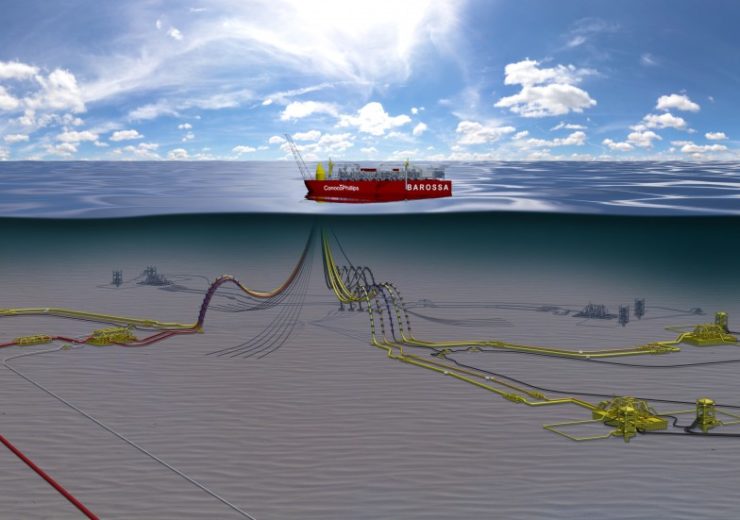 Illustration of the Barossa FPSO. Photo: courtesy of ConocoPhillips Company.

The floating solutions provider had been given the front end engineering design (FEED) contract for the FPSO last year. The Barossa Offshore Project is located nearly 300km north of Darwin in Australia’s Northern Territory.

Under the EPCI contract, MODEC will supply the new-build Barossa FPSO, which will be located permanently at the gas and light condensate project.

ConocoPhillips Australia-West president Chris Wilson said: “This is the largest and most significant contract to be awarded for the Barossa Project and a significant milestone in moving closer to a final investment decision in early 2020.

“It is a testament to the hard work by our project team and major contractors following the successful completion of the Front-End Engineering and Design effort.

“Final investment decision is progressing according to plan while we continue working collaboratively with Santos to finalise transitional arrangements and close the sale of our Australia-West assets.”

According to ConocoPhillips, the Barossa FPSO will be capable of processing dry lean gas for export through pipeline to Darwin, and for storing condensate for offloading to tankers on a periodic basis.

Dimensions of the Barossa FPSO

The FPSO will be nearly 354m in length and 64m in width. Its topsides will weigh around 34,400 tonnes, and will be able to accommodate up to 140 personnel.

ConocoPhillips through its subsidiary ConocoPhillips Australia Barossa is the operator of the offshore gas and light condensate project with a stake of 37.5%. Other partners in the Barossa Offshore Project are SK E&S Australia (37.5%) and Santos Offshore (25.0%).

Santos managing director and CEO Kevin Gallagher said: “The project is technically and commercially robust, and we are closing in on FID early in the new year, with contracts for the subsea umbilicals, flowlines and drilling of six subsea production wells to be awarded in the near future.”