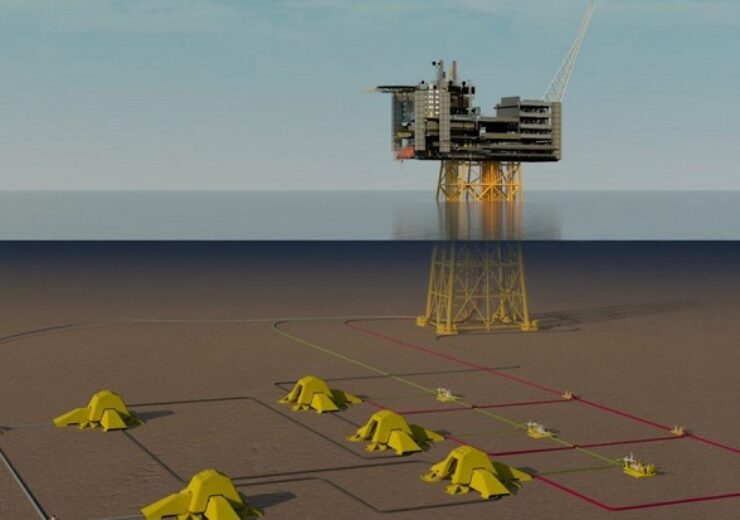 Illustration of the Solveig field development in the North Sea. (Credit: Lundin Energy)

Lundin Energy has secured approval from Norwegian authorities to begin production from the NOK6.5bn ($751.6m) Solveig field phase 1 development in the PL 359 licence in the North Sea.

The Swedish energy company is planning to commence production from the oil and gas field this autumn, said the Norwegian Petroleum Directorate (NPD).

The first phase of the offshore project aims to unlock estimated recoverable reserves of 9.2 million standard cubic metres (Sm3) of oil equivalent. The reserves are made up of 44 million barrels per day (bbls) of oil, 1.44 billion Sm3 sales of gas, and 0.42 million tonnes of natural gas liquids (NGLs).

Solveig will produce from subsea production facilities, which have been tied into the Lundin Energy-operated Edvard Grieg field, located 15km away.

The oil and gas drawn from the field will be processed at the Edvard Grieg platform prior to further transportation.

As per the plan for development and operation (PDO) approved in June 2019, phase 1 of the Solveig field development consists of three wells for oil production. Two more wells have also been drilled as part of phase 1, which will be used for water injection.

The offshore oil and gas field is anticipated to produce up to 2041.

According to the NPD, an investment decision is expected to be made by Lundin Energy and its partners for phase 2 development of the field at a later time. This will be based on the experience and information gained from phase 1.

Contained in a water depth of 100m, the Solveig field was discovered in 2013.

Lundin Energy has an operating stake of 65% in the North Sea field through its subsidiary Lundin Energy Norway.

The company’s partners in the offshore Norwegian field are OMV (Norge) and Wintershall Dea Norge, which hold stakes of 20% and 15%, respectively.