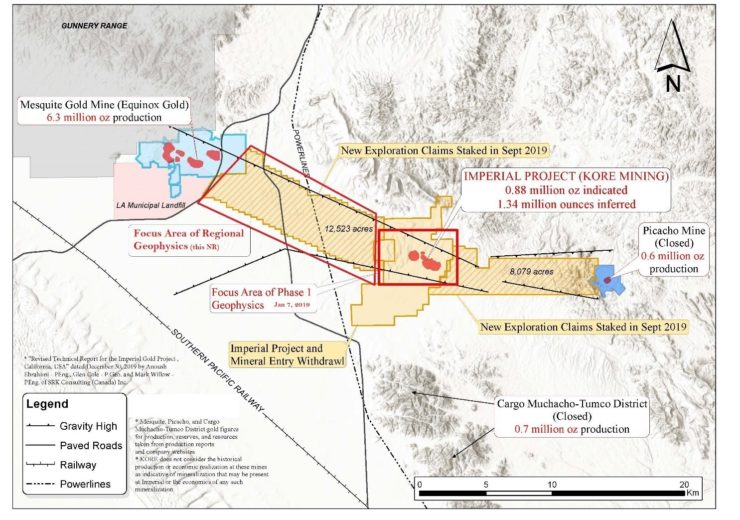 KORE Mining Ltd. (TSXV: KORE |OTCQB: KOREF) (“KORE” or the “Company”) is pleased to announce results from its ground geophysics program on the Mesquite-Imperial-Picacho District exploration project (“District” or “Project”).  Previously, KORE “tuned” the ground geophysics over its Imperial deposit and has now completed initial work using the “tuned” signatures to define exploration targets on the western half of the District exploration project.  The District covers 28 kilometer of total strike length from the operating Mesquite mine (Equinox Gold Corp. | TSX:EQX) to the closed Picacho mine and including KORE’s Imperial project.

Scott Trebilcock, President and CEO of KORE, stated, “KORE’s recent work is the first step in the exploration process to tap the vast potential of the Mesquite-Imperial-Picacho District.”  Mr. Trebilcock continued, “Districts controlled by a single Company are rare in the hyper-competitive gold exploration world.  Unlocking the potential of the Mesquite-Imperial-Picacho District could extend Imperial County’s long history of gold mining for many decades to come.”

KORE owns 100% of the District which consists of 26,323 acres on 1,007 claims and captures the entire 28-kilometer trend.   In the District, gold is hosted in local fault structures related to a series of regional faults connecting the known District deposits.  Those three District deposits (Mesquite-Imperial-Picacho) were discovered in exposed outcrops and from placer workings.  The rest of the District is covered by alluvium and has never been systematically explored.  Having the intact Imperial deposit to “tune” or “fingerprint” geophysical signatures, greatly enhances the ability to explore and target deposits under the alluvium and make new discoveries along the trend.