The new pipeline partnership will lease ADNOC’s stakes across 18 pipelines, which have a total length of more than 750km, and a combined capacity of around 13,000 Mbblpd 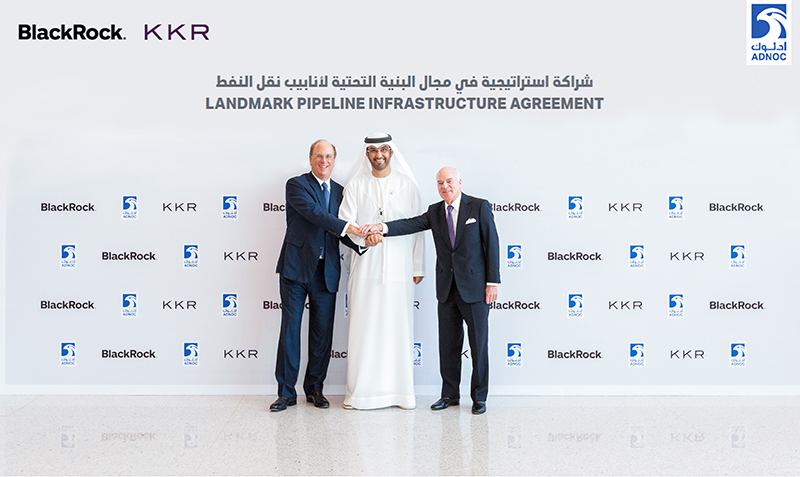 The parties signed the deal in February 2019 under which KKR and BlackRock will jointly own a stake of 40% in the pipeline infrastructure partnership that will lease ADNOC’s stakes across 18 pipelines.

In April, ADNOC struck another deal under which the Abu Dhabi Retirement Pensions and Benefits Fund (ADRPBF) agreed to acquire 3% stake in ADNOC Oil Pipelines for AED1.1bn (£240m). This transaction is expected to be completed in the fourth quarter, said ADNOC, which will hold 57% stake in the pipeline partnership.

The UAE state-owned oil company will own the stake through its subsidiary ADNOC Infrastructure, which also holds its 100% interest in Abu Dhabi Crude Oil Pipeline (ADCOP).

The oil and gas giant said that the investment from KKR and BlackRock was financed by a syndicate of global banks, which was oversubscribed during the syndication.

ADNOC finance and investment group director Ahmed Jasim Al Zaabi said: “The successful closing of this pioneering transaction and the oversubscribed financing is a clear vote of confidence by the global investment and finance community in both the UAE and ADNOC as an attractive investment destination.

“It also highlights the quality of ADNOC’s midstream pipeline assets and our innovative approach to structuring value-creating investment opportunities for our partners and investors.”

ADNOC Oil Pipelines will be engaged in transportation of stabilized crude oil and condensate across the offshore and onshore upstream blocks held by ADNOC for a period of 23 years. ADNOC will keep sovereignty over the pipelines and will be responsible for the management of pipeline operations.

The 18 pipelines to be leased by the pipeline partnership have a total length of over 750km and have a combined capacity of about 13,000 Mbblpd.

ADNOC Oil Pipelines will be entitled to a tariff payable by ADNOC for its share of volume of crude and condensate supplied through the 18 pipelines, which will be underpinned by minimum volume commitments from ADNOC Onshore and ADNOC Offshore.