The Abu Dhabi Retirement Pensions and Benefits Fund (ADRPBF) has agreed to acquire a stake of 3% in ADNOC Oil Pipelines from the Abu Dhabi National Oil Company (ADNOC) for AED1.1bn ($300m). 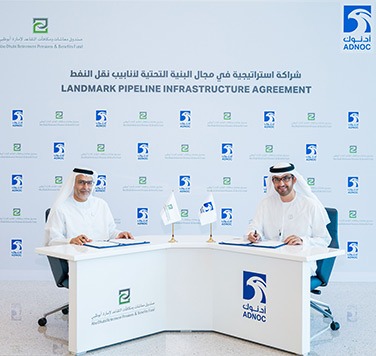 Through the investment in ADNOC Oil Pipelines, ADRPBF will join the other investors BlackRock and KKR, who earlier this year, signed an agreement with ADNOC to invest AED14.7bn ($4bn) in the new midstream entity.

ADNOC Oil Pipelines will be a pipeline partnership that will lease ADNOC’s stakes in 18 pipelines, which have a total length of more than 750km. The combined capacity of the leased pipelines is around 13,000 Mbblpd.

KKR and BlackRock will have a combined stake of 40% in the new pipeline company while ADNOC, following the latest deal with ADRPBF, will bring down its stake to 57%. ADNOC will own the stake through its subsidiary ADNOC Infrastructure, which also holds the former’s 100% interest in the Abu Dhabi Crude Oil Pipeline (ADCOP).

ADRPBF chairman Riyad Al Mubarak said: “The Abu Dhabi Pensions Fund is pleased to invest in ADNOC’s landmark transaction which is aimed at optimizing ADNOC’s assets and capital, and delivering sustained value to both ADNOC and the UAE. This transaction is an extension of our keen effort to create a solid base of investments in the UAE through partnerships with major local companies such as ADNOC.”

The pipelines under ADNOC Oil Pipelines transport stabilized crude oil and condensate across the offshore and onshore upstream concessions involving ADNOC for a period of 23 years.

The new pipeline entity will get a tariff payable by ADNOC, for its share of volume of crude and condensate that is transported through the 18 pipelines, which are supported by minimum volume commitments. ADNOC will retain sovereignty over the pipelines and management of pipeline operations.

“The addition of the Abu Dhabi Pensions Fund adds further validation of our wise leadership’s guidance to create and enhance value across our business by forming long term, mutually beneficial strategic partnerships. In addition, it demonstrates ADNOC’s progressive and smart approach to unlocking value from its portfolio of assets while retaining control over their ownership and operation.”

The deal between ADNOC and ADRPBF, which will be subject to customary closing conditions and all regulatory approvals, is expected to be completed in Q4 2019.