Heineken to switch to 100% renewable electricity in Spain

The solar plant will have capacity to generate 82 GWh per year, which is equivalent to supply electricity to more than 15,000 residential homes per year 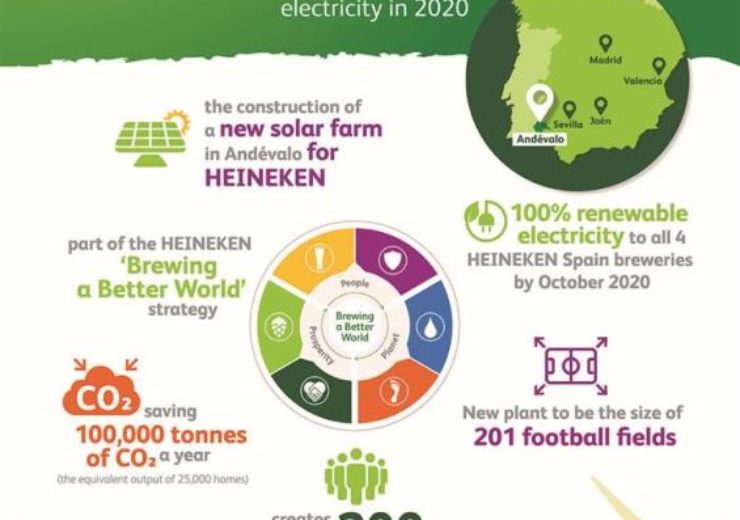 To be located in the municipality of Puebla de Guzmán (Huelva) in the south of Spain, the solar project will have a surface area of 150ha.

It will have capacity to generate 82 GWh per year, which is equivalent to supply electricity to more than 15,000 residential homes per year.

The solar plant will be constructed inside the 292MW El Andévalo wind farm, which was developed and managed by Iberdrola.

Heineken Spain managing director Guillaume Duverdier said: “This initiative reaffirms Heineken Spain’s commitment to sustainability, as well as our industry leadership position in the drive to towards renewable energy usage in Spain.

“After covering all our breweries’ electrical requirements, we will be replacing our existing gas boilers with ones that use biomass in order to be able to brew beer using only renewable energy by 2023.”

The solar project will supply 100% renewable electricity to Heineken’s four breweries in Spain as well as its offices by October this year. Upon completion, the solar plant will help to  offset 100,000 tonnes of CO2 emissions per year.

Additionally, the construction of the new solar facility is expected to create approximately 200 additional jobs in the local community.

Heineken said that the new agreement forms part of its global sustainability strategy known as Brewing a Better World.

Under its sustainability strategy, the company aims to grow its own share of renewable thermal energy and electricity globally to 70% by 2030.

The firm also said that 29 renewable energy projects are currently underway that focuses on harnessing the power of wind and solar energy, biomass or biogas.

In September last year, Iberdrola has signed a PPA with Heineken España to supply power from a 50MW Andévalo solar plant.