The GE Research Converter team created a virtual 3.5 MW wind turbine in the lab to demonstrate its “Tower of Power” at full scale 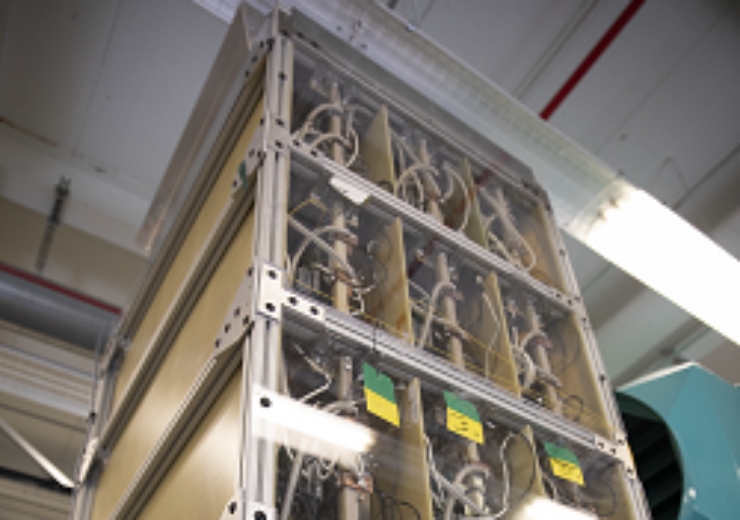 A team of engineers in the Electrical Systems group at GE Research have achieved one of the world’s firsts in the power conversion sector, demonstrating a MW-scale modular, multi-level wind power converter in its lab in Upstate New York.  The demonstration successfully culminates the key objective a five-year project through the U.S. Department of Energy (DOE) Advanced Manufacturing Office’s (AMO) Next Generation Electric Machines program.

To pull off the wind converter demonstration, GE engineers turned one of their labs on campus into a virtual 3.5 MW wind turbine outfitted with an actual wind generator and gearbox from GE’s Renewable Energy business.  GE scientists then developed, built and integrated its modular, multi-level “Tower of Power,” as it was coined by the team, into this virtual environment. The setup allowed the converter to be tested under real conditions as if a 300+ foot high wind turbine was standing tall and spinning in the middle of GE’s Research campus.

“The ability to build and test this type of breakthrough modular power conversion architecture at scale is a testament to the power of government partnership and industrial research in translating new technology into real solutions that transform the future of energy,” said Nathaniel Hawes, Principal Engineer in the Electrical Systems group at GE Research and project leader. “Through our work on this project, we have advanced the ball on future wind converter technology and created more potential opportunities to deploy this technology in other parts of the power conversion sector.”

Hawes noted that his team is now exploring potential commercial opportunities with GE’s Power Conversion business, which sells power conversion solutions into specialized sectors such as energy, marine and other industries.

Hawes said, “The operational flexibility our modular system provides is particularly attractive for industry applications that place a high premium on resiliency and reliability.” Today’s power conversion systems typically can operate for long periods of time, but when a single circuit board goes down, the whole system is temporarily disabled. And with obsolescence often encountered around parts to repair it, these repairs are often delayed. With a modular architecture, the dynamic is totally different.

“As opposed to one big power conversion box, we create one or a few standard building block(s) and then build and “stack up” multiple building blocks to make up a variety of  power conversion systems that collectively control power output,” Hawes said. “If one building block goes down, I don’t need to worry because the other building blocks or boxes will continue to function just fine and I can even design my systems with extra boxes or ‘bricks,’ as redundancy, which I can activate to supplement those that are offline.”

Hawes noted that the repairs to the smaller boxes versus one big system can actually be made faster too, in addition to the reduced spare parts inventory and product life cycle cost.

“We’re at the dawn of a new revolution in power conversion, with the successful demonstration of a modular, multi-level power conversion system.  We’re excited to take the next steps of exploring new commercial opportunities with GE’s Power Conversion business, while continuing the journey in broader power conversion sector.”