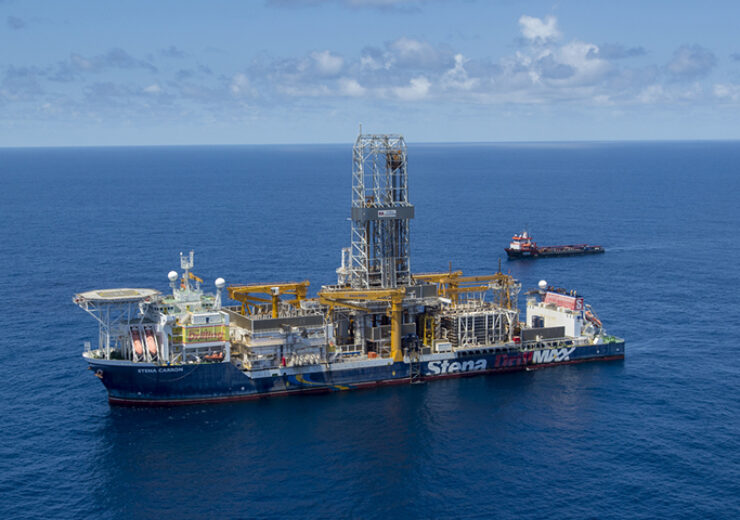 The Fangtooth-1 well in the Stabroek block was drilled by the Stena DrillMAX drillship. (Credit: Hess Corporation)

ExxonMobil and its partners have made two more oil discoveries in the offshore Guyanese block Stabroek, through the drilling of the Fangtooth-1 and Lau Lau-1 wells.

The Fangtooth-1 well intersected nearly 50m of high-quality oil-bearing sandstone reservoirs, said ExxonMobil. It was drilled in 1,838m of water by the Stena DrillMAX drillship.

The new oil discovery in the 6.6 million-acre long Stabroek block is located nearly 18km northwest of the Liza field.

According to ExxonMobil, the Lau Lau-1 well, which was drilled in 1,461m of water depth, encountered nearly 96m of high-quality hydrocarbon-bearing sandstone reservoirs. The well was drilled by the Noble Don Taylor rig.

The Lau Lau discovery is located nearly 68km southeast of the Liza field.

ExxonMobil said that the Fangtooth and Lau Lau discoveries will add to the 10 billion oil-equivalent barrels of recoverable resource estimate that was previously announced for the Stabroek block.

ExxonMobil exploration and new ventures senior vice president Mike Cousins said: “Initial results from the Fangtooth and Lau Lau wells are a positive sign for Guyana and continue to demonstrate the potential for the country’s growing oil and gas sector, ExxonMobil and our co-venturers in the Stabroek block.

“The Fangtooth discovery is a successful result of our strategy to test deeper prospectivity, and the Lau Lau discovery adds to the large inventory of development opportunities in the southeast part of the Stabroek block.

“Both discoveries increase our understanding of the resource, our continued confidence in the block’s exploration potential, and our view that the many discoveries to date could result in up to 10 development projects.”

ExxonMobil is the operator of the Stabroek block through a 45% stake held by its affiliate Esso Exploration and Production Guyana.

The other partners in the offshore Guyanese block are Hess Guyana Exploration (30%) and CNOOC Petroleum Guyana (25%).

ExxonMobil also revealed that the Liza Unity floating production storage and offloading (FPSO) vessel is on track to begin production in Q1 2022.

In a separate development, the Iraqi government has approved the Iraqi National Oil Company’s proposal to acquire ExxonMobil’s stake in the West Qurna 1 oilfield in the country.