Equinor said that the overall area solution will offset approximately 1.2 million tonnes of CO₂ per year 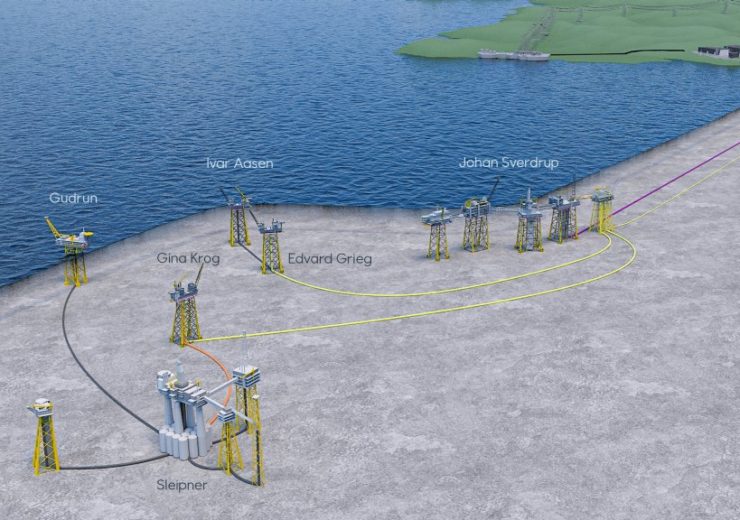 Equinor said that the Johan Sverdrup field will supply the Gina Krog, Ivar Aasen and the Edvard Grieg fields in the Utsira High area of the Norwegian North Sea with power from shore, starting from 2022.

The power from shore will come from the Utsira High area power grid.

According to Equinor, the area’s licence partners had recently agreed on maximising the utilization of power from shore to the area by allowing partial electrification of the Sleipner field centre.

Equinor expects the power from shore solution to reduce emissions

The Norwegian oil and gas company said that the overall area solution will help in offsetting nearly 1.2 million tonnes of CO₂ per year.

Equinor technology, projects and drilling executive vice president Anders Opedal said: “The Norwegian continental shelf (NCS) is leading in producing oil and gas with low greenhouse gas emissions. By enabling partial electrification of Sleipner and tie-in fields, we are making maximum utilization of the area solution for power from shore to the Utsira High to further reduce emissions from the NCS.”

The company said that the power from shore solution included in the Johan Sverdrup phase 2 development will offer an additional capacity of 35MW, which can meet the increased demand for electricity from existing or additional fields in the future.

Following the recent negotiations by the licence partners, the Sleipner field centre alongside the Gudrun platform and other tie-ins, will be supplied with power from shore to cover parts of their power demand. The solution will also make sure that the Edvard Grieg platform, operated by Lundin Norway, will be fully electrified through power from shore.

Lundin Petroleum revealed that the Edvard Grieg power from shore project will see the retirement of the existing gas turbine power generation system on the platform, and installation of electric boilers that will generate process heat. The project will also include installation of a power cable from Johan Sverdrup to the Edvard Grieg platform, said the parent company of Lundin Norway.

Lundin Petroleum president and CEO Alex Schneiter said: “Full power from shore for Edvard Grieg, as part of the Utsira High power grid, will not only significantly reduce the carbon emissions from the area to below 1kg of CO2 per barrel but will also allow us to drive further value from the asset base through higher production efficiency, reduced operating costs and less carbon tax.

“The CO2 saved from Edvard Grieg alone, will amount to approximately 200,000 tonnes per year from 2022, in addition to the emission savings as a result of power from shore to Johan Sverdrup.”