The Mongstad refinery is expected to receive up to 440,000 barrels of oil per day from the Johan Sverdrup project once phase 1 reaches peak production 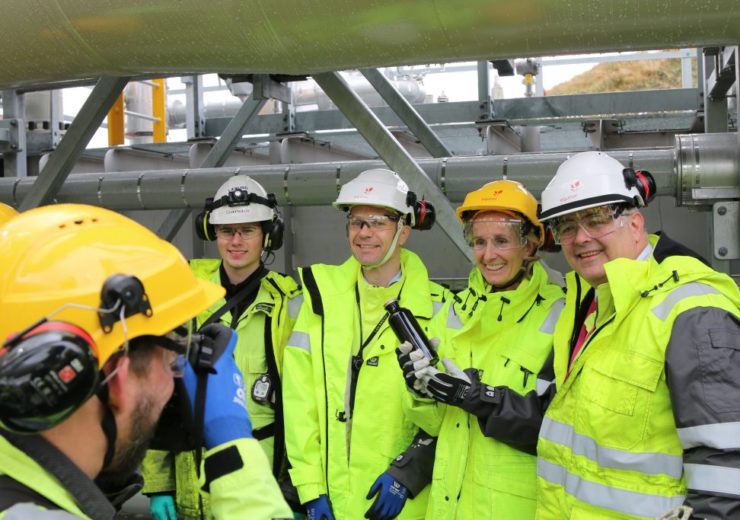 Irene Rummelhoff with a sample of oil produced from the Johan Sverdrup project. Photo: courtesy of Jannike Steindal Nordanger/Equinor ASA.

Equinor said that the first oil produced from the $13.6bn Johan Sverdrup project phase 1 in the Norwegian North Sea has reached the Mongstad refinery.

The Johan Sverdrup project had been brought into production earlier this month. Oil produced from the offshore North Sea field is piped to the Mongstad refinery, located 283km away, through a newly-built export pipeline.

At the Norwegian refinery, the oil is stored in caverns and prepared for shipping for global exports.

According to Equinor, the first cargo of the Johan Sverdrup oil – containing a million barrels with a market value of nearly $60m is likely to be dispatched to the Asian markets this week. The Norwegian oil and gas company said that future cargoes are estimated to contain between 600,000 and two million barrels.

Equinor marketing, midstream and processing executive vice president Irene Rummelhoff said: “First oil to Mongstad only a few days after production start confirms that the field is producing well. This day also marks the start of a new phase as we prepare to bring Johan Sverdrup oil to the international market.”

The refinery will receive more than 30%of the total oil from the Norwegian continental shelf once the Johan Sverdrup field is operating at full capacity, said Equinor.

Rummelhoff said: “Oil from Johan Sverdrup is expected to provide revenue of more than NOK 1400 billion for the next 50 years, of which more than NOK 900 billion will go to the Norwegian state and society.

“Mongstad will play an important role in realising this value. At the same time, Johan Sverdrup triggers high activity at the plant and new opportunities for the future.”

The gas produced from the offshore Norwegian field will be transported through the export pipeline to the Kårstø processing plant in Nord-Rogaland.