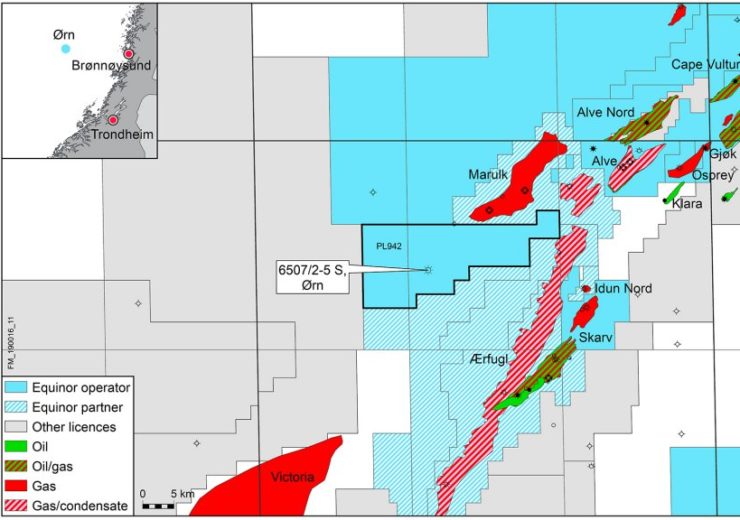 Image: The Ørn exploration well was drilled to a vertical depth of 4147m below sea level. Photo: courtesy of Equinor ASA.

Equinor and its partners have made gas discovery in the Ørn exploration well south-west of the Marulk field in the Norwegian Sea.

The well was drilled to a vertical depth of 4147m below sea level using the West Phoenix drilling rig. The well was terminated in the Tilje formation in Early Jurassic rocks.

The well’s objective was to verify petroleum in Middle Jurassic reservoir rocks (the Garn and Ile formations) while the reservoir and fluid data were to be collected from the Lysing formation in the Upper Cretaceous.

Recoverable resources at the well are estimated at 8–14 million standard cubic metres of recoverable oil equivalent.

“The Ørn discovery proves that there are still opportunities on the Norwegian continental shelf and reconfirms the Norwegian Sea’s importance to our domestic activity.”

Equinor, in partnership with AkerBP and Wellesley Petroleum, will assess the discovery and clarify the delineation requirement.

Ashton added: “The discovery follows several discoveries we have made in the same area during the past years, adding considerable volumes in an area with an already developed infrastructure. This gives us the opportunity to recover the resources profitably for both the licensees and society.”

The well, which has been permanently plugged and abandoned, was not formation-tested. Extensive volumes of data have also been acquired and samples have been taken.

Equinor owns a 40% stake in the latest discovery, while Aker BP and Wellesley hold 30% stake each.

Separately, Equinor and its partners have commenced production from the Utgard field which is located along the UK-Norway median line, in the North Sea, several months ahead of schedule.