EDF Energy, a subsidiary of French energy giant EDF, has officially opened the 41.5 MW Blyth offshore wind farm and the 49MW West Burton B battery storage facility in the UK. 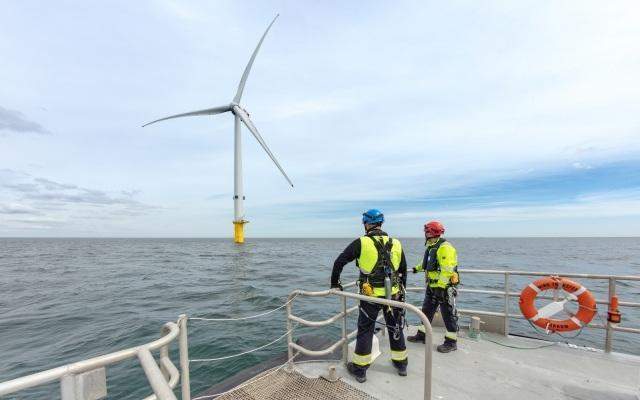 The Blyth off-shore wind farm, which is located 5.7km off the coast of Blyth, Northumberland coast, is made up of five turbines, each having a capacity of 8.3MW. MHI Vestas Offshore Wind was the supplier of the offshore wind turbines, which put together generate enough power to cover 34,000 homes.

According to EDF, Blyth is the first off-shore wind farm to be based on the float and submerge technology. The company said that the offshore wind turbines are supported by gravity-based foundations provided by BAM Nuttall, which were transported by floating to reduce the installation costs.

On the other hand, the West Burton B battery storage facility has been built at EDF’s 1,332MW West Burton B gas-fired power station in Nottinghamshire.

The battery storage plant has been constructed for the UK’s National Grid and is part of a new 200MW frequency response system which will be deployed in various parts of the UK for grid stability. Nidec ASI provided the energy storage system for EDF under a contract awarded in January 2017.

EDF Energy CEO Simone Rossi said: “These projects show how EDF is investing in new technologies to promote the development of renewable energies in the UK. At Blyth, we have used innovation to drive down the cost of off-shore wind power and at West Burton B we are setting up infrastructures, which will guarantee viability of a system increasingly focused on low carbon energy.

“Both projects demonstrate our commitment to providing UK consumers with reliable, affordable, low carbon energy from a range of technologies mainly based on renewable energies, batteries and nuclear power.”

Through EDF Renewables, the EDF Group operates the 62MW Teesside offshore wind farm in the UK, located nearly 80km to the south of the Blyth offshore wind farm. Last month, the company purchased the 450MW Neart Na Gaoithe off-shore wind project, to be built off the east coast of Scotland.