A brief history of dams in New Zealand

Dams in New Zealand have played an important role in securing hydropower and water supplies, as well as protecting against floods. 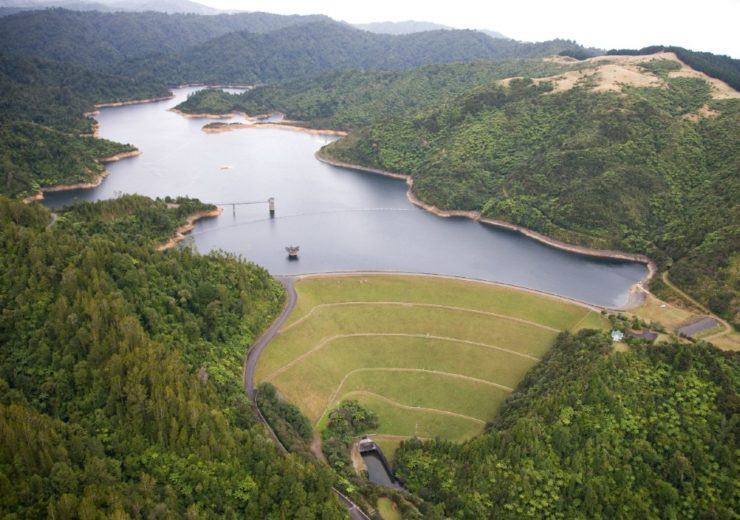 The Mangatangi Dam in New Zealand (Image courtesy of NZCOLD)

Dams and associated infrastructure have been a vital part of New Zealand’s development since the mid 1850s. The earliest dams in New Zealand were used to provide water for flour mills, to transport logs out of forests (by tripping the dam and transporting the logs downstream on the dam break flood) and for gold mining (power for the mines and high-pressure water for sluicing).

In 1888 the South Island West Coast mining town of Reefton was the first to have lighting provided by hydroelectricity.

Individual operators increasingly built their own hydropower generation plants, until in 1896 the government intervened to coordinate generation and transmission. A law was passed preventing people from building hydropower schemes without government permission.

Government built hydro stations commenced with the first major station at Lake Coleridge in the South Island, which began supplying Christchurch with electricity in 1914.

Hydropower and dams in New Zealand

During the First World War (1914-1918) the government planned high-voltage transmission grids in both the North and South islands, to carry power from isolated hydroelectric stations to cities and towns.

The Mangahao scheme, built between 1920 and 1924, provided electricity to the Wellington region, with other large schemes commenced on the Waikato River in the north and Lake Waikaremoana in the east.

When the Waitaki hydroelectric scheme was opened in October 1934, everyone turned up to hear the speeches. The scheme’s dam was built with pick, shovel and wheelbarrow, to create work for the unemployed during the great depression. Conditions on site and in the camp were bad.

The Waitaki power station township’s medical association, set up in response, was a vital precursor to the Labour government’s creation of the New Zealand welfare state in the late 1930s.

A national transmission grid was set up in 1965 with a cable across the Cook Strait (between the North and South Islands) forming part of the high voltage DC link between New Zealand’s largest earth dam, Benmore, and Wellington.

The last of the large hydropower dams was the Clyde dam, completed in 1990, as part of the then government’s “think big” scheme. This project is most well-known for the extensive landslide stabilisation required around the reservoir rim.

Of course, dams were being developed not just for electricity supply. The late 1800s saw droughts, outbreaks of waterborne disease and limited firefighting supplies in major cities.

Auckland’s first water supply was the Auckland domain in 1866, Waitakere Dam was built in 1910 and as the city grew, additional dams were added from the 1950s-late 1970s.

These dams are critical infrastructure today – with an estimated population of 1.66M people, the Greater Auckland Region is home to around one third of all New Zealanders and is one of the fastest growing regions in the country.

New Zealanders have benefited from the large renewable energy resources created during the second half of the 20th century.

Flood control dams are also a key part of New Zealand infrastructure – often overlooked until they are needed!

For the city of New Plymouth, on the East Coast of the North Island, 11 retention dams protect the city from “big wets”. New Plymouth District Council drainage reticulation supervisor Rob Campbell said: “What these dams do is stop all the water from flooding downtown by collecting it and releasing it back into the streams at a reasonable rate.”

Before this network of dams was set up 40 years ago the region frequently endured what New Plymouth Fire Service Senior Station Officer Ian Drewery referred to as “big wets”.

As resource consent to build dams has become harder to obtain, dam building in New Zealand in the traditional sense has slowed since the late 1970s.

Irrigation ponds / dams are the main exception, as they provide critical water supply for New Zealand’s primary industries – including agricultural and horticultural industries (New Zealand’s famous dairy, beef, lamb, wine and olive oil) – in the many regions including Canterbury, Marlborough, Hawkes Bay just to name a few. Over half of New Zealand’s total land area (of 268,000 square kilometres) is pasture and arable land.

Large off stream irrigation storage ponds and dams have been constructed in recent years in New Zealand, with some receiving strong opposition from the public due to fears of the possible impacts of dam break flooding.

Fears increased in the Canterbury region after the devastating Christchurch earthquakes of 2011 and 2016 with residents in the wider region understandably exhibiting a lower tolerance for risk.

The New Zealand Commission on Large Dams (NZCOLD) is a well renowned authority on dams in New Zealand, and contributed information to this article.