Carnarvon Petroleum Limited (“Carnarvon” or “Company”) (ASX:CVN) provides the following progress update in relation to the drilling of the Roc South-1 exploration well. 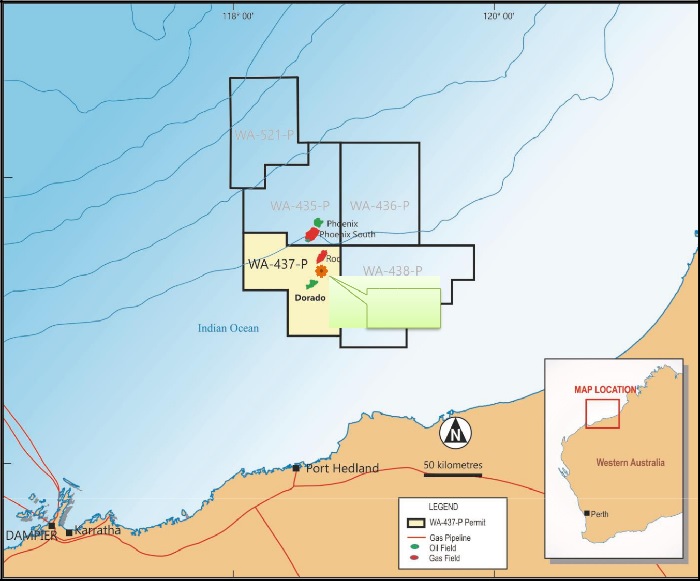 An 8.5” hole has been drilled to a depth of approximately 4,508 metres Measured Depth (“MD”) with the interpretation of wireline logs indicating no producible hydrocarbons across the Caley and Baxter sands. Based on the Dorado-1 and 2 reservoir results, the Company believes there is sufficient potential in the deeper Crespin and Milne intervals to drill to the planned TD of approximately 5,100 metres MD. Operations to run a 7” liner are currently underway, after which this final section will be drilled in 6” hole.

Carnarvon Managing Director, Adrian Cook said “our tremendous success to date has occurred through making significant discoveries, most particularly around Dorado and Roc. As we unlock this new basin on the North West Shelf we will find results that are unexpected and not as we should wish. The Roc South-1 result in the Caley and Baxter intervals is a case in point in that it will not build upon our current resource pool. That said, we should not lose focus on the fact that we have discovered a significant volume of resources to date, we are working on plans to bring the Dorado liquids (oil and condensate) into production as soon as possible and we have ongoing intentions to make new discoveries in the future. We will now test the deeper sections in the Roc South-1 well before the rig moves to the Dorado-3 appraisal well where it will conduct a flow test from the Dorado reservoirs that proved successful in the Dorado-1 and 2 wells.”

As evidenced by the results in the Dorado field, each reservoir interval is capable of being charged with different hydrocarbons and varying levels of fill. Accordingly, the Company believes there is sufficient potential in the deeper Crespin and Milne structures to continue drilling.

The objective of the Roc South well was to determine if additional hydrocarbons existed that were capable of being tied-in and produced with the Dorado liquids (oil and condensate) and gas production facilities. The development plans for Dorado will not be impacted by the Roc South results in the Caley and Baxter intervals.

In relation to the other exploration prospects in the area, the final Roc South-1 result is expected to assist in their refinement. However, the new 3D seismic data that is currently being acquired is expected to provide more relevant information over both the Dorado development area and a number of key prospects nearby.

Dorado, Roc and Roc South reside in WA-437-P in which Carnarvon holds a 20% interest.