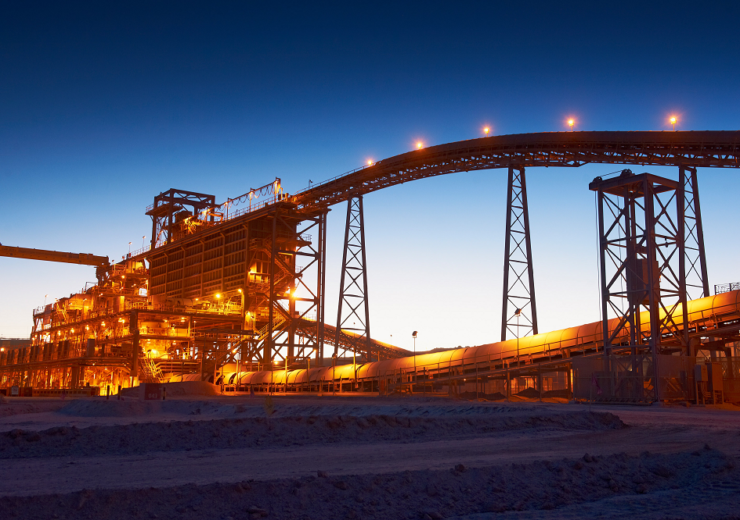 The expansion to the Spence copper project is expected to add 50 years to the Chilean mine's life (Credit: BHP)

Mining giant BHP has warned of a delay to the $2.5bn expansion of its vast Spence copper mine in Chile, as the coronavirus outbreak disrupts operations.

In an update, the Anglo-Australian miner said the schedule for the project has been placed “under review”, with first production expected to be delayed until early 2021, instead of the December 2020 start-up date previously targeted.

This will likely include a delay to the commissioning of a new desalination plant at the facility – with a further announcement expected later this year.

Covid-19 has put pressure on mining operations around the world, where tightly-knit, close-quarters working habits, as well as long, cross-border supply chains, have had to be revised, forcing companies to change how they operate both on and off-site.

BHP has taken measures to enact social distancing across its 72,000-strong global workforce to limit the spread of the virus, resulting in reduced headcount at its mining projects and restricting the movement of workers – slowing the progress of its operations in the process.

Spence is BHP’s second-biggest copper mine operation in Chile

The Spence copper mine, located in northern Chile’s Atacama Desert, is BHP’s second-biggest venture in the country, after the nearby Escondida project, the world’s highest-producing copper operation.

Both assets are central to BHP’s growth ambitions — with copper an increasingly-critical industrial metal used for electronics manufacturing — despite current market volatility caused by coronavirus and its stifling effect on demand for key commodities.

Henry added: “While demand in China has strengthened in recent weeks, we expect other major economies, including the US, Europe and India, to contract sharply in the June 2020 quarter.”

The delay to the Spence expansion, which is expected to extend the mine life of the project by 50 years and add around 200,000 tonnes of annual copper output, will be an unwelcome one.

In its operational update, BHP said it had mined 23,000 tonnes of copper at Spence in the third quarter ended March 2020, compared to 18,600 tonnes in the same quarter of 2019 – with 67,500 tonnes of copper mined in the first three quarters of the current financial year.

Globally, copper output fell by 7% in the three months to March compared to the previous quarter to 425,000 tonnes – while marking a 5% gain during the first nine months of the financial year to 1.3 million tonnes.

Coal recorded output losses across all these periods, as poor weather in Australia dampened operations to extract both metallurgical and energy coal varieties.

The BHP chief added: “We have delivered strong performance across the portfolio despite the impacts of planned maintenance, natural field decline and wet weather in Australia.