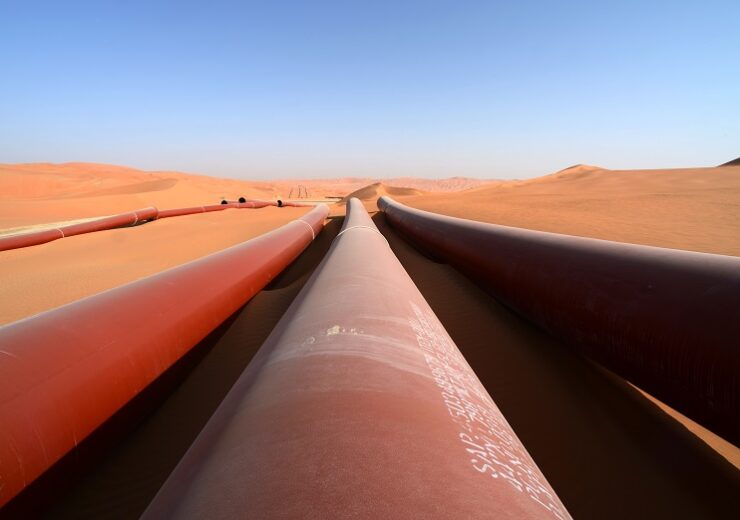 Aramco has inked a $15.5bn lease and leaseback deal for its gas pipeline network with an investor group. (Credit: Saudi Arabian Oil Co.)

Saudi Aramco has entered into a lease and leaseback deal worth $15.5bn for its gas pipeline network with a group of investors led by BlackRock Real Assets and Hassana Investment.

As part of the deal, the company will create a new subsidiary called Aramco Gas Pipelines in which it will hold a stake of 51%. The remaining 49% stake will be held by the investor consortium.

“The strongly contracted nature of this investment is a core part of our investment philosophy and represents an attractive opportunity for our clients who are seeking portfolio diversification through infrastructure.”

Aramco Gas Pipelines will lease usage rights in the network and lease them back to Aramco for a period of 20 years. In return, the former will be paid a tariff by Aramco for the gas products that will be transported via the pipeline network, which will be underpinned by minimum commitments on throughput.

According to Aramco, the deal will help in further consolidating its balance sheet. Besides, Aramco expects the transaction to unlock additional value from its diverse asset base.

Aramco said that it will continue to have 100% ownership and operational control of its gas pipeline network. The Saudi Arabian state-owned firm added that the deal will not put any curbs on its production volumes.

Aramco president and CEO Amin Nasser said: “Today, we have reached yet another major milestone in our portfolio optimisation program as we build towards a bigger and stronger gas business.

“It further underscores our commitment to long-term value creation for our shareholders, while bringing in BlackRock and Hassana as partners demonstrates our unique value proposition and ability to attract leading global investors to Saudi Arabia.

“With gas expected to play a key role in the global transition to a more sustainable energy future, our partners will benefit from a deal tied to a world-class gas infrastructure asset.”

The deal, which is contingent on any required merger control and related approvals and other customary closing conditions, is anticipated to close as early as practicable.

In June 2021, Aramco completed a previously announced deal worth approximately $12.4bn for divesting a stake of 49% in Aramco Oil Pipelines to a consortium led by EIG Global Energy Partners.