The project will supply an estimated 50,000 homes with electricity and will offset 340,000 tonnes of carbon dioxide emissions a year 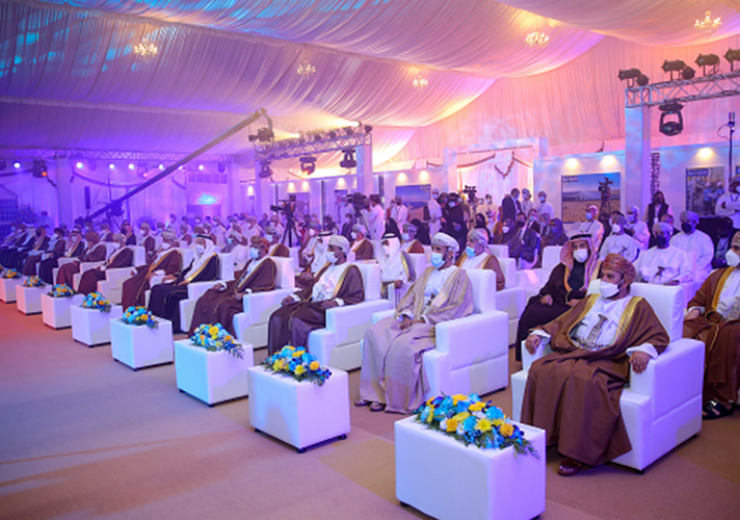 Under the patronage of His Excellency Sayyid Hamoud bin Faisal al Busaidi, Omani Minister of Interior, and in the presence of His Excellency Eng. Khalid bin Abdulaziz Al-Falih, Saudi Minister of Investment, a consortium consisting of ACWA Power – a leading developer, investor and operator of power generation, desalinated water and green hydrogen plants – Gulf Investment Corporation (“GIC”), and Alternative Energy Projects Co. (“AEPC”), today inaugurated Ibri 2, the first solar independent power project (IPP) to be launched under the country’s national renewable energy programme and connected to the main national grid. The consortium will produce renewable energy over a 15-year period for the Oman Power and Water Procurement Company (OPWP).

The project is a significant step towards achieving the Oman 2040 Vision, which includes 20% of renewable energy production by 2030 and up to 39% by 2040, as well as protecting natural resources in the Sultanate. Ibri 2 also represents a robust partnership between the public and private sectors and embodies another example of the Sultanate’s ability to attract foreign direct investment within the framework of a clear and transparent legal, legislative, and regulatory environment under the umbrella of the Omani Power Sector Regulation and Privatisation Law.

At an investment of US$417 million (160 million Omani rials), Ibri 2 is Oman’s largest utility-scale renewable energy project. The project was developed on a build, own, operate (BOO) basis, which utilizes solar photovoltaic technology to generate 500 MW of renewable power. Construction was completed in 13 months only at the highest health and safety standards, with 5 million safe man-hours, despite disruptions to the supply chain as a result of the pandemic.

As a company that is driving the transition globally, we are extremely proud to play a key role in supporting the Sultanate of Oman’s ambitious Vision 2040 energy transition goals. Since our market entry into Oman in 2011, we have brought in significant foreign direct investment, because we believe strongly in its vision and future. Together with our partners Gulf Investment Corporation and Alternative Energy Projects Co., we have leveraged our combined strengths in investments, industry expertise and technological know-how to achieve the rapid and successful completion of the milestone IBRI 2 project, despite challenging conditions imposed by the COVID-19 pandemic. I would like to take this opportunity to thank the Government of Saudi Arabia for their relentless support in enabling the development of the project in record time.” Said Mohammad Abunayyan, ACWA Power Chairman

“As we look ahead, partnerships, and solutions like we have introduced at Ibri 2, will be crucial in solving the real-world problems associated with climate change, and ensure that together we realise a greener future,” Abunayyan added.

ACWA Power has had a presence in Oman since 2011, bringing over US$2.6billion Foreign Direct Investment (FDI) into the country over the last decade. Along with Ibri 2 PV IPP, the company has an additional seven projects in operation or in development in the Sultanate.