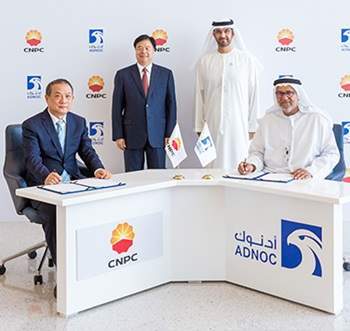 Under the contract, CNPC’s wholly-owned subsidiary BGP will carry out survey, covering an area up to 53,000km2.

The contract is part of its Adnoc’s strategy to identify and unlock new opportunities from its hydrocarbon resources.

UAE Minister of State and ADNOC Group CEO Sultan Ahmed Al Jaber said: “The announcement of the world’s largest continuous 3D seismic survey, and, with it, the deployment of cutting-edge exploration technologies is an important step in realizing the full potential of Abu Dhabi’s conventional and unconventional oil and gas resources as we deliver on our 2030 smart growth strategy.”

Using advanced technologies, the survey is expected to capture high resolution three-dimensional images of the complex subsurface structure, up to 25,000 feet below the surface.

To acquire data in Abu Dhabi waters, the survey will use seismic streaming vessels and ocean bottom nodes.

By utilizing the resources of ADNOC’s Thamama Subsurface Collaboration Centre, the seismic data captured in the survey will be interpreted by geoscientists and used to characterize and model potential hydrocarbon reservoirs.

Al Jaber said: “The scale of the project shows ADNOC’s commitment to upstream investment and to bolstering our oil and gas reserves and production for the long-term. The award, following a highly competitive bid process, also represents another key milestone in ADNOC’s thriving partnership with CNPC, and the UAE’s strategic energy partnership with China.”

In November last year, Adnoc announced plans to invest over AED400bn ($109bn), over the next five years, to boost oil and gas output as well as strengthen downstream activities.