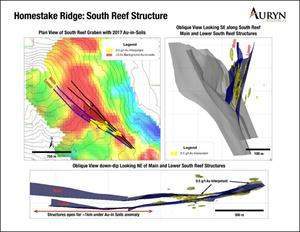 The program, which began on August 7th, 2018, consists of approximately 3,000 meters of core drilling to target gold mineralization along the high-grade South Reef deposit.

This year’s program aims to expand the known resource at South Reef by targeting the down plunge extension along the bottom of a graben, which defines the mineralized corridor (Figure 1).  The drill program will test 500 meters of strike extension along a one-kilometer gold-in-soils anomaly targeting multiple mineralized structures within the graben (Figure 2).

“The high-grade resource at the Homestake Ridge project has an exceptional opportunity for expansion along the South Reef mineralized corridor.  Geological modeling based on the 2017 drill campaign has identified a well-defined graben system that is open to the northwest and will be targeted with 6 – 8 drill holes.”

A total of 7200 meters in the 10,000 meter program has been completed, including:3700 meters of diamond drilling to follow-up on the Aiviq discovery along a 1.2 kilometer strike length
3500 meters of RAB drilling on high-resolution gold-in-till targets at Kalulik, Aarluk, Ridge, and Castle
Completion of the program is expected August 25th
Results are anticipated between mid-September and the end of October
A Message from Ivan Bebek, Executive Chairman & Director:

“The fourth quarter of 2018 will be exciting for Auryn shareholders as we are drilling two fully-funded opportunities for significant gold discoveries in Canada. We have also made great progress in Peru over the summer at our Sombrero project, where we recently identified several drill targets.  Updates can be expected in the coming weeks.

With respect to our recently announced funding, we appreciate the support from existing shareholders and welcome new shareholders. We plan to remain judicious with our treasury in these less-than-optimal market conditions.”

Michael Henrichsen, P.Geo, COO of Auryn, is the Qualified Person who assumes responsibility for the technical disclosures in this press release.