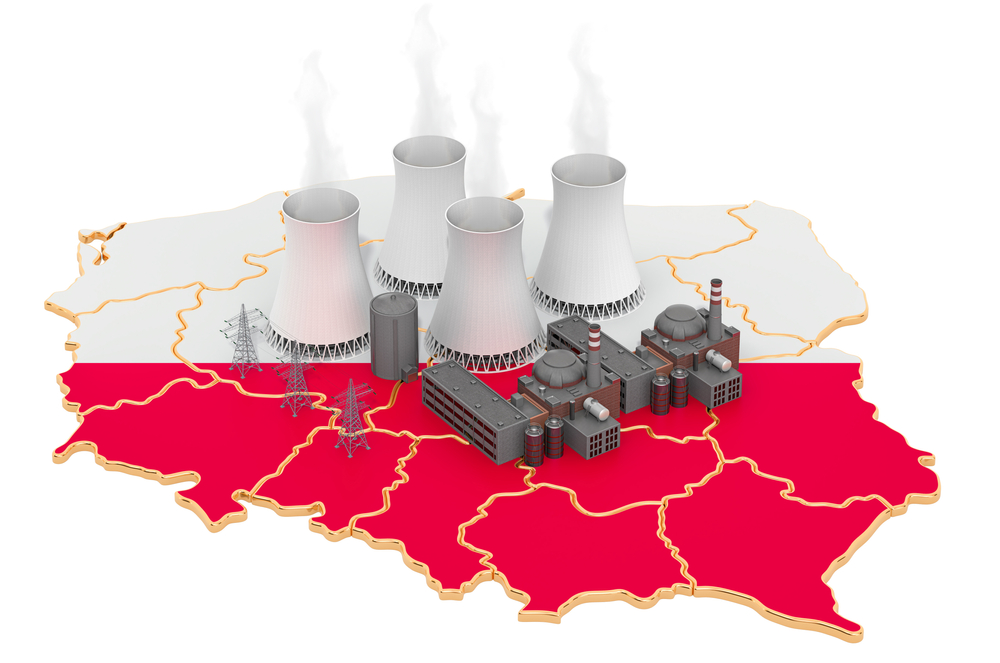 The Polish government has included nuclear energy together with offshore wind as key strategic projects that will help the country decarbonise its power system (Credit: Shutterstock/AlexLMX)

Under a new law agreed between member states and the EU Parliament, the bloc has raised its climate goals and will now cut its carbon emissions by at least 55% by 2030, compared with 1990 levels. Witold Strzelecki, communications manager at FORATOM, the Brussels-based trade association for the nuclear energy industry in Europe, discusses why Poland is looking to nuclear energy to help decarbonise its power system.

Almost 70% of electricity generated in Poland comes from hard and lignite coal, according to the latest data provided by the Energy Market Agency. This figure means Poland has the greatest reliance on coal of any EU member state.

In line with the bloc’s recent political commitment to become climate neutral by 2050, the country will have to find a way to decarbonise its power system while at the same time ensuring security of energy supply and keeping the costs of the transition to a minimum.

Recent developments show the Polish government has found the perfect solution – betting on nuclear energy. Poland wants to accelerate its low-carbon transition in line with the EU’s climate goals by building six nuclear reactors over the next 20 years.

The decarbonisation pathway chosen by the Polish government could set an example for other members of the EU to follow if they are serious about climate change.

The Polish government recently adopted a long-awaited energy strategy, entitled “Energy Policy of Poland until 2040”, which establishes a framework for the energy transformation and presents strategic directions on selecting low-carbon technologies for building a low-emission energy system.

In the document, the Polish government has included nuclear energy together with offshore wind as key strategic projects that will help the country decarbonise its power system.

According to the document, the Polish nuclear fleet will consist of six units (total capacity of 6-9 gigawatts (GW)) based on proven, large-scale, Generation III (+) pressurized water reactors (PWRs), which will be connected to the grid by 2043. The first unit, with a capacity of 1-1.6GW, will be started up in 2033 and it will be followed by more units every 2-3 years.

The recently approved strategy echoes the earlier Polish Nuclear Power Programme approved in 2014 and updated in 2020. The potential nuclear power plant sites selected are identical to the locations specified in the 2014 programme and the location of the first nuclear power plant in Poland will be selected from amongst potential coastal locations.

Currently, Poland’s nuclear new-build project is led by PGE EJ 1 – a special purpose vehicle responsible for preparing the investment process. Its activities include the administrative decisions based on the site investigation and environmental assessment.

The Polish government says the rationale for investing in nuclear power rests on three pillars – energy security; climate and the environment; and economy.

Nuclear energy provides a secure supply of baseload energy. With a typical availability of about 90%, nuclear power plants are a reliable source of electricity, especially compared with other low-carbon sources.

Nuclear energy helps the countries that choose it to reduce their dependency on fossil fuel imports (an important factor in the case of Poland), which make them less dependent on other countries.

Nuclear energy guarantees the security of supply thanks to high availability, access to multiple sources of supply, high energy density, the need for only a small quantity of uranium as fuel, and low sensitivity to uranium price variations.

In addition, nuclear energy produces none of the pollutants that cause acid rain and damage the ozone layer, such as nitrous oxide and sulphur dioxide.

Furthermore, it also protects the environment by protecting water quality, and by preserving and improving habitats for plants and wildlife.

The nuclear industry not only produces less waste than other electricity sectors, but it also carefully handles the back end of the fuel cycle activities in a responsible manner by contributing to funds to cover radioactive waste management (including spent fuel) and decommissioning expenses.

As well as playing a key role in decarbonisation and energy security, nuclear energy contributes to economic growth at the national, regional and local level. Building a single nuclear power plant can create up to 12,000 jobs during construction and 900 jobs throughout its operational lifetime.

Because the average operational life of a nuclear power plant is up to 60 years, the jobs are long-term and secure, offering excellent career opportunities.

According to Deloitte’s study Nuclear energy: Powering the economy: carbon-free growth, jobs and leadership in innovation, 1GW of installed nuclear capacity in the EU triggers €9.3bn ($11.4bn) in annual investment in the nuclear and connected economic sectors.

Apart from planning the construction of six large reactors, a discussion on using small modular reactors has also recently emerged in Poland.

The company has agreed to work with GE Hitachi Nuclear Energy on siting GEH’s BWRX-300 SMR in Poland. It has already initiated discussions with Poland’s National Atomic Energy Agency about the project.

Recently, Synthos – together with nine other European companies – signed a declaration (known as the Tallinn Declaration) on the future of SMR licensing. The declaration identifies the key issues vital to overcoming licensing and regulatory challenges facing the development of SMRs in the EU.

What is important regarding the future of nuclear energy in Poland is that the general public tends to become more and more pro-nuclear every year.

Also, in the vicinity of the potential sites of the nuclear power plant, support for the construction of the first nuclear power plant in Poland amongst the residents of site communes (Choczewo, Gniewino and Krokowa) has been consistently growing.

It has now reached 71%, based on a survey commissioned by PGE EJ 1 and conducted by PBS in late 2019. These figures show that the public opinion in Poland supports the development of this low-carbon source of energy due to the benefits it can bring.

Poland’s decision to introduce nuclear energy should be considered from the broader European perspective.

EU institutions are currently working on the implementation of the European Green Deal, the European Commission’s overarching plan to reach carbon neutrality by 2050.

A number of EU member states consider nuclear energy as an important element of their decarbonisation pathways.

Their plans to maintain, increase or even introduce nuclear energy in their energy mix have been recently expressed in the so-called National Energy and Climate Plans (NECPs), which each EU member state had to submit to the European Commission.

Of these, 16 of the 27 EU member states have included nuclear energy in their NECPs. This approach is in line with the European Commission’s strategic long-term vision “Clean Planet for All”, in which nuclear energy – together with renewables – has been described as the backbone of a carbon-free European power system.

Poland, with its bold nuclear plans, can show the EU that nuclear energy can help the whole block decarbonise effectively, while at the same time ensuring the security of energy supply and boosting the economy.

It can be seen as a benchmark for other European countries to follow, showing that nuclear is a perfect solution to achieve the EU’s climate goals.