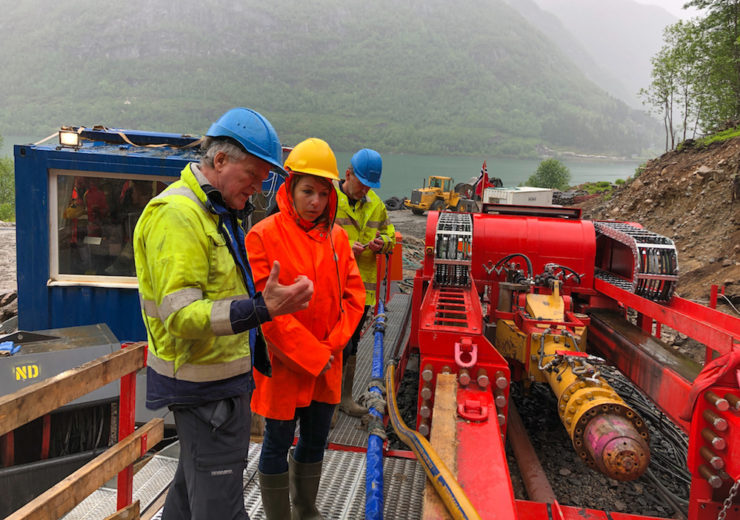 Norhard was established in 2006 as Norwegian Hard Rock Drilling by Statkraft, Lyse, Skagerrak and Agder Energi, with financial support from The Norwegian Water Resources and Energy Directive (NVE).

The idea was to develop a new technology enabling small hydropower potential to be utilised in an environmental way, without disturbing the landscape. Drilling from bottom and up, following predefined curves with a high grade of accuracy and by use of fully electrically operated equipment was basic input for the technical development.

The company headquarters is located at Tonstad, often referred to as the Norwegian capital for hydropower, approximately 110km south-west of Stavanger.

It’s area of experience and expertise is focused around drilling from bottom and up, following predefined curves over long distances and large differences in elevation.

Norhard enables development of hydropower plants at locations currently unfeasible due to costs, technical or environmental challenges. The technology eliminates the need of building temporary access roads to the mountaintop.

The operational envelope, at present, is lengths of up to 2km and diameters in steps from 400mm up to 1500mm. The direction control is within a deviation of less than 1m per 1000m drilled distance. Cuttings are flushed out of the tunnel while drilling, in a closed loop system.

The system comprises of a sediment reservoir for sedimentation of cuttings and pumps for water recirculation to the drill head. To facilitate effective cuttings removal from the tunnel by gravity, the slope of the tunnel is planned not to be lower than approximately three degrees.

In parallel with the technical development, Norhard has delivered drilling and lining of pressure shafts for more than 20 small hydro plants all over Norway producing in excess of 250GWh. Part or complete tunnel lining is included in our scope of work which enables us to supply a complete hydropower shaft.

The starting point for drilling can be from open-air location or from underground location.

What is Norhard’s Eco Drilling solution?

Norhard’s Eco Drilling solution was formed in 2016/2017 to design a complete drilling solution especially designed for utilization of hydropower potential based on the operational experience gained by use of the Norhard technology and equipment over the initial 10 years of activity.

Specifications focusing on capability, operational and environmental efficiency to facilitate the expansion of renewable hydropower generation from remaining potentials.

Eco Drilling does not use explosives, which cuts CO2 emissions by 140t per average hydropower project when compared with the alternative Drill & Blast (D&B) method in combination with rise boring.

The Eco Drilling method incorporates a state-of-the-art electric drilling motor directly attached to the drill bit, and a non-rotary drill string. This reduces the friction between the drill string and the rock to a minimum and consequently cuts the system’s overall energy consumption.

Norhard’s aim is to extend the drilling length to up to 3km and to cover possible difference in elevation of up to 1km.

Norhard was granted funding in 2017 through the Horizon 2020 SME programme of the European Union for development and international commercialization of the Eco Drilling technology. Norhard is funding the remaining part.

The Eco Drilling project is carried out internally in the Norhard organization over a period of two and a half years. One of the pilot sites is a pressure shaft 1.5km long over a difference of elevation of 500m and with diameter 1200mm.

The aim is to facilitate Norhard’s position as the main supplier of challenging pressures shaft solutions for small hydropower plants in Norway and utilise the experience and knowledge to grow the technology worldwide by partnering with local financial and/or technical partners in relevant markets.

The technology is also well adapted for utilisation within other market segments than the small hydropower business.

The transfer of water sources at high elevations into already existing large Hydro Power Systems is in some cases an efficient way of optimising the already built infrastructure to gain more renewable hydropower.

Equipment adapted for helicopter transport and supplementary technology focusing on drilling of tunnels over horizontal stretches is an ongoing activity within the project that has received great interest for such applications.

Norhard believes that the Eco Drilling technology might have a potential to support systems for flushing of sediments in reservoirs with reduced capacity caused by build-up of sediments.