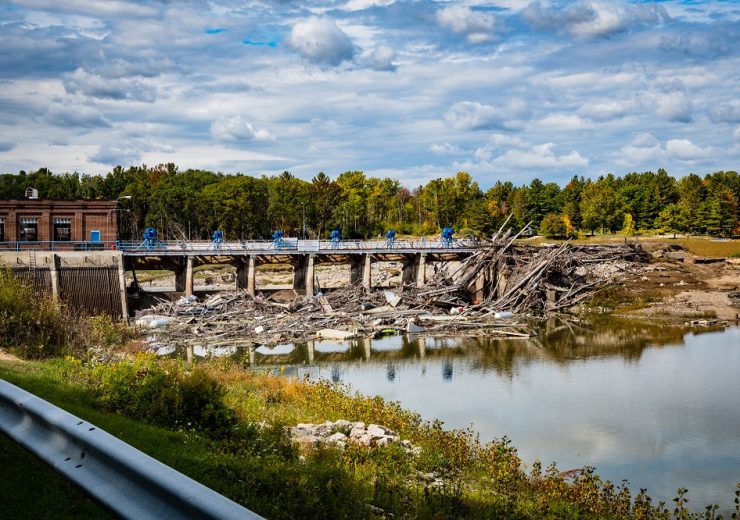 The Sanford Dam near Midland, Michigan failed in May 2020 following a torrential downpour (Credit: Bernie Parsons/Shutterstock)

If significant investments in dam safety are not made soon, the US state of Michigan is heading towards a grave situation with many of its 2,600 dams. This is the stark warning from the Michigan Dam Safety Task Force which lists 86 recommendations for improving safety, and preventing tragic loss of life, property and public trust. International Water Power & Dam Construction magazine has the latest.

The dam-building era of the 20th century created an inventory of more than 2,600 dams in the US state of Michigan. And, according to a recent report, current custodians of this dam legacy have inherited an ageing inventory that requires comprehensive and immediate attention.

Following heavy rainfall in the Gladwin and Midland County areas of Michigan on 19 May 2020, the privately-owned Edenville Dam failed and released a torrent of water that also caused the downstream Sanford Dam to fail.

The resulting floods forced some 10,000 residents to evacuate. Homes, businesses, roads, bridges, and other infrastructure were destroyed, with damages estimated at $200m. The “unspeakable hardship” that followed was also exacerbated by the global Covid-19 pandemic.

To prevent such a catastrophe from happening again, the Department of Environment, Great Lakes and Energy (EGLE) was directed by State Governor Gretchen Whitmer to investigate events leading up to the disaster and recommend policy, legislative, budgetary and enforcement reforms.

Alongside an independent forensic investigation of the dam failures and a peer review by the Association of State Dam Safety Officials, EGLE launched a 19-member Michigan Dam Safety Task Force in August 2020.

Its focus was to put the larger issue of dam safety in Michigan under intense scrutiny. The final report, which was published on 25 February 2021 with unanimous support from the task force, included 86 recommendations across eight key areas. It is the culmination of a five-month process that included:

“All the recommendations make important improvements toward the overarching goal of reducing the total risk of Michigan’s dam portfolio over the next two decades,” the report states.

“When implemented, the recommended actions will reduce risk of dam failure; provide financing for dam maintenance, repair, and removal; provide adequate authority and resources for the state’s Dam Safety Programme; address emergency preparedness in case of failure; and increase public awareness of dams leading to greater safety and security.”

Dams are spread across every county in Michigan. Most of the estimated 2,600 structures are described as being in “fair condition” based on current inspection requirements. Almost 1,100 are regulated by the state and 92 are hydroelectric dams that are regulated by FERC.

While most dams in Michigan are in a fair condition, the task force calls attention to the fact that “deterioration of facilities commonly outpaces investment in facilities”. Many of the dams are said to be ageing, poorly maintained and/or inadequately engineered for changing environmental conditions.

Key state statistics show that, since the early 20th century, 304 dams in Michigan have failed, 80 have been removed, six drawn down, four abandoned and 364 dams repaired.

More than 80% of Michigan’s dams are older than the nominal 50-year design life and many were built prior to comprehensive regulation.

Over time, dams that once had a utility function have ceased to serve their original purpose and have been repurposed for recreation or other uses. Spillway capacity is often below projected storm flows and there is a lack of funding for dealing with problem dams.

The Michigan Dam Safety Programme is responsible for the inspection and enforcement of hundreds of dams. Its three members of staff (until recently this was only two, but a third engineer was employed in December 2020) are expected to regulate up to $4bn worth of infrastructure dispersed across 1,000 regulated and 1,600 or so unregulated facilities.

This means that in Michigan each member of staff is responsible for 342 dams. In comparison, Wisconsin dam safety staff only have 65 dams each. Indiana, Minnesota, Ohio and Pennsylvania range from 121 to 186 dams each. However, in Illinois this increases to 491 dams per staff member.

Underinvestment in Michigan’s dam safety programme “for so many years has had significant consequences”. According to the task force, there is a funding gap of at least $225m in funding over the next 20 years to manage these ageing dams, not including predicted costs to remove many dams.

Reflecting upon the situation in Michigan, the task force warns that “the state is heading toward a grave situation with many dams if significant investments are not made in the short and medium term”.

It says that it “strongly urges” Governor Whitmer and the Michigan legislature to take “meaningful action” to advance all recommendations as “the potential human and economic costs of business as usual are far too great to ignore”.

“Ageing dams, just like all infrastructure throughout Michigan, suffer from a lack of consistent investment, which must be addressed if we want to avoid future tragedies,” says Liesl Clark, Director of EGLE in Michigan.

“EGLE is moving forward with changes we can make – such as hiring three dam safety engineers – and is eager to partner with other stakeholders to prioritise and implement these important recommendations in a timely manner.”

Evan Pratt, Chair of the Michigan Dam Safety Task Force, says: “This report was created through a collaborative effort and every element of the report garnered a high level of consensus. I am proud of the task force’s work and appreciate this diverse group, whose members share a deep and sincere commitment to improving the state’s dam infrastructure and protecting lives and the water resources of the state.

“As the Great Lakes State, we have an obligation to lead the region, if not the country, in sustainably managing the rivers and waterways of Michigan for ourselves, the many generations that will follow us, and for the natural habitats that depend on them.

“In this report, the Michigan Dam Safety Task Force presents a vision for managing dams that will ensure all dams in this state are maintained and operated safely with improved environmental quality and enhanced public safety.”