Is a hybrid between nuclear power and renewables a genuine reality? 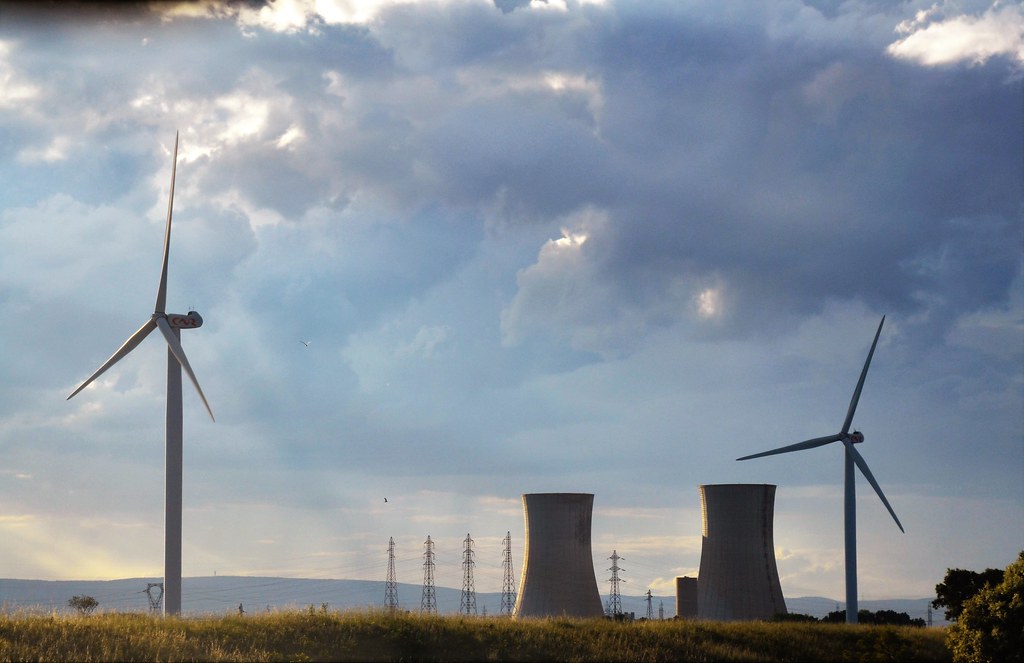 The technical challenges posed by hybrid nuclear power and renewables systems have largely been solved, but the economic barriers remain a stubbron obstacle (Credit: Flickr/Jeanne Menjoulet)

Hybrid energy systems have drawn increasing attention of late but the possibility of melding the benefits of nuclear power with those of renewables harbours the potential to revolutionise energy generation as we know it.

By performing a sort of balancing act, nuclear power can enhance the efficiency of renewables while ensuring the overall system is reliable and low carbon.

Yet while some countries have already successfully adapted nuclear power plants to be load following—that is, to provide flexible operation based on energy demand and fill the gaps in output left by intermittent sources such as wind and solar—the issue more economic than technical.

Nuclear plants require significant invesment, and as such they need to run for as many hours as possible, and it’s not economic for them to stand idle for a period of time just because the wind happens to be blowing—they generate no income during that period.

Here Aliki van Heek, unit head at IAEA, speaks to Nuclear Engineering International about the feasbility of merging nuclear power and renewables into a hybrid energy system, and the impetus phenomena such as climate change have created with regard to making such a concept a reality.

Are there any nuclear power and renewables hybrid systems operating today?

Flexible operation, or load following, is already practiced in some countries such as France, Germany, countries with a high share of nuclear power.

In France, it was already load following because with a 75% nuclear share, sometimes not all of the plants are needed.

Now, with the increasing share of variable renewables on the grid, this practice is becoming even more useful.

But this is not the case in Germany, which has a much lower nuclear share, so why are German plant load following?

Germany is interesting—when it started with nuclear energy, there was an expectation that they would follow France in its nuclear share, so load following was thought to be necessary and they therefore configured their plants appropriately.

In the end, its nuclear share didn’t grow as expected, but now its has a really high share of renewables, it can do load following without any of the adaptations that were necessary in other countries.

What types of plant are best adapted to load following?

From the technical viewpoint, gas-fired plants are the most suitable for load following because they are the most flexible and can change output in a short space of time, and it is also the most economic option in most electricity markets.

Construction costs are low but fuel costs are high, so if you keep it just for peak loads or a few hours a year, it’s the best thing to do because you save fuel.

On the other hand, with a plant that has a high investment cost, such as nuclear, you have this expensive facility which still needs to be depreciated, and which shouldn’t stand idle for a long time—so it is best for base load.

However, from the environmental viewpoint gas-fired plants may not be the best option for load following, as they emit about 30 times as much CO2 as nuclear plants, measured to the entire life cycle.

In addition, the operation of gas-fired plants requires gas (methane) transportation, which is always to a certain extent associated with leaks and losses, and methane is a gas with even a 30 times more severe greenhouse effect than CO2.

What about small modular reactors (SMRs)?

SMRs could be a better solution but not only because of their size—it could be useful to have a smart plant consisting of a number of modules.

If only a few are needed then some could be shut down completely and others run at 80%, which is better than running a big plant at 50% as that’s more technically-challenging and wasteful of investment.

Different modules could be assigned to different functions.

For example, if the electricity is not needed some modules could be used to provide heat – high temperature reactors (HTRs) for example are well suited for this.

The heat could be used for things such as hydrogen production or desalination, which are products that can be stored, in contrast to electricity.

What are the prospects for hybrid systems using SMRs?

Loosely-coupled means coupled over the electrical grid only, this already exists in various countries as discussed above.

With tight coupling, meaning also heat use and storage components are involved, a much higher system efficiency could be reached.

For this, experiments are underway, for example in the US, but these test installations are yet mostly without a nuclear component.

There have been simulations and various different options involving nuclear, but the nuclear demonstration is still needed.

Nuscale Power’s 60MWe SMR is to be built at the Idaho National Laboratory and will be a basis for demonstration—the results can then be shown to future investors.

What about SMRs as part of a hybrid system for non-power uses?

We have been talking for decades about co-generation for non-electrical applications but this is still applied at only few plants in the world.

With nuclear desalination, considerable experience exists in certain niche markets, but not yet with hydrogen production.

However, there is more interest now because of a number of policy initiatives concerning hydrogen as a fuel, like one from the European Union.

What is different from the past is that there is a new environment, with an increasing number of electric cars on the road.

Oil companies are growing concerned that there will be fewer people coming to their petrol stations, so they are considering hydrogen, and this could be a new driver for SMR.

When it comes to SMRs for the chemical industry, HTRs could be perfect technically, but there are regulatory issues.

There are already a large amount of regulations relating to chemical production without adding regulations for nuclear plants.

Are there any other possible uses for SMRs in a cogeneration system?

Recently we had a technical co-operation workshop with member states from the European region where we discussed SMRs.

One interesting development related to a member state with several remote locations which are not connected to a centralised grid.

Some depend on diesel generators for their electricity, and this could be a niche market for SMRs—they could also be used for desalination, especially in warmer areas of the world.

This may be a possibility for some Middle Eastern countries, for example, saving the fossil fuels for export.

Because of the climate change issue, nuclear is being reconsidered in some places.

The climate issue is urgent, so nuclear can contribute most to mitigating climate change by using existing plants—keeping them in operation as much as possible.

Advanced reactors should join in as soon as possible, addressing challenges like nuclear waste with their huge potential for design and materials innovations.

However, it is about how to best optimise energy production to minimise CO2 production.

Some regions in the world use a lot of solar during the day, but the setting of the sun coincides with everyone coming home from work and turning their lights on, so that electricity has to come from somewhere else.

This is when dispatchable sources have to come in—the challenge is to fit these together on the grid.

Theoretically a nuclear power plant could be switched to use its heat for desalination, for example, but again it is a question of economics.

This would not be financially viable if water is cheaper from other sources, and the same applies to hydrogen production.

If it is more expensive than the traditional methods for producing hydrogen, then it will not be done using nuclear plants unless, of course, the government intervenes with subsidies because of climate concerns.

In the end, it is up to each country to decide which technologies to include in its energy mix.