High-quality green shipping in wind power is key to the sector’s future development. But how?

Reliable, green shipping in wind is key to the industry's future. Two industry figures explain how important ships are to offshore turbines. 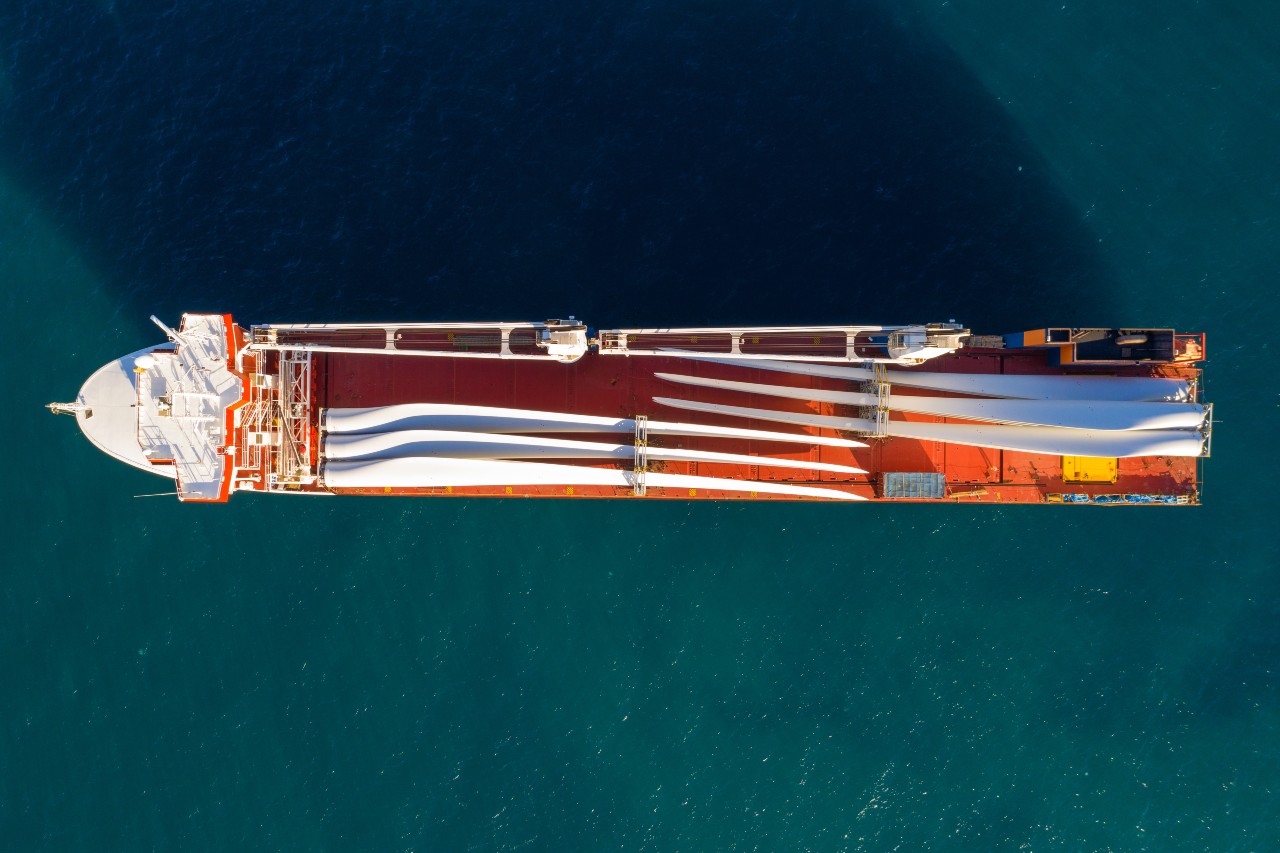 Wind farms are impossible to both construct and maintain without a fleet of ocean-going vessels on standby. With the offshore sector reaching maturity, a new generation of ships offers greater comfort and far higher environmental standards than their antecedents. Andrea Valentino chats to James Lewis, a business sector lead at BMT, and Graham Tyson, a marine specialist at MHI Vestas, about the role green shipping in wind plays in a turbine’s lifespan, how the latest models are helping engineers and the planet alike, and how these ships might develop in future.

Imagine, if you can, a patch of sea from above – that you’re gazing down on the waves and the water from hundreds of feet up into the air. If you’re not too far from land, and you’re over any number of places from the Long Island Sound to the North Sea off England, you’re likely to see more than just the brownish blue of the water. Instead, you’ll see wind turbines – hundreds and hundreds of them – lined up in neat rows as if they’re planning an amphibious landing. Stare hard enough and you’ll probably see ships too, coming and going for hours and hours, their engines puttering, their white wakes shimmering up to you.

Nor should you be very surprised by this hive of activity. From small maintenance ships, little bigger than humble fishing trawlers, to leviathans as big as football pitches – offshore vessels come in a bewildering array of shapes and sizes. Huge, too, is the appetite for new models, a product of environmental pressures forcing design changes and the realisation among operators that retrofits of existing ships will prove increasingly untenable as time goes on. Although statistics for the industry at large are scarce, the global market for installation vessels alone is forecast to reach $2.6bn by 2025, up 15% compared with 2020.

Of course, between the architectural drawings and the coastal farm there’s a canyon of hard work – not least months of meticulous research, collaboration with shipowners and specific design decisions that take several factors into account, making a new vessel perfect for the farm it’s destined to service. But get it right and shipbuilders are proving just how successful this new generation of offshore vessels can be, making life more comfortable for the crew and more affordable for the owners – even if the environmental side effectsof all these new ships risk undermining their many positive qualities. The environmental impact is an important factor for those with skin in the game.

“It’s impossible to underestimate their importance,” starts James Lewis, a business sector lead at BMT. “The vessels that make up an operations and maintenance fleet are the lifeblood of any wind farm.” That relationship, Lewis continues, begins with construction.

Turbines are generally carried out to the development site aboard enormous crane ships, with the biggest examples capable of lifting 3,000t of equipment to a height of 165m, or the equivalent of 1,100 SUVs according to one Bloomberg report. Costing a colossal $300m apiece, it’s no wonder that there are only about a dozen of these vessels anywhere in the world.

After construction, at any rate, comes the maintenance regime, which involves the use of speedy crew transfer vessels (CTVs) to whisk engineers to the site as and when they’re needed. “There is a constant requirement for both planned and unplanned maintenance of the turbine,” says Lewis, covering everything from investigating storm damage and the need for repairs, to checking that the machines are running optimally. “This ensures an optimum output in terms of energy generation, and also for the preservation and maintenance of these valuable assets.”

Skyrocketing demand for new offshore wind developments, however, promises to complicate this straightforward process. According to Graham Tyson, a marine specialist at MHI Vestas, operators are struggling to christen new vessels fast enough to keep pace with market interest, forcing them and their suppliers to repurpose similar vessels from the oil and gas sector, and sometimes even civilian ferries. The performance and size of these ships is often inadequate.

Fuel efficiency is also a problem. “These compromises were necessary in the early daysof the concept,” says Tyson, “but as we look to support more and larger projects, these small inefficiencies really add up.”

Given the recent surge of investment in offshore wind, that latter point feels doubly important. According to work by the US’s Bureau of Ocean Energy Management, the worst offenders among crew transfer vessels emit 648g/CO2 for every kilowatt-hour of fuel burned. Regular passenger cars belch out less than half that. In a different way, the fauna around wind farms can suffer too. Whales are particularly vulnerable here, one survey finding that collisions with ships off the coast of California killed ten of our finned cousins in 2018 alone.

When it was christened back in 2017, the Esvagt Mercator – built by Esvagt, a Danish manufacturer, for MHI Vestas – heralded a new dawn for offshore maintenance. A service-operation vessel (SOV),this new ship was midway in size between an installation vessel and a transfer ship, and allowed maintenance crews to essentially live at sea for days at a time, with all the environmental and organisational benefits that follow. Many like ithave since been launched, in time to meet the burgeoning demand for offshore wind farms. “If a technician can have a 12-hour working day,” explains Tyson, “and six of those hours are spent just getting to and from the turbine, that is not a great use of a valuable asset: time. This is where SOVs really have their value.

“A technician can wake up, eat breakfast and be on their turbine for the day within an hour, avoiding long transits, seasickness, commuting, parking or loading their bags. The growing size and distance from shore of more recent offshore wind projects are driving the economics of vessels so that SOVs make greater sense.” MHI is not alone in seeing the advantages of these ships. Built at a Turkish shipyard, for example, Louis Dreyfus Armateurs’s Winds of Change SOV recently started work for Ørsted. Across the Atlantic, there are plans to build a similar vessel for use off the coast of Rhode Island.

Another fruitful area of development has been in the creation of ‘service accommodation transfer vessels’, or SATVs. Smaller than full SOVs, these ships nevertheless retain enough room to house cabins for crews to live comfortably for about a week. More to the point, they’re also light enough not to displace landing crews when they sail close to turbines, and can nimbly navigate between rows of pylons without causing accidents. “These days,” says Lewis, “it simply makes more sense to have a vessel that can both accommodate techniciansfor extended periods and push up to the turbine towers for transfers.”

Whatever the specifics, all these ships do share one thing: a commitment to both environmental and crew safety. In the case of MHI, Tyson and his colleagues are looking at height-adjustable ship landings, allowing the transfer of crews between the SOVs and smaller vessels without climbing dangerous ladders. In terms of the environment, alternative fuels are gaining popularity too, while MHI’s SOVs are designed to transit at a leisurely ten knots, making it far easier for passing whales to avoid their bows.

Marrying regular engines with a new propulsion system, BMT’s attempt promises greater fuel efficiency. That, of course, would save moneyand boost the environment. Yet you can’t helpbut feel that all this activity might still come at a price. Because there are so many types of alternative fuels – from propane to ethanol to butane – it’s hard in practice to design shipsaround them. And because many of these environmentally friendly alternatives are low density, they require larger storage containersthan regular carbon fuels. To put it another way, then, it may be a while before this new generation of vessels become truly clean – ironic in an industry that prides itself on its green credentials and commitment to sustainability.

What’s next, then, for the future of offshore vessels? Though many developments are encouraging, Tyson strikes a note of caution, and not just about the environment. “The biggest challenge for the US is tailoring the design to [local] shipyard capabilities and materials to reduce the higher build cost and build time,” he says, “which requires cooperation from the whole supply chain including us, designers, yards and owners.”

Fair enough: new wind farms already cost more in the US than they do in Europe, and a lack of experience in shipbuilding can raise prices further. Lewis, though, is more optimistic. He says the industry is moving too quickly to make hard and fast predictions and expects that moves towards “greener, hybrid propulsion systems” will continue. At the same time, he adds, electrification will probably increase in popularity too. “It would make sense to harness the electricity being generated out at the farm to power the fleet of operation and maintenance vessels,” says Lewis. “As battery technology improves, this will become viable.”

Certainly, you can see that if you look at what shipbuilders themselves are saying. By some estimates, the newest models of offshore vessels are 30% more sustainable than their ageing predecessors. To put it another way, the SOVs of the future look set to be just as useful – and make the whole industry even more sustainable too.