FuelCell Energy and the US department of Energy have finalised an award to develop a coal-based fuel cell system for use in power plants. 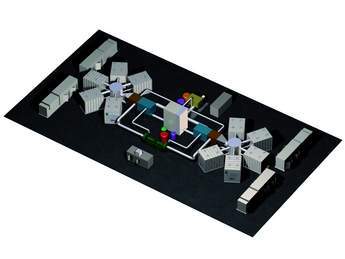 FuelCell Energy announced in late October that it had finalised terms with the US Department of Energy (DOE) for a $36.2 million Phase I award to develop a coal fuelled multi-megawatt solid oxide fuel cell-based hybrid system. This award is to provide funding for the first stage of the ten year, three-phased Fuel Cell Coal-Based Systems project, part of the DOE Office of Fossil Energy’s Solid State Energy Conversion Alliance (SECA). Total project funding for this and the other two planned phases is anticipated to be approximately $180 million.

The programme’s overall objective is to develop solid oxide fuel cell (SOFC) technology fuelled by coal synthesis gas for use in central generation power plant facilities. The advanced fuel cell-hybrid system is hoped to have an overall efficiency of at least 50% in converting energy contained in coal to grid electrical power. In contrast, today’s average US coal-based power plant has an electrical efficiency of approximately 35%.

In addition, the envisioned SOFC-hybrid system is expected to capture 90% or more of the system’s carbon dioxide emissions for environmentally safe disposal while being cost-competitive with other base load power generating technologies. The project will culminate in the fabrication and operation of a multi-MW proof-of-concept SOFC-hybrid power plant at a suitable location, using coal-derived synthesis gas as fuel. FuelCell Energy may consider submitting the project to the FutureGen Alliance Inc for possible inclusion in the FutureGen power plant. FutureGen is a planned DOE research facility to demonstrate advanced power systems that emit near zero emissions, with a substantial increase over current electric generating efficiency. In addition to electrical generation, the system will produce hydrogen and sequester carbon dioxide.

The objectives of the Phase I of the Fuel Cell Coal-Based Systems project include scale-up and performance enhancement of the existing SOFC cell and stack configuration, engineering design analysis for a proof-of-concept power plant and cost analysis. The Phase I project deliverable will be testing of a stack building block unit operating on simulated coal syngas. A further objective will be to construct an 80-100kW capacity stack tower in order to validate design components associated with a multi-stack tower. Towards the end of the programme this stack tower is to be validation tested at the company’s test facility.

FuelCell Energy uses the cell and stack design of its technology team partner, Versa Power Systems Inc (VPS), for all its SOFC development programme. VPS has been engaged in SOFC development since 1997 and is considered a world leader in SOFC cell and stack technology. The company also provided the 3kW prototype stack and system for FuelCell Energy’s DOE SECA Cost Reduction project, which was initiated in April 2003.

In recently completed testing, the 3kW SOFC prototype system operated for over 2000 hours and successfully met or surpassed all DOE performance metrics for power output, efficiency and degradation. Applicable elements of this existing SECA project will be integrated into the new project’s technical objectives, based on similarities in cell and stack development.