The newest old plant in the USA 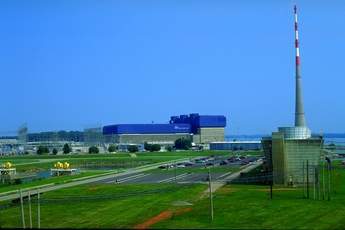 TVA is close to being able to restart Browns Ferry unit 1, an 1100 MWe GE BWR, after a shut down of no less than 22 years, which must be some sort of industry record.

The work TVA has been doing to restart unit 1 is essentially the same work that it did to successfully restart and operate units 2 and 3 at the Browns Ferry site, using the same processes, procedures, and programmes as it did with the other two units, and making use of lessons learned in the earlier restart efforts to improve performance during the unit 1 restart. The units generated first power in 1973, 1974 and 1976, respectively.

TVA began loading fuel into unit 1 on 15 December 2006 and it was completed a week later. Loading became possible because the systems needed to move, place, and maintain nuclear fuel in the reactor vessel had been returned to operability. Those systems include emergency core cooling systems, the reactor vessel and containment systems, the fuel monitoring and handling systems, and clean up and other support systems. To reach that milestone, TVA completed 10 000 discrete items from large scale design changes to fixing small discrepancies in paperwork.

Loading fuel establishes the plant conditions needed to complete and test the remaining modifications required for restart. The focus of work then turned to the turbine building and steam/water systems, including main steam, condensate, feedwater, and balance-of-plant equipment. As work is completed, personnel at Browns Ferry will continue the transition from completing modifications to operating and maintaining plant systems.

Work is being conducted according to two main processes: System Plant Acceptance Evaluation (SPAE), which identifies all the technical, industry, regulatory, and engineering criteria, tests, inspections, and other actions needed to prepare a system for operation; and System Pre-Operability Checklist (SPOC), which identifies and puts in sequence the modifications, tests, maintenance activities, and checks that need to be completed and performed on a system on a routine and ongoing basis in order for the system to be turned over to plant Operations and Maintenance.

The restart itself will of course require approval from the Nuclear Regulatory Commission, including positive assessments from an Operational Readiness Assessment Team (as would be deployed in a conventional new-build start-up) and a Restart Oversight Panel (specially convened for the Browns Ferry unit 1 project).

TVA says it is on target to meet a restart schedule and budget approved by the TVA board of directors in 2002 and that it will return unit 1 to operation in better condition than when it was originally licensed.

The work has included: improvements to the unit 1 control room; provision of larger pumps and motors to support additional generation and to give the plant additional operational margin; and fitting of state of the art digital instrumentation and controls.

TVA’s argues that unit 1 restart, which is estimated to cost about $1.7 billion, gave it the best rate of return compared with other alternatives.

Renewal of the operating licence for 20 years over and above the original 40-year licence helps keep TVA financially flexible by giving the company a strong generation asset with proven operations, low fixed cost, and the ability to control variable costs. It also improves the generation mix and helps ensure a reliable power supply, says TVA, while the stability of nuclear fuel prices compared with the volatile prices of other fuels helps stabilise the fixed costs of operations.

TVA also believes the restart was the best thing to do operationally, with TVA peak demand progressively increasing and existing baseload units at operating at full stretch, and environmentally, with zero carbon emissions and thermal issues mitigated by the rebuilding of a cooling tower.

Blue skies ahead for Browns Ferry? TVA analysis of why it thinks restart of Browns Ferry unit 1 makes economic sense