Taking the plunge for precise control 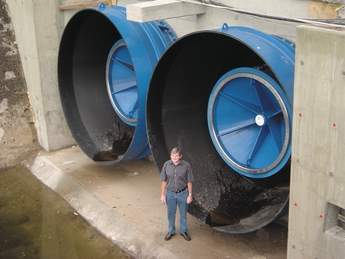 As early as the 1930s, the performance requirements of water supply systems and hydropower stations increased in such a way that pipeline diameters and pipeline lengths, as well as operating pressures and flow velocities, became considerably higher. The early shut-off devices used – mostly wedge gate valves – had to be optimised and adapted to meet the increased demands. Despite the fact that wider sealing rings were used and wedge guides were reworked or extended, in the end the gate valve was considered to be unsuitable for meeting new requirements.

The plunger valve is a straightway control valve, i.e. it has an annular flow cross-section in any position. Inside the body, the plunger (also referred to as piston) is moved axially in the flow direction by a crank gear towards the sealing seat of the valve. Plunger valves are control and regulating devices which generate different pressure losses in pipeline systems by way of continuous narrowing towards the seat to change the flow rate depending on the regulating distance. Depending on the application, the nominal diameter of the valve has to be large enough to ensure that at the lowest pressure difference the highest required flow rate is achieved and/or that maximum differences in pressure are reduced without causing cavitation. In addition, any damage to the down-stream pipeline system or structure by vibration or cavitation must be prevented over the entire regulating dis-tance.

VAG has evolved the plunger valve, to make it suitable for control tasks in water supply systems. Today’s VAG RIKO Plunger Valve is available in almost all nominal diameters between DN 150 and 2000 and in pressure ratings ranging from PN 10 to 40. A great number of plunger valves are in use world-wide, even valves of sizes DN 600 and DN 800 with a nominal pressure of PN 100. In all sizes and pressure ratings, the compact body is made of premium-quality ductile cast iron EN–JS 1030 (GGG 40). Up to DN 600, the inner parts are made entirely of grade A2 stainless steel as standard. For all nominal diameters up to and in-cluding DN 2000, the piston is guided by bronze-welded longitudinal guides. This ensures optimal longitudi-nal guiding and thus the backlash-free sliding of the plunger with very low operation torques at the same time.

The body consists of one piece and the inner body is connected to the outer body by ribs. On the inlet side, the inner body has a spherical shape. The design of the annular space results in a continuous narrowing towards the seat. The piston or plunger is moved by an internal crank drive. New sealing systems for the body seat, the plunger and the shaft bearings have been developed to provide absolute corrosion protec-tion, excellent performance and a long service life. Due to the fully enclosed bearing, no fluid can penetrate into the bearing, to ensure high durability. The sealing of the shaft was adopted from the proven sealing prin-ciple of the VAG EKN Butterfly Valve, i.e. the shaft is sealed by a double O-ring seal. Inside the valve, be-tween the body and the plunger, a quadring seal sealing on four sides is used as a double seal. It is resis-tant to twisting and ensures permanent tightness even under high stress cycles. The valve seal at the seal-ing seat was arranged in the no-flow zone in a way that prevents stones and pebbles from causing damage to the valve seal and minimises wear of the seal. All seals are approved to W 270, which allows their unre-stricted use with drinking water.

Plunger valves are modulating valves which, according to the throttling principle, generate pressure losses in pipelines to change the flow rate according to a desired characteristic depending on the regulating distance. The nominal diameter of the plunger valve and its regulating behaviour are always dependent on each other. However, they can only be determined one after another and then have to be adjusted to each other. Their regulating behaviour is always influenced by the resistances present in the entire plant. This means that the longer the pipeline, the higher the resistance, and the larger the total of the resistances present in the plant is in relation to the resistance of the open plunger valve, the lower the throttling effect will be.

Due to its linear control characteristic, the VAG RIKO Plunger Valve ensures excellent cavitation behaviour and very little pressure loss at the same time. Its outlet type is variable and, coming as a kit, allows the change of the valve characteristic. This is an essential advantage as the valve can be adapted to changed operation conditions even after its delivery. Depending on the application and the operation specifications, different types of outlets such as standard seat ring, orifice cylinder or slotted cylinder as well as various cus-tomised cylinders to prevent cavitation are available.

A highlight of the most recent version – VAG UseCAD 6.1 – is the automatic generation of 3D images of vari-ous types of valves. The -D solid models generated with VAG UseCAD 6.1 can be exported into all common 3D formats such as DWG 3D, IGES 3D, SAT 3D or STEP 3D. Special attention has been paid to the so-called critical valve components as their movability can have a decisive influence on the alignment of the plant.

The function of pressure loss calculation rounds off the valve catalogue. This additional program allows the calculation of the pressure losses developing during flow – over the entire range of various pipeline ele-ments. With its user-friendly addition of the valves and pipeline components used, such as elbows or divid-ers, the program calculates the resulting pressure loss. The results can be exported and can thus be adopted into the user documentation fast and easily.

VAG plunger valves are suitable for use with raw water, drinking water and cooling water with temperatures of usually 50° C. The main fields of application of plunger valves include: conveyance of water in catchment basins and dams; bypass lines of hydropower stations; long-distance pipelines; water treatment in water-works; water supply in pump stations; supply control of elevated tanks; drinking water networks; and cooling water circuits of industrial and power plants.