The US Army Corps of Engineers is undertaking dam safety training in a virtual university environment. Nancy J Sticht explains how retiring engineers are passing on their expertise to younger colleagues in this unique program 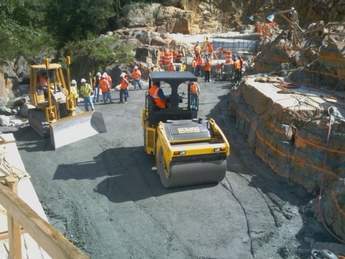 When six-year-old Juan Sanchez accompanied his father, a US Army Corps of Engineers (USACE) contractor, to work at Cerillos Dam in Puerto Rico in the early 1990s, he knew he would someday become an engineer. Little did he know that he would so closely follow in his father’s footsteps by having a unique role in building another USACE dam in Puerto Rico.

After earning both his bachelor’s and master’s degrees in civil engineering at the University of Puerto Rico at Mayaguez, Sanchez joined the USACE New Orleans District in 2008, where he worked on the Hurricane and Storm Damage Risk Reduction System. Sanchez obtained his Professional Engineer licence in May 2009 and in November 2010 was selected to participate in the USACE’s virtual Dam Safety University. Here he worked alongside Jacksonville District’s team on the construction of Portugues dam, USACE’s first ever RCC dam.

“I think that exposure to many areas of dam construction gave me an excellent understanding of the critical dam components as well as the risks during and after construction,” says Sanchez. “I thought that [the Dam Safety University] would be something more like class training and then some field training.”

In fact, what makes the Dam Safety University unique is that it is located, not in a classroom on a college campus, but on field sites across the nation where USACE is rehabilitating flood risk reduction projects, such as at Herbert Hoover Dike in south Florida, or building a new dam using new, cutting-edge techniques, such as Portugues, the final component of the Portugues and Bucana River flood risk reduction project.

“The goal of this program has always been to provide a learning opportunity for our engineers and geologists that is second to none – actual hands-on experience in applying engineering solutions to some of our most challenging projects,” explains Stephen C Duba, Jacksonville District’s chief of Engineering Division. Other USACE projects that host university assignments include Wolf Creek Dam in Kentucky, Center Hill Dam in Tennessee, Clearwater Dam in Missouri and Canton Dam in Oklahoma, where the world’s largest fuse gate spillway is being built.

The Dam Safety University is one of the ways in which USACE is implementing succession planning, since many of its dam safety engineers are nearing or have reached retirement age. Before the former Chief of Engineers, Lt Gen Robert L Van Antwerp retired in May, he had challenged USACE’s dam safety engineers to ‘build the bench’ by sharing the benefit of their knowledge and experience in teaching young engineers through programmes such as the Dam Safety University.

As USACE enters an era of dam remediation there is a need to prepare lead engineers, and the university program has now been further expanded to include training opportunities in risk assessment with members of the Risk Management Centre (RMC) in Pittsburgh, Denver or Louisville, or in the latest in inundation mapping with the Modeling, Mapping and Consequence Centre (MMCC) in Vicksburg. A primary role of the RMC is to enhance professionalism and technical competency by championing dam and levee training functions.

Karen Gonzalez, civil engineer with USACE’s St. Louis District, completed a six-month university assignment at Portugues Dam in May 2011. Like Sanchez, she is a graduate of the University of Puerto Rico at Mayaguez. Currently an Engineer-in-Training, Gonzalez worked as a construction inspector for the US Department of Housing and Urban Development and in private industry before joining St Louis District almost two years ago. She was certified as an ACI Grade 1 field testing technician prior to her assignment in Puerto Rico.

“One of the most important issues facing the dam safety community is the risk of structural failure of materials used in dam construction,” says Gonzalez. “Another is instrumentation, which is used to monitor the behavior of the structure during its life.” The course opportunity to observe the placement of instrumentation and learn about construction project specifications.

Gonzalez says that everything from the experience will benefit her professionally, and she will be able to apply what she learned about construction project specifications and the Resident Management System to her work upon her return to St Louis District.

“I think the programme is an excellent strategy for the Corps to develop its professionals,” she comments. “I look forward to contributing to the dam safety efforts of our agency and beyond in the future, in any way I can.”

As for Sanchez, he recently transferred from New Orleans to Jacksonville District, to work as a project engineer on the Herbert Hoover Dike rehabilitation project in south Florida. “I’m so happy that I had the opportunity to be 100% in the field and learn empirically,” he says. “I’m now applying all that knowledge on the Herbert Hoover Dike. This experience fulfilled all my expectations and went beyond.”

Sanchez adds that he would strongly encourage others to take advantage of the ‘opportunity to be part of this magnificent training.’

Through this unique program, team members gain valuable professional development and the Corps gains sustainability for its dam safety programme. With the hallmark of a learning organisation, and a firm foundation of historic success, the US Army Corps of Engineers is building strong by preparing its talented young professionals to carry on the proud tradition of those who have gone before.