The structural integrity of Chun-In dam was compromised by excessive seepage at the toe of the earthen structure. Hu Yu Ming and Hu Ming Chun describe how a Smart Drain Belt was installed to control the seepage at the Chinese project 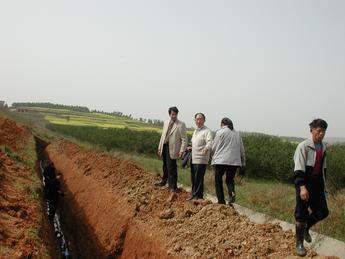 Chun-In reservoir is located near Dontin lake, about 22km to the north of Lin-Li County in Hu-Nan Province, People’s Republic of China (PRC). It was designed for irrigation, electricity and flood control purposes, and encompasses a basin area of 20.2km2 and a total reservoir capacity of 14,800,000m3, with an average water depth of 14.2m. The earthen dam holding back the reservoir was constructed in 1959 with homogeneous soil. After completion, seepage along the down stream side of the dam gradually became significant and the left side of the embankment became over-saturated, causing erosion and deformation of the embankment slope. Over time, the total seepage flow along the edge of the saturated embankment reached 80 litres per second. After several drainage and split grouting solutions failed, the Reservoir Authority reluctantly resorted to cutting the reservoir’s storage capacity in half.

During construction of the dam, the homogeneous soils were not compacted according to specifications. The non-uniformity and low density of the soil created a permeable layer resulting in a soft plastic condition on the phreatic surface. Consequently, seepage flow became greater year after year. After years of percolation, the seepage flow gradually began to carry soil fines causing internal erosion and deformation of the embankment, seriously endangering the structural stability of the dam.

According to historical records, the drainage system was not well constructed, resulting in heaving, expansion and floating on the downstream side of the dam, and rehabilitation projects were not carefully executed. For example, in 1982 a split grouting curtain was constructed, but not according to the design specifications. More recently, a drainage trench solution also failed.

In 1999, 40 years after construction, 22 site soil samples were tested in a laboratory showing that the horizontal permeability was 8.95×10-4, larger than design expectations. Based upon stability calculations using updated permeability values, the percolation gradient was estimated at 0.1 and the phreatic surface elevation was determined to be 62.5m, large enough to cause failure by erosion.

Theoretically, even with a maximum percolation gradient of 0.1, calculations showed that the structure would remain stable if it had a working drainage system at the toe of the dam.

Two types of percolation control – horizontal and vertical – were evaluated. Both solutions would lengthen the distances of seepage flow to decrease the percolation gradient and improve the stability of the dam. Trench drains, bleeder wells and aggregate filter drains were evaluated as preferable and more economical and reliable alternatives to a vertical drain solution. The comparisons of each system are summarised below:

High pressure jet grouting wall: Using a wall thickness of 0.2m, 318 holes were drilled (with a total drilled length of 4286m). This solution failed after construction.

Aggregate filter drain : In this case, the axial length at the bottom of the dam was 280m. The estimated cost of installing the drain was RMB1.02M (US$126,134) and was deemed too expensive.

Smart Drain Belt : In lieu of the aggregate filter drain, Smart Drain was utilised at Chun-In to control the seepage. Smart Drain is a new tool for subsurface drainage. It utilises gravity and capillary action to prevent clogging. The capillary action of its micro siphons separates water and soil instead of filtering, preventing the migration of soil fines that are the leading cause of conventional drainage system failure. Smart Drain also utilises a siphoning action that creates negative pressure, resulting in improved flow rates.

Characteristics of Smart Drain belt include:

• Non-clogging – utilises gravity to separate water from the soil to prevent clogging.

• Aggregate free – may be backfilled with the excavated soil on the jobsite.

• Flexibility – it is designed to conform to the ground surface without possible damage by compaction.

• Low cost and easy to handle – only trench excavation is necessary.

Eight months after the Smart Drain belt was embedded in the reservoir, the phreatic surface seepage was confirmed to be at the bottom of the dam (54.5m). According to the observation records, the Authority adopted the GOECRDI percolation calculation procedure (based on China Science Institute regulation) to analyse the stability of the dam. Percolation stability for down stream side depends on three conditions: a) flood water level, b) designed level and c) normal water level.

Testing tanks were constructed with the following dimensions: length x width x height = 50cm x 50cm x 65cm. Drain belt was embedded into tanks with one end extending through a side of the tank. The soil thickness below the belt was 0.2m, and the belt was covered with soil to the top of the testing tank. Water was poured into the tank to observe the drainage outflow.

After embedding Smart Drain belt into the tank, the soil samples were compacted in layers. Water was then poured into the tank. Ten minutes later water started draining out from the belt, and flow rates were proportional to the permeability of the samples. The flow rate data was recorded and is shown in Table 7. The results showed that:

• Percolation will not necessarily result in failure, only if the percolation flow gradient is too large. Chun-In reservoir’s previous drainage systems failed, and Smart Drain belt was considered the best choice for rehabilitation at the downstream side of the dam.

• Smart Drain belt relieves the pore pressure inside the slope of the dam without causing erosion, thus protecting the stability of the structure.

• According to the tested observations, Smart Drain belt is the best alternative to traditional aggregate filter drains, being effective for both filtering and draining oversaturated soil.

As demonstrated by the evidence here, the use of Smart Drain belt to replace a traditional aggregate filter drain in Chun-In reservoir provided a low cost, reliable and effective solution to the dam’s seepage problem. The phreatic surface was significantly lowered to the bottom (54.4m) of the dam. After slope anti-slip calculations were made, the safety factor is also within the range of the specified requirements.

Smart Drain’s capillary and siphon actions effectively released the pore pressure inside the slope, preventing destruction of the dam due to upheaval, piping, erosion, and flowing avalanche. The phreatic surface elevation was dramatically reduced (from 59.1m to 54.2m), proving it to be an effective seepage control system. In laboratory tests, a soil sample from the reservoir (K=1×10-7 ) with a clay content of 20%, had a drainage flow rate proportional to the water head and did not clog.

Smart Drain has also reduced the investment costs of the rehabilitation project; according to the budget records by Hu–Nan Province Hydrology Bureau, the traditional aggregate filter drain solution would have cost RMB 1,020,000 (US$126,088). The Smart Drain solution cost only RMB100,000 (US$12,361) .

After eight months of constant observation, the drainage water flow rate is proportional to the water level of the reservoir. The drainage water is also very clear indicating that no small particles of soil are being carried out.

In October 2003 the authors revisited Chun-In reservoir, and discovered the embedded Smart Drain belt remains working very well, with the reservoir water storage back at the designed level.