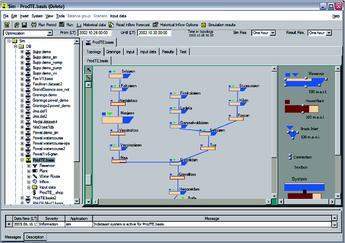 ELECTRICITY markets worldwide are being deregulated and opened to cross-border competition. Prices are being set by power exchanges and independent system operators, which must be mindful to balance supply and demand every hour of the day. As a consequence, power companies need tools that help determine how much energy to produce hour by hour in accordance with fluctuating price forecasts, in order to maximise revenues.

Power companies with hydro power generation capacity have great opportunities for utilising the new possibilities introduced by deregulation. While thermal power stations are well-suited for covering a steady base load, hydro is ideal for balancing the rapid variations in demand. Thus, hydro power generation should – to the extent possible – take place in peak power periods with high prices.

Most hydro power systems consist of several reservoirs, power stations and watercourses that together form a complex hydrological system. In particular, rivers with many cascaded power stations and variable time delays downstream on the river are difficult to utilise in an optimal way. Increasing the generation in an upstream power station during peak price periods might later cause excess water to arrive at downstream power stations during low price periods. There might also be restrictions on water discharge in the river, or on reservoir levels. Such restrictions might vary during the year.

Finally the weather conditions, like precipitation and temperature, can cause the water inflow to vary significantly during the year, and from year to year. The ‘fuel’ supply situation for hydro power is uncertain, and needs to be predicted by combining historical data with weather forecasts.

To help manage these challenges, energy software and services provider Powel, with SINTEF Energy Research Institute, has developed Powel ICC (Integrated Control Centre), an integrated software module with user-friendly interfaces to integrate the entire planning and scheduling process, starting with long-term planning up to five years ahead and resulting in Autopilot-based execution of plans in real time at the individual power station. Examples of how the Powel ICC works are described below.

The operator at the control centre will normally receive production plans for next day from a planning department. These plans may be on a detailed per-unit level, or be rougher plans on a per-station or per-river level. If the plans are not detailed down to the unit-level, the operator will use the Simulator (Powel Sim) and possibly the Optimizer (Powel Shop) to make detailed plans for next day. The short-term plans – in MW or discharge per unit – are prepared with hourly or 15 minute resolution. During the day, the operator will use the same tools to make changes in plans, due to events like:

• The need to provide regulation power, on request from the independent system operator (ISO).

• Unexpected changes in inflow, e.g. due to heavy rainfall.

• Trades on any intra-day market

Some customers have a tight integration between the Powel planning software and the SCADA system. In this case, the Powel Autopilot will cause all changes in the plans that are approved by the operator to be executed automatically. The Powel Autopilot will change generation level by sending new set points to the SCADA system, in time to allow the physical changes of gate positions, valves etc. to take place.

The Powel solution typically includes a set of on-line balance reports that are used by the operator to monitor the actual generation level relative to plans and local demand. Such reports are easily tailor-made using the Powel Time Series Calculator.

Some power companies need to plan their generation for next day in order to achieve the best possible balance between generation and local demand. The local demand for the next 2-10 days might be forecasted using the Powel Demand forecasting module.

In regions with lots of snow, the inflow contribution from snow melting during springtime is particularly important. A snow model in Powel Inflow calculates the effect snow melting has on inflow.

The Simulator is used to calculate the actual inflow per hour for the past day. This calculation is based on metered data, like reservoir levels and production levels. By calculating the actual inflow close to real-time, the trend in inflow changes may be monitored at any time. The calculated, historical inflow may also be used to increase the accuracy of the inflow forecast.

When expected inflows are calculated, these are fed into the Optimizer (Powel Shop) together with current reservoir levels and information regarding water on its way downstream of the watercourse.

The Optimizer is then run with different market price levels to produce a set of scenarios, showing optimal generation level per hour as a function of market price. The result of this price scenario analysis is used to generate spot market bids for different price levels. The Powel Trade system may be used to transfer the bids electronically to the Power Exchange.

Placing day-ahead bids at the spot market is normally done before noon. The Power Exchange will then return spot market contracts with volumes and prices per hour a few hours later. Once the spot market contract is settled, the planners will re-run the Optimizer in order to plan the contracted generation in an optimal way. At this stage, the use of different units is optimised in order to generate at the lowest possible cost. The most important costs are ‘fuel cost’ and start/stop costs. In a hydro power system, the ‘fuel cost’ is based on a calculated value of the water in each reservoir. The concept of ‘Balance Areas’ in the Powel solution allows several watercourses to be optimised in one run, to fulfil a total production volume. The system will suggest higher generation in watercourses where the water value is low, e.g. if there is risk of spill due to high expected inflow in some watercourses, the system will automatically shift generation to these watercourses.

The simulator (Powel Sim) is used to perform a detailed simulation of all plans from the Optimizer. This ensures that all consequences of the plans are analysed, taking care of the detailed hydrological behaviour of the entire watercourse. If the optimal solution for some reasons may not be used, a change of plans may be made manually and analysed using Powel Sim.

The simulation result for different plans can be stored in separate scenarios. The generation cost for each scenario is automatically calculated and may easily be compared, to see what actual effect a change of plans has on generation cost.

Powel Sim automatically performs a station optimisation, by distributing the total station generation on the available units in the station. Based on efficiency curves for each turbine, Powel Sim will try to run on best point. In periods with high market prices, the optimal plan from Powel Shop will require the station to run above best point.

In most countries, the System Operator (ISO) has established a regulating power market with day-ahead price settlement. During the afternoon, the power companies that want to participate in the regulating power market must quote prices to reduce or increase generation the next day. Such bids may also be changed during the day, up to a few hours before the actual delivery hour.

In order to place profitable bids on the regulation power market, operators and planners need an up-to-date overview of available capacity and marginal generation costs. The Optimizer is used to analyse how much power should be offered in the regulating power market, at different prices. The total cost to generate one more MW is calculated per unit, including water values, start-up costs, and grid access costs. The system also calculates available capacity per timestep at aggregated level, taking into account the existing trades.

The regulating power bid may finally be transferred to the ISO electronically, using the Powel Trade module. Powel Sim also calculates plans for system data like frequency adjustment range and spinning reserves. This data can be transferred automatically to the ISO.

The Powel long-term Generation Optimizer is used to plan the overall usage of water resources from a months-ahead and even years-ahead perspective. To cope with the uncertainty of inflow, historical inflow data for 20-80 years are normally used. Future market price expectations are input from external sources, or calculated by the Powel Market Analyzer.

Some important results from the long term model are: suggested generation level per week, as seen from a long term perspective; water values per reservoir, at the end of a given planning period.

These results are used by the short-term Optimizer in several ways. The simplest way is to use the long-term model for deciding the weekly generation level. This information is used to set up restrictions e.g. on reservoir levels at the end of the week for the short term planning. Powel Shop is then used to make optimal, detailed plans for the week (on a per hour, per generator level). The long-term planning will then decide how much water to use during the week, while Powel Shop decides when the water should be used to earn as much money as possible.

The model of the watercourse is built by ‘drag and drop’ from a palette containing the main watercourse components. When a new object is dropped into the topology picture, a form appears where all required attributes are entered.

The Powel ICC solution utilises the features and robustness of the ORACLE database system. The solution is highly modular, implemented with Microsoft .NET development tools in programming languages C++ and C#. It runs under Windows 2003 or XP operating system, commonly combined with Citrix MetaFrame.