Engineers have completed the first phase of the Deer Creek dam modification project, aimed at protecting it against earthquake damage. Brandt Demars reports 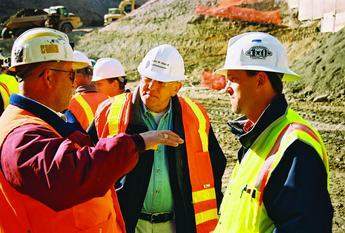 THE US Bureau of Reclamation’s (USBR) Upper Colorado region took another large step towards its goal of achieving earthquake risk reduction, through the Safety of Dams Act of 1978, when the Provo area office substantially completed Phase I construction activities on the Deer Creek dam modification project. The prime contractor completed all earthwork on 24 December 2003, just two days before Salt Lake City’s record-breaking snowfall event and nearly two months ahead of schedule.

Deer Creek dam is a zoned earth and rockfill structure located at the head of Provo canyon in a relatively high seismic area of the Wasatch mountain range. Although situated only around 25km from Provo, Deer Creek reservoir is a significant source of culinary water for Salt Lake City and other metropolitan areas. The dam was constructed by USBR between 1938 and 1941, with a hydroelectric plant added to the facility during the mid 1950s. The dam is 72m high and has a full-storage capacity of over 188Mm3.

Initial work began with the Deer Creek safety of dams investigations in the early 1990s when USBR’s own regional drill crew mobilised to the site and commenced drilling exploratory holes in the dam’s foundation.

Deer Creek project geologist Gary Dow says: ‘we wanted to define the alluvial geology in the foundation and determine the engineering characteristics of that alluvium.’

The data obtained from these holes indicated the existence of several layers of low density cohesionless soil between bedrock and the dam’s downstream foundation. These layers of in-situ earth (not part of the dam embankment constructed by USBR) might have liquefied in a large seismic event, causing the dam itself to slump and subsequently overtop and fail. A seismic ‘upgrade’, costing approximately US$10M, was therefore deemed necessary to avoid the potentially catastrophic failure of Deer Creek dam during a large earthquake.

USBR engineers, in cooperation with the Utah Department of Transportation (UDOT), came up with a multiphase solution to the overall problem of seismic instability. They would begin the upgrade by removing and subsequently replacing a large portion of liquefiable soil in the downstream foundation. UDOT would then follow up USBR’s contract with one of its own, involving the construction of a large berm across the dam to support a new four-lane bridge spanning the existing spillway of the dam. When the project is complete, the dam should be able to withstand an earthquake of magnitude 7.5 on the Richter scale.

In order for USBR to safely excavate a keyway (or shear key) in the downstream foundation of the dam, a large portion of the site needed to be completely dewatered. This called for a lowering of the groundwater table of over 15m, a feat not easily accomplished. However, when it appeared that the state of Utah was heading into its fourth consecutive year of drought, engineers jumped at the opportunity to do the project while the reservoir was at a 42 year low. In early 2003, the region’s drill crew once again mobilised to Deer Creek and began drilling and installing a series of dewatering wells around the perimeter of the upcoming excavation.

In May 2003, a contract was awarded to Foothill Engineering and Dewatering, Inc, of Corona, California to pump groundwater from the dam’s foundation for the duration of Phase I construction activities. By the end of June last year, the dewatering system had been installed and was pumping over 15,000l/min out of the foundation and into the Provo river.

The large excavation contract was awarded to Frehner Construction Company of Las Vegas, Nevada, the following month. By the end of July, the contractor had nearly completed removing the rockfill from the face of the dam and was ready to begin full-scale excavation of earth material. Although the excavation contractor was working at an accelerated pace, dewatering progress had slowed and groundwater levels were far from an acceptable level for safety and stability.

In what became an urgent situation, the region’s drill crew dropped what they were doing to return to Deer Creek dam. They were able to drill and install eight additional highly productive dewatering wells around the ongoing excavation.

Drill crew foreman Scott Jensen says: ‘we delayed a drilling project at Jackson Gulch dam in Colorado and mobilised to Deer Creek at a day’s notice. We then combined our own resources, and with some assistance from the [USBR] Pacific Northwest region’s drill crew, were able to complete the work.’

With the additional dewatering wells in place, the excavation was able to proceed safely and without further delay.

One of the most critical aspects of the project involved the construction of a large excavation support wall. This 3000m2 wall made from soldier piles (vertical steel I-beams placed in the ground) and timber lagging was held in place by horizontal steel anchors varying from 24-45m in length. This temporary wall supported the spillway and right groin of the dam and allowed USBR to remove an additional 35% of the liquefiable soil from the foundation.

On 29 October 2003, both the excavation support wall and the excavation itself were completed. USBR engineers and geologists gave the contractor the green light to proceed with backfill operations, including an engineered vertical sand filter and gravel drain to dissipate the build up of seismically induced pore pressures, as well as a shear key consisting of dense, well-graded granular soil of high shear strength. Frehner Construction completed the government’s earthfill milestone by the second week of December 2003.

By the time the contractor demobilised equipment from the dam site at the end of last year, they had excavated over 252,000m3 of earth and rock material from the dam’s downstream foundation and replaced most of that amount with engineered fill. For the support wall alone they installed 125 steel soldier beams, over 2700m2 of timber lagging, and over 380 steel ground anchors in less than three months. All this was done without having to alter the normal operation of the reservoir; not a drop of stored water was released due to the construction project.

The Provo area office field engineering group is now preparing to return to Deer Creek dam for the second phase of the modification project. The estimated US$60M UDOT contract is anticipated to begin in mid summer 2004, with work at the dam commencing immediately thereafter. This phase of the work is expected to last between 18 months and two years, at which time USBR will re-evaluate the overall safety of the dam and determine whether or not a third phase of construction is necessary.