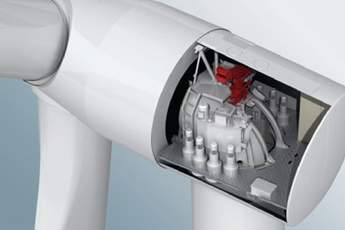 For a while now it has been known that, in the pursuit of lower top weight, Siemens Energy was working on a direct drive mechanism for wind turbines. It chose the European Wind Energy Conference and Exhibition in Warsaw in April to launch the result of that development – its new 3 MW direct drive wind turbine for onshore and offshore deployment.

The new unit, designated SWT-3.0.101, is based on the same tower, blades and hub as the company’s 2.3 MW unit, the STW-2.3-101, and has many electrical components in common includng the controller, but occupies a smaller nacelle and offers a completely new direct drive concept by introducing a permanent magnet generator to the train. This results in fewer components (half as many, says Siemens) compared to a conventionally geared wind turbine, and with far less than half the number of moving parts, the new wind turbine should require less maintenance, enabling it to deliver increased profitability for its users. It also increases power output and power density (as reckoned by nacelle weight). The relevant figures are given in Table 1.

The unit has, like the 2.3MW unit, a rotor diameter of 101 metres and is now available for sale to onshore and offshore projects around the world. ‘Our new SWT-3.0-101 will offer 25 percent more power than our present 2.3 MW machine, but with a lower weight and only half the parts’, said Henrik Stiesdal, chief technical officer of the company’s Wind Power business unit. ‘Our main target for the new machine was to reduce complexity in order to increase reliability and profitability. We are confident that our new direct drive wind turbine is a reliable investment in the future of power generation.

In designing a wind turbine, a holistic view of the design and construction, materials, processes, manufacture, and installation is critical. With the SWT-3.0-101, Siemens started with the ambitious aim of reducing the number of components by half, while increasing performance. Thanks to innovative engineering, says Siemens, that vision is now a reality.

‘Since it was installed last year, the performance of our first prototype has been excellent’, says Stiesdal. The next step, the zero-series, with up to 10 SWT-3.0-101 wind turbines, will be installed in various parts of the world during 2010. Commercial serial production is expected to commence in 2011. ‘As with our previous machines, we will run a controlled ramp-up programme with the SWT-3.0-101’, adds Stiesdal. ‘This careful introduction of new products reduces risks for our customers and boosts the reliability and profitability of our technology.’

Probably the most signficant design features are in the running gear, which features a new, gearless drive train design with a compact, synchronous generator excited by permanent magnets. The generator of the first prototype machine, which was installed in Denmark in 2009, was produced by the company’s large drives division. The gearbox is always the most complex component of a wind turbine. Eliminating the gearbox reduces complexity and increases reliability.

The main advantage of permanent magnet generators is their simple and robust design that requires no excitation power, slip rings or excitation control systems. This leads to high efficiency even at low loads.

The whole improves efficiency and reliability, because there are no slip rings, and leads to a solid compact lightweight structure suitable for offshore applications.

The rotors are manufactured using the company’s patented ‘IntegralBlade’ technology. The blades are made in one piece from fibreglass-reinforced epoxy resin in a single closed production step, only using core material when structurally needed. As a result, there are no glue joints, which helps minimise the risk of environmental effects on the blade. The blade design, known as ‘Quantum’ has a new aerodynamc profile that helps with redistribution of loads. A flat back aerofoil ‘opens up’ the trailing edge of the blade giving increased lift. All this leads to superior blade load management, increased performance and reliable blades. Critical areas of the blade are subjected to ultrasonic inspection during manufacture.

The passive cooling system known as ‘Liquidlink’ is a simple robust system ready for offshore deployment and of high efficiency owing to its two stage operation that responds as a function of power output. The water cooling system rejects heat through top mounted cooling radiators situated on the rear of the nacelle. The generator’s dual cooling system provides even cooling and increases coolant life expectancy.

A major advantage of the new machine is its compact design. With a length of 6.6 metres and a diameter of 4.2 metres, and at 73 tonnes, smaller and lighter than any other unit in this output class, the fitted out nacelle can be transported in one piece, using standard vehicles commonly available in most major markets.

The dimensions of the new wind turbine also allow for greater flexibility in road transportation. Key bridge and tunnel clearance specifications have been carefully considered when engineering the machine, and as a result, the 3.0 MW turbine can navigate many of the most demanding transport routes.

One clear advantage of the new nacelle’s size is that as it can be transported in one piece the operation minimises the expense of on-site assembly, an especially risky option for critical and vulnerable components. The compact system design, with its reduced number of rotating wear parts, is also a good basis for deployment onshore, offshore, and in coastal areas.

The nacelle has a simple bedplate structure and exhibits strongly reduced complexity with reduced number of parts. There is direct internal access to the hub, and the unit is totally enclosed.

As well as leading to a solid, compact and lightweight structure, optimum reliability and serviceablity, ready for offshore applications. But despite the compact design, there is actually more space for service technicians to carry out their operations. The drastic reduction of parts has created a relatively spacious environment within the nacelle, where key components are readily accessible.

The “plug and play” nature of components allows most components to be interchanged without impacting other components. Maintenance can be carried out as part of standard service contracts.

Of the five key components in a wind turbine – the blade, rotor hub, nacelle, tower, and controller – all but the nacelle are adopted from the existing Siemens’ portfolio. By this means Siemens hopes to reduce the element of risk and of variability and therefore of increased service and repair cost always associated with the introduction of innovative products.

Grid stability and grid compliance requirements grow as more wind power is fed into the grid.

In this case power conversion is implemented by the Siemens’ ‘NetConverter’ system. This system is characterised by full conversion of the power generated, efficiently decoupling generator and turbine dynamics from the grid. The NetConverter system can offer maximum flexibility in the turbine response to voltage and frequency control, fault ride-through, and output adjustment. As a result, the turbines can be configured to comply with a variety of relevant grid codes in major markets and can be readily connected to the grid.