H.Tosun introduces the results of FEM analyses performed for Sanliurfa Tunnel in Turkey, the longest water conveyance tunnel in the world 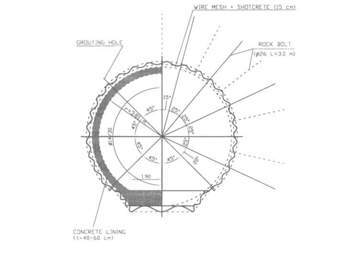 The Sanliurfa tunnel system is one of the most important aspects of the Southeastern Anatolian project in Turkey. Located between Sanliurfa city and the Atatürk dam reservoir, it was designed to convey water from Atatürk dam reservoir to the Harran plain while generating electricity at its outlet. It is a pressurised tunnel system with an internal water pressure of approximately 400 kPa. The system consists of two concrete-lined (double tube) tunnels each 26.4km long and 7.62m in diameter. Their excavated diameter is approximately 9m. The tunnels will convey 328m3/sec of water at an average flow rate of 3.5m/sec that will be utilised for the irrigation of 4.63105 ha of land in the Sanliurfa and Mardin Plains, when fully used in operation stage. The excavation work and installation of the support system was completed in 2003, but contact grouting is currently underway.

The temporary support system consists of shotcrete and rock bolts. Shotcrete is applied in double layers (15cm thick) with wire mesh combined with rock bolts 3m long with 232m spacing. Cast-in-place concrete lining of varying thickness (minimum 40cm) provides the permanent support of the tunnels (Figure 1). Excavation was performed in three steps by tunnel boring machines (TBM) and locally by blasting. The rate of advance of the TBM was 6m per day (Tosun, 2001 and 2002).

The permanent support system of the tunnels include concrete lining with various thickness. Tosun (1985) investigated the performance of concrete lining by four different 2-D models of finite element method. In the study, one-step construction sequence was assumed for all models and the gravity load was applied after excavation of the tunnel and installation of the supports, as an external loading condition described by Einstein vd. (1980). The major difference between the models was only at the loading conditions. The weight of loosened zone was considered as an external load on the structure. Influence of minor geological features is eliminated to simulate a construction media. Finite element analysis was performed for the right-hand upper quarter section of tunnel with 762cm internal diameter. The selection of the model geometry and the stress pattern was based on the in situ stress and deformation measurements (Tosun, 1991).

The tunnels have now been completed, but are not in operation because of deficiencies in the construction of irrigation facilities downstream. In this study, the tunnels are reanalyzed using FEM models considering actual data, with the results compared with those obtained from observation and measurements during excavation of rock masses and installation of the temporary support system.

Detailed geological surveys were performed by State Hydraulic Works (DSI, 1977) along the alignment of the Sanliurfa tunnels. Approximately 85% of its total length excavated was within the marl formation. Along the tunnel alignment, the bedrock possesses rather uniform and/or relatively homogeneous lithological characteristics. Thus, a special emphasis was given to the types and characteristics of the discontinuities encountered within the bedrock.

Numerous faults and shear zones intersect the tunnel alignment. The faults generally dip 40 to 90 degrees and their displacement range is between 6 to 80cm for the 1200 section considered in the study of Tosun (1992). The width of the fault or shear zones is rather narrow and infrequently intersect the tunnel at low angles. The joint surveys conducted between stations 11+200 and 15+000 indicate that the dominant set strikes Northeast and dips at angles greater than 40 degrees. Generally one or two major sets plus random are encountered within the bedrock. Spacing of the joints is highly variable. Their apertures are narrow to tight with smooth, planer, and rarely polished and/or slickensided surfaces. Infilling materials are generally calcite and clay. Iron oxide staining of joint surfaces is common.

Various laboratory and in-situ tests were conducted to determine the mechanical behaviour of the bedrock. The plate loading tests conducted within the adits GT2 and YT1 have yielded the modulus of deformation values ranging between 570 MPa and 1825 MPa within the pressure range of 0 to 3.5 MPa respectively. On the samples obtained from borehole 21, the average values of the Poisson’s ratio, the secant modulus of elasticity, and the uniaxial compressive strength were determined as 0.16, 1500 MPa, and 8.5 MPa respectively.

In the tunnel, three stations were selected to determine the mechanical properties of rocks and two stations to monitor the convergence behaviour of the tunnel. At station 25+500, the plate loading test has yielded an average deformation modulus of 6315MPa within the pressure range of 0 to 3.5MPa, whereas by Rocha dilatometer an average value of 1500MPa was determined within the pressure range of 0 to 5.0MPa. At station 24+500, three deformation moduli tests were conducted. The pressumeter, Goodman jack and plate loading tests have yielded average deformation values of 1312, 1186 and 3958 MPa, respectively.

At station 13+700 plate loading and laboratory rock mechanics tests were conducted. The modulus of deformation ranges between 2520 MPa and 11100 MPa, averaging 6255 MPa within the pressure range of 0 to 3.5 MPa. The compressive strength, dry density and Poisson’s ratio averages 24.0 MPa, 2.01 Mg/m3 and 0.20, respectively. The triaxial test results yielded cohesion values within the range of 0.4 to 1.0 MPa and the angle of internal friction value of 25 degrees.

Field measurements and instrumentation have been performed in the tunnel. The mechanical properties of the rock mass were determined in station 13+700. The rod and wire type extansometers were used to monitor the movement of the rock mass at station 25+550. Single point rod extansometers to measure the vertical movement of rock mass were installed at 2, 4 and 6m away from the crown and to monitor the convergence of tunnel and deflection of the completed support system in three different directions. As a result of these measurements, the extreme deformation was obtained as 2.9cm in the crown of tunnel, as a function of time and partial advance of the tunnel (Tosun,1985).

For the study, four different models were used to provide the Finite Element Analysis of Sanliurfa tunnel. The analyses were performed by Plaxis 3D Tunnel program, which is a finite package that has been developed specifically for the analysis of deformation and stability in tunnel projects (Plaxis, 2004). The models assume different steps of construction sequence. The gravity load is applied after excavation of the tunnel and placement of the supports, as external loading conditions (Desai,1972; Kulhawy,1974 and Schwartz, 1979). The weight of zone is considered as an external load on the structure (Kripakov, 1974 and Smith, 1982). Influence of minor geological features is eliminated to simulate a continuous media. In all models, upper boundary was free to displace vertically and horizontally. The left-hand and lower boundaries were rollered. The vertical boundary was restrained laterally, but was free to move vertically. Lower boundary was restrained from moving vertically, yet allowed to displace horizontally. All models considered in this study have different loading and excavation sequences. Their limitations and loading conditions are summarised in Table 1.

URFA1 considers single-step construction. It only represents the excavation of the upper quarter of the tunnel and installation of shotcrete. URFA2 has similar geometrical and excavation conditions with exception of temporary supports and describes two separate stages. Excavation of rock mass and installation of temporary supports are considered as first and second stages, respectively. For the first model only shotcrete is considered as temporary support, while shotcrete and systematic rock bolts are used for URFA2. URFA3 has the same loading and excavation sequences as URFA2, but it also includes the excavation of the invert section as the third stage. The first three models have the same geometric configuration and material properties.

URFA4 is modelled to investigate stress and deformation distribution when considering double tube tunnels described as an actual case. Therefore, full sections of tunnels are taken into account in the model. For each tunnel, two stages are defined to obtain exact solutions. The first stage is excavation of rock masses excluding the invert section and the second stage is installation of temporary support including only shotcrete.

All models represent the external rock stress consisting of vertical and horizontal components. In the models, external rock stress is entirely resisted by the temporary supports such as shotcrete and rock bolts. The models were restrained by the shotcrete lining (15cm thick) from inside of the tunnel. This lining was represented by members, which lie through the center of the structure. The rock bolts are represented by the node-to-node elements 3m long with 232m of spacing. Each rock bolt for a section is pre-stressed with a value of 100kN/m.

As discussed in the previous section, the excavated material has a wide range in elastic constants. For this study the worst ground condition was taken into account. Therefore, the minimum values of modulus of elasticity and Poisson’s ratio were selected as 53105 kN/m2 and 0.2, respectively for all analyses. The shear strength parameters were considered as based on the Geomechanical Classification and laboratory tests (c= 400kN/m2 and Ø = 25º). It is assumed that the excavated material is fully impermeable. All calculations are performed for neutral conditions.

The first three models were used to provide the finite element analysis which will be compared with other methods subjected to the arching theory and the principles belonging to the rock-support interaction. They represent the external rock stress consisting of vertical and horizontal components. Lateral rock stress is determined by the plane strain relationship. For the Poisson’s ratio of 0.20, the lateral stress coefficient is calculated as 0.25. The last model is used to analyse the influence of the second tunnel during excavation. Figure 2 gives the finite element model with three different materials for URFA3

All models were restrained by the shotcrete lining from inside the tunnel. This lining was represented by members, which lie through the center of the structure. URFA2 also includes systematic rock bolts, while URFA1 has only the lining as temporary supports. URFA3 also has excavation of the invert section as an addition to the second model. Thrust and bending moment values acting on each member were illustrated in figure 5 for the model of URFA2. The maximum values of bending moment were determined as 2.14 and 8.87 kNm/m for the models of URFA1 and URFA3. The distribution of bending moment is not simple for URFA3, while URFA1 reflects just the behaviour of a ring element. The maximum thrust values for each section and their distribution are significantly different when compared with two models. As a result of this study, URFA3 provides safer conditions for the tunnels, when considering the full section of tunnel.

URFA4 is used to examine the influence of construction sequence on the original stress distribution, when two double tubes are considered. As a result of analysis, it was found that there is no main difference on the stresses acting on the orthogonal directions for each tunnel (Figure 6). In other words, the excavation of rock in the second tunnel has no influence on the stability of the first tunnel.

Different models were considered to investigate the stability of Sanliurfa tunnels under external loading conditions. In other words, the behaviour of temporary supports consisting of shotcrete and rock bolts, as different combinations, was investigated under only rock loads. From this study, the following conclusions have been derived:

• The finite element analysis can effectively be used to determine the influence of construction procedure on the support loads.

• The calculated displacements obtained from the FEM models are less than those of the measured ones.

• For the weak ground conditions, the temporary support system composed of shotcrete and systematic rock bolts are safe to provide the stability of the tunnel.

• The stability of the first excavated tunnel was not influenced by the second tunnel excavated later.