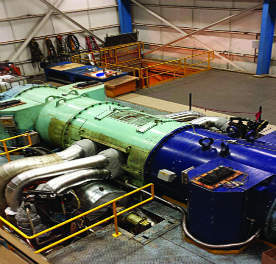 Overhauling a steam turbine as part of a planned maintenance schedule is a regular task for industrial enterprises that depend on them for power generation, but for one pulp manufacturing plant in eastern Canada, the refurbishment of its 25 MW Stal Laval radial steam turbine presented a special problem, in addition to its being a radial design – namely a vibration issue that would need expert attention to resolve it. It would be the first time such a repair had been completed in North America. In the event it was successfully completed by Sulzer.

Industrial processes that have high power consumption often use on-site power generation, but this entails also providing the necessary levels of maintenance support to keep the turbine operational. In many cases, this will be provided by a specialist service engineering company that has the necessary facilities and expertise.

The great majority of steam turbines sold are of the axial flow design, and the more so in North America. When radial flow units need to be repaired, they are usually shipped to Europe, where workshops are more accustomed to this design. However, this increases the total repair time, a crucial factor.

Manufactured in the 1970s, the 25 MW Stal Laval radial turbine uses steam that enters along the machine centre-line and expands outwards through two contra-rotating rotors until it reaches the exhaust pipework on the periphery of the turbine. The two rotors, left hand (LH) and right hand (RH) are made up of nine and eight stages respectively and are each coupled to a generator.

Radial turbines are also used in marine applications owing to their relatively compact dimensions compared to an axial turbine of a similar power rating. But their design limits their maximum output to approximately 30 MW, making them more suitable for small industrial generating sets rather than power generation for the grid.

Initially, the plant owner engaged Sulzer to help in investigating vibration in the steam turbine. Inspection showed that the RH rotor had helical linear cracks on all the steam inlets, both rotors had excessive steam seal clearances and both of the rotor couplings would need to be replaced. Due to the design of the turbine, the only way to repair the steam inlets would be to completely remanufacture the right-hand stub shaft.

As the depth and complexity of the repair became apparent, it was clear that the project would require some of the facilities available at Sulzer’s Edmonton service centre, which has much experience in reverse engineering complex components. With the aim of delivering a more reliable and efficient turbine, Sulzer instigated a metallurgical root cause failure analysis of the damaged shaft to determine if there were any design modifications that could be implemented before remanufacturing began.

The Edmonton centre specialises in the refurbishment and delivery of performance upgrades for large compressors and turbines. Designing and creating replacement parts through reverse engineering makes it possible to deliver improved reliability and extended service life for a wide range of plant assets.

The initial investigation showed that the material used to create the RH stub shaft could be replaced with ASTM A470 class 7 forging, which is commonly used in the turbine industry. The class 7 material has a higher nickel and chromium content, giving it a higher yield strength and better resistance to heat and corrosion than the original.

The new stub shaft was designed, machined, tested and inspected before it was ready for final assembly. In the meantime, the rotors were also refurbished with special attention paid to the steam seals which provide a uniform pressure drop between each turbine stage. The original seals featured an outdated design that was machined out and modified to accommodate the common ‘J-Strip’ seal, which was installed and gave a tighter clearance between each stage of 0.010 inch.

Finally, the repair team turned its attention to the creation of two new rotor couplings, which connect the turbine rotors to the generators. The couplings are installed using a set of eight high tensile, tapered pins and a series of large, threaded sleeves that together ensure a uniform torque transfer.

The rotor couplings also act as a journal bearing, supporting the overhung rotor, and therefore had to be machined to a very tight tolerance with a high quality surface finish to ensure the perfect fit. The centre is equipped with machining technology that can make such high precision couplings.

With machining completed, the left and right hand rotors were reassembled, checked for run-out and then low speed balanced. This last operation required the completed rotors to be shipped to Sulzer’s Houston service centre, where the company has its own at-speed balancing facility.

This process uses vibration diagnostics to analyse the radial vibration at the bearings and allows achievement of the optimum balance at operating speed, as well as minimising the deflection and vibration amplitudes during ramp up and coast down.

The rotors were then returned to duty at the pulp manufacturing plant, for assembly and commissioning of the turbine.