Power list: who will infuence the hydropower sector in 2014?

Who will be helping to shape the hydropower industry in 2014? The editorial team at IWP&DC reveals a list of the people we think will have major influence on the market this year. 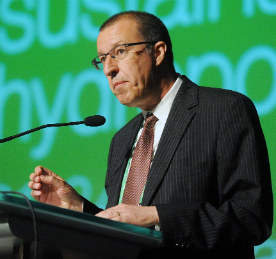 2014 looks set to be a year of both challenges and opportunities for the hydropower sector.

An increasing number of developers and investors are entering the sector, with many extending their activities worldwide, and major new projects ­ both large and small ­ entering the final stages of development. Major banks are starting to invest in the sector again, with the World Bank’s recent approval of a loan to the Inga 3 project in the Democratic Republic of Congo seen as a key indicator that hydropower is back on the investment agenda. An influx of foreign investment in developing countries also means that hydropower could see a presence in regions where it has not been possible to develop projects previously. Private investment too is on the increase, particularly for small and micro hydro projects.

Some of key challenges facing the industry however, as identified by the International Hydropower Association, include incorporating
sustainability into business practice, identifying the relationships between hydropower and climate change, addressing the social aspects of hydropower development, integration with other renewables and improved transboundary collaboration.

The industry is starting to address these challenges ­ and exploit the opportunities ­ with the aid of influential trade organisations and key individuals within the sector. Below we have identified some of those individuals who are likely to make a big impact in the industry this year, and help ensure that the hydropower industry continues to grow and develop.

Current president of the International Hydropower Association (IHA), Ken Adams is the Senior Vice President, Power Supply at Manitoba Hydro. He graduated as a Civil Engineer from the University of London in the U.K., and after working for several years in the U.K. and New Zealand, moved to Canada where he has spent over 40 years in the electricity industry.

At Manitoba Hydro he is responsible for all aspects of the planning, construction, operations and marketing of a hydro system of over 5000 MW and its associated HVdc transmission system.

Adams is an active participant in the Canadian Electricity Association and the Canadian Hydropower Association. He has served on the Conference Board of Canada’s Environmental Management Council, various committees of the former Northern American Electricity Reliability Council and the relevant regional organisations. He is currently Chair of both the Wuskwatim Power Limited Partnership and the Keeyask Hydropower Limited Partnership, cooperative hydro developments between Manitoba Hydro and various local First Nations (Indigenous peoples) and a Director of Teshmont Consultants, a consulting engineering company specialising in high voltage transmission. He also spent several years on the Faculty of Engineering, University of Manitoba.

Lin Chuxue is Vice President of the International Hydropower Association (IHA) and Executive Vice President of China Three Gorges Corporation (CTG), which owns and operates the Three Gorges Water Complex, the largest dam project in the world. The corporation is also in charge of developing new cascades hydropower plants in the upper reaches of Yangtze River with about 40000MW power generation capacity.

Devernay is included on the list for his role at the World Bank. With extensive experience spanning 35 years in the hydropower industry, Devernay believes sustainable hydropower is critical to meeting the challenges of the developing world.

"In an interview in the April issue of IWP&DC, Devernay explains that hydropower is now firmly back on the investment agenda for the World Bank."

In an interview in the April issue of IWP&DC, Devernay explains that hydropower is now firmly back on the investment agenda for the World Bank. He says that hydropower development comes with a complex set of economic, environmental, and social opportunities and risks. Assessing them with care is of the utmost importance to the Bank and he believes that the bank can help developing countries manage the risks while generating long-term development benefits to meet development aspirations of millions of poor people in the developing world.

Before joining the World Bank, Devernay worked for 33 years for Electricité de France (EDF). His last position was Deputy Managing Director of EDF¹s Hydro Engineering Centre (CIH). His responsibilities included strategic leadership of the research and development activities of CIH and the high level management of EDF’s international hydropower engineering business, both as a consulting firm and as an investor.

He has been a member of the Board and Vice-President of the International Hydropower Association from 1999 until 2012.
In December 2008, he was selected by the Intergovernmental Panel on Climate Change (IPCC) as a Lead Author of the Special Report on Renewable Energy Sources and Climate Change Mitigation (SRREN, published in May 2011), both for the Hydropower section and for the Summary for Policy Makers.

Deborah Linke has been included for her role as Executive Director of the Hydro Research Foundation, an organisation that facilitates research and promotes educational opportunities that communicate the value of hydropower. The HRF is influencing today’s market through its many initiatives, including the Advanced Hydro Turbine Project, an accelerated research and development program to create a new generation of fish-friendly hydro turbines that would minimize environmental impacts to aquatic life in our rivers and, at the same time, provide a more economical energy supply for consumers by increasing plant efficiency.

Of particular note however is the Hydro Fellowship Program, an initiative led by the HRF that is designed to stimulate new student research and academic interest in research and careers in conventional or pumped storage hydropower. The program is seen as key to helping encourage the new young generation of engineers.

Dr. Roland Münch: Chairman of the Management Board of Voith Hydro

After studying electrical engineering at The Fridericiana University in Karlsruhe, Dr. Roland Münch worked as a scientific assistant at the Institute for General Electric Engineering and High-Voltage Technology at RWTH Technical University Aachen, where he also obtained his doctorate in 1990.

In 1991 Dr. Münch joined the ABB Group as a design engineer. After various senior positions he was appointed as President of ABB Calor Emag Schaltanlagen AG, Mannheim in 1998. In 1999 he went to ABB Malaysia as CEO and Country Manager.

In 2002 Dr. Münch joined the Voith Paper Management Board, assuming responsibility for the paper technology activities of Jagenberg AG, following the company’s acquisition by Voith. In October 2002 he took over as Head of the Business Division Voith Paper Automation. In 2006 he was appointed to the Management Board of Voith GmbH and he has been in charge of the Group Division Voith Hydro since 2008.

Dr. Roland Münch is a Member of the Board of the Hydro Equipment Association. He is included on the list for his company’s involvement in major hydropower projects, and equipment developments that have helped shape the face of hydropower.

Adama Nombre is a Burkinabè civil engineer and is included in the list for his role as current President of the International Committee on Large Dams.

Nombre is a graduate of electrical engineering from the Université de Franche Comté Belfort and of hydraulic engineering from the Ecole Inter Etats des Ingénieurs de l’Equipement Rural located in Ouagadougou, Burkina Faso. He worked as an engineer in the Government Water Resources sector for 20 years and since 2001 have been the director of a consulting firm in dams and hydraulics engineering (IFEC) based in Burkina Faso. He was elected as ICOLD president during the Kyoto Congress in 2012.

ICOLD is a non-governmental international organization which provides a forum for the exchange of knowledge and experience in dam engineering. The organization is assisting nations to prepare to meet the challenges of the 21st century in the development and management of the world’s water and hydropower resources.

The US President has been included for his FY2015 budget proposal, and the fact that it recognises the crucial role that expanding hydropower will play in the country’s diverse energy future.

As the National Hydropower Association in the US recognised, the $62.5M allocated to the Department of Energy’s Water Power Program builds upon years of investment to develop more efficient and environmentally-friendly turbines, reduce costs of small hydropower and new marine and hydrokinetic technologies, and promote hydropower’s role in the integration of variable energy resources.

Prior to working with HEA, Christine van Oldeneel has worked as a legal counsel to a number of industrial companies from various sectors (non-ferrous metals, cement, edible oil extraction and fibre-cement).

Within Holcim Ltd., the world’s largest cement producer, she oversaw legal matters of the Belgian subsidiary and was also responsible for regulatory affairs and corporate governance. Later on, as Vice-President Environmental affairs she worked out and implemented environmental strategies and coordinated lobbying activities in this field.

Other important achievements include the negotiation and implementation of indemnification schemes related to environmental and severe health problems.

Fluent in French, English, Dutch and German, Christine van Oldeneel’s professional experience and her keen interest for industrial technologies and environmental issues, led her to take on the position as Managing Director of HEA.

Christine van Oldeneel leads the policy and lobbying activities of HEA, coordinates the missions of its working groups, and ensures progress in raising awareness of hydropower and its benefits

The new Alstom Renewable Power Sector has sales of around €2 billion (2010/11) and 10,000 employees. It covers Hydro, Wind and other renewable sources of energy.

Pécresse joined Alstom from Imerys, where he held several positions during his 12 years there, starting with Vice-President Strategy and Development in 1998, then Director Finance and Strategy (2003-2006) , Director of the Ceramics, Refractories, Abrasives and Filtration Division (2006-2008), before being appointed Deputy Chief Executive Officer of Imerys in 2008.

Prior to this he was with Crédit Suisse First Boston from 1992, firstly as associate, then Vice-President, and finally Director responsible for mergers and acquisitions for France.

He is a former student of the Ecole Polytechnique and an engineer from Ponts & Chaussées.

More than 25% of the world’s hydropower plants are equipped by Alstom, and Pécresse plays a key role in the company.Recent contracts wins for the company include the supply of equipment to the Dong Nai 5 hydropower project in Vietnam and the 2400MW Ituango hydro plant in Colombia. The company also recently unveiled the new headquarters of its global technology and hydropower centre in Grenoble, a centre of expertise which carries out all hydropower research and development for the company.

Wolfgang Semper is responsible for the Hydro business area (except the pumps divison) and Group-wide for Automation for Andritz.

He joined the company in 2006 when Andritz acquired VA Tech Hydro and was appointed as member of Andriz’s Executive Board in 2011.

He is member of the Management Board of Andritz Hydro GmbH and Senior Vice President of the Large Hydro division of the Hydro business area, management functions at VA Tech Voest MCE and Voest-Alpine MCE, engineer at Voest-Alpine AG.

Andritz Hydro is involved in major hydro projects throughout the world. Recently, the company announced is to supply four 209MW Kaplan turbines and four synchronous generators for the new Muskrat Falls hydropower plant in Labrador, Canada.

Do you think there are other people who should be included? We welcome your feedback. Please email the editor with your comments to carrieannstocks@globaltrademedia.com or join the conversation in our LinkedIn group.