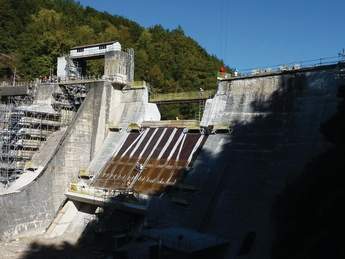 A variation of traditional labyrinth weirs, the relatively recent development of Piano Key Weir (PK Weir) spillways has resulted in the first of a new generation of the new, serrated free-flow structures being installed on both existing dams and in new hydraulic structures. The development potential of the hydraulically complex, but simple, structures continues to grow for project applications and research. The main areas where they are being used so far are France and Vietnam.

Seen less as a revolutionary breakthrough in weirs and more as an evolution – albeit a major one – the PK Weir is physically a self-balanced structure that can be either built from precast concrete or prefabricated steel and has no mechanical components.

Geometrically, a PK Weir is configured as overhanging spilling channels alternating with receiving chutes. Each has its own leading and trailing weir edges. But the majority of the water spills over the sides of the channels onto the counter-sloping slabs of the chutes to be discharged down the spillway.

In plan view, this high-low configuration is seen by some as being like an arrangement of black and white piano keys running atop the crest of a spillway chute on a dam.

PK Weir spillways are often used alone on a dam or barrage but can also be designed to work in conjunction with existing spillway provision, such as stepped structures. They can also be installed on top of existing concrete dams after some modification works.

The first PK Weir was installed at Electricite de France’s (edf) Goulours dam in 2006. The utility has since installed a further PK Weir at its Saint-Marc dam and further projects include installations at the L’Etroit, Malarce, Gloriettes, La Raviege and Campauliel dams.

A labyrinth weir is a non-linear, or folded, structure used at the top of a spillway as an effective way to increase the crest length without having to increase the top width of the chute or dam. It allows for relatively higher discharges for a unit width of spillway, and does so by using various ‘folding’ geometries – triangles, trapeziums or rectangles – to stretch-out the weir’s contact length with water.

Such weirs, therefore, can be suited to new sites that pose restrictions on the size of the impounding structure or spillway but the hydrology requires a sizeable discharge capacity. They also can be helpful at some existing dams that need upgraded to meet larger design floods, especially as their folded form provides for an increase in specific flow rate at constant head. The higher design floods may result from combinations of improved hydrological data, calculation methods and calls for improved margins of safety.

In plan view, a labyrinth weir appears like a jagged or square wave across the top of a spillway chute. But while the configuration has a longer length to spill more water per unit head, it generates complicated flow patterns that partly offset the improved efficiency. The degree of impact is dependent on geometry between chutes, the depth of water over the weir and also, in the direction of flow, any downstream slope there may be across the top of the structure.

Additionally, as head increases the relative performance in efficiency falls off due to geometrical restrictions for the approaching flow and, eventually, it nears what can be expected of a conventional straight crest weir.

However, despite the benefits afforded by labyrinth weirs a major restriction for their use is that their vertical reinforced concrete walls, interlocking in the trapezoidal plan shape, need to be built on a flat base. Therefore, in addition to construction economics limiting their use, as specific flow increases above approximately 20m3/sec per metre, their application is limited because more foundation area is needed than is usually available at the narrow spillway crests of standard concrete gravity dams.

With flood design calculations giving higher estimates of capacities needed, these restrictions were a problem for existing concrete dams. To help overcome these limitations, a new concept emerged that was both simple and requires little maintenance but, of particular value, it can be used on existing concrete dams. It was tested in Europe, Asia and north Africa, and has become known as the PK Weir.

The concept for the PK Weir was presented almost a decade ago by Lemperiere and Ouamane, discussing two points: the problem of free-flow spillways having low specific flows and the resulting loss of live reservoir storage compared with gated spillways; and, the specific flow benefit of labyrinth weirs but their restrictive need for extensive flat areas, meaning they cannot be used for most upgrades of concrete gravity dams.

The new design offers, like a labyrinth weir, a system of improved specific flows compared to a standard weir. However, it beats a labyrinth weir by offering a smaller footprint and greater efficiency.

A pattern of alternating channels and chutes pointing upstream and downstream, respectively, became the established configuration from the research. Specific flows that can be passed by a PK Weir can range from 3m3 per m to 100m3 per m, say designers. The new weir design can pass at least four times the specific discharge of a classic (Creager) weir for a relatively low overflow depth.

Two main types of PK Weir were identified, those with: 1) chutes overhanging on both the upstream and downstream sides; 2) a chute overhanging only on the upstream side, and by longer distance. The former can be used for specific flows of up to 20m3/sec per metre, and the latter is considered of particular interest for large dams.

In comparison to the labyrinth weirs, the PK Weir is able to have a smaller footprint on a dam body as both the channels and intervening chutes overhang the structure. They have counter-sloping slabs that cantilever upstream and downstream of the crest, which results in a generally self-balancing structure. However, anchors are usually added. The slabs have 2:1 slopes.

To achieve a level base for a PK Weir on an existing concrete gravity dam, however, requires some demolition at the tip of the rounded weir crest. In section, the length of the new base across the modified dam crest needs to be between 1.5-2.0 that of the maximum height of a thin wall forming the boundary of a typical channel/chute.

A typical PK Weir can have the total length of the circuitous channel walls being about six times that of the spillway width that houses the device. The relationship of total wall length-to-spillway width is known as the N ratio. Also typically, the spilling channels are wider than the receiving chutes. The maximum depth of the channels is about a quarter of their length.

Tests show that floating debris can be a hindrance to discharge rates as with any type of spillway. However, reduction in the specific outflow is about 15% but lessens as discharge rates rise further. As with many hydraulic structures the use of a floating boom has helped minimise the interference.

Other loading that may need to be considered includes ice pressure on the myriad walls in their snaking alignment. The structure, if constructed of reinforced concrete and not a steel fabrication, may need extra rebars in such instances.

A further benefit is that the PK Weir should be able to be constructed of local resources and does not require to be an imported hydraulic structure.

In 2003, shortly after the PK Weir concept was generally made known, EdF rapidly decided to test the concept at Goulours dam in the first of what was believed could become a series of upgrade projects.

The PK Weir concept was attractive for a variety of reasons, explains EdF engineer Frederic Laugier, such as being able to increase discharge capacity by providing high specific flow rates, the ability to install them on existing concrete dams, and that relatively little maintenance would be needed. Further, the PK Weirs would also help to raise the level, and therefore storage volume, in a reservoir.

Less than four years ago, EdF completed its first PK Weir installation, at Goulours dam in south west France. The project started in 2003 and saw the basic concept tested for passing floating debris and also adapted to the site needs in terms of geology, dam curvature and constraints such as ice load, seismic load and concrete durability.

The Goulours dam was constructed in the early 1940s and is a 21m high concrete, single curvature arch gravity structure with a crest length of 71m. Originally, the dam had only a central 4m by 4m gate on a standard weir crest and a spillway down the face of the structure. Laboratory tests with a 1/20 scale model showed the discharge capacity to be 92m3/sec with a 1m nappe depth. However, the challenge facing EdF was that the updated design flood is 162m3/sec.

Options considered included changes to the operating level of the reservoir, construction of another spillway – either gated, standard or labyrinth – or installation of fuse gates, an a PK Weir. The latter was selected for its minimum impact and cost, and reliability. And, to ensure the ongoing reliability of the existing gate, it is always to be operated to spill first and the PK Weir – installed on the right bank – would only be required for major floods exceeding the 25-year return period.

The PK Weir was inserted in a 12m long section of the dam though, due to typography, it is not strictly on the crest. It has two channels and three chutes – the five conduits (alveoli) were the optimum arrangement to minimise construction costs associated with achieving the same total length of walls as seven and nine conduits. The built walls are 3m high and 200mm thick, and the sloping slab thicknesses are 200mm-350mm. The weir follows the dam curvature.

The construction schedule was achieved for the weir to be successfully tested at the end of 2006. The total project costs was Euro 350,000.

The development and operational success at Goulours gave the greenlight to further PK Weir installations in EdF’s portfolio where rehabilitation is needed due to insufficient discharge capacity.

EdF’s second PK Weir project was Saint-Marc dam, a late 1920s structure near Limoges. The dam is a 40m-high concrete gravity structure with two gates spillways, which have a combined capacity ranging from 566m3/sec-623m3/sec, according to EdF estimates. The new design flood (1000 year) is 750m3/sec.

The PK Weir is located between the existing gates and was completed in mid-2008 at a cost of Euro1.7M. It has been designed to become operational after flows from the gates reach a total of 380m3/sec, which equates to the 50-year return period event. The PK Weir discharges – via its own unconventional “gutter ski-jump” half-length spillway – into the main dissipation basin.

Another of EdF’s PK Weir projects is the L’Etroit dam, a 25m high concrete gravity dam located upstream of Saint-Marc on the Taurion river. It was built in the early 1930s with two gated spillways on the right bank with a total discharge capacity of 456m3/sec.

The latest hydrological studies have estimated the design flood to be approximately 570m3/sec. However, only an additional flood discharge capacity of 75m3/sec is needed because of the attenuation benefit of another dam upstream – the Roche-Talamie.

Among the already recognised benefits EdF saw in the PK Weir solution, the utility also placed great emphasis on reliability and operational safety of the system due to the remoteness of the site and potential access difficulties.

However, this project took PK Weir design in a further development step with the introduction of a raised wall. The resulting capacity of the PK Weir at maximum operation level is 100m3/sec – which is a third more than would otherwise be available, though that would meet the required additional discharge capacity at the dam.