SMR licence applications are delayed, the Yucca Mountain safety evaluation is not, there should be new rulemaking for reactors under decommissioning, and her battle to de-acronymize the Nuclear Regulatory Commission: NRC chairman Allison Macfarlane spoke and answered questions in a wide-ranging q&a session organized by the American Nuclear Society on 11 September. 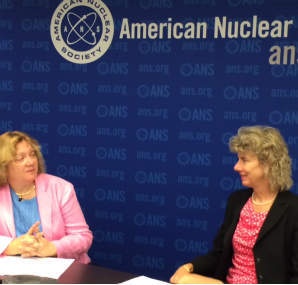 SMR licence applications are delayed, the Yucca Mountain safety evaluation is not, there should be new rulemaking for reactors under decommissioning, and her battle to de-acronymize the Nuclear Regulatory Commission: NRC chairman Allison Macfarlane spoke and answered questions in a wide-ranging q&a session organized by the American Nuclear Society on 11 September.

Macfarlane has been lead commissioner since Gregory Jaczko quit amid controversy in May 2012. "Righting the ship was my most immediate challenge. I am proud of my relationship with fellow commissioners and staff. We are all in a good place now, and we are getting ready to have two more commissioners; there was a hearing on Tuesday with the two nominees. I of course think that the commission operates best with its full complement of five." (This week the appointments of Jeff Baran and Stephen Burns were confirmed; they now need to be sworn in).

"I am trying to de-acronymize the agency; that is an uphill battle."

Macfarlane said that the blogger conference was one of her initiatives to emphasize public engagement. "When I started reading NRC reports, there were so many acronyms. I am trying to de-acronymize the agency; that is an uphill battle. You have to say what you are talking about because we don’t all understand what these acronyms are, except perhaps the NRC. I am trying to emphasize plain language. What I always say is, imagine the grandmother living near the nuclear plant, can she understand all of this?"

She said that one of the agency’s current priorities is considering its future. "10 years ago people imagined a different future, a nuclear renaissance, but that has not come about in the way that was expected…NRC built up staff for a future that didn’t materialize, that the industry was telling us about. We didn’t expect what happened, so now we need to take stock and imagine the different scenarios that we face over the next five years or so, and the appropriate resources and skills."

For example, when asked about the status of SMR licencing applications, Macfarlane said that she has been surprised that there haven’t been any so far. "We were told that the industry would be submitting applications this year, but then a few months ago we were told that they would not. Now we expect the first by 2016, but that is subject to change as well, so we will see. We are prepared to evaluate SMRs, the LWR variety at least."

The NRC’s New Reactor Licensing Application schedule list dated 15 August now lists applications for B&W mPower and Holtec design certifications, and TVA/Clinch River (mPower) construction permit, and Holtec combined construction and operating licence, as ‘application submittal date to be determined by applicant.’ NuScale Power’s application is due to be received in mid-2016, and its review is scheduled to be completed at the end of 2019. The US appetite for SMRs appears to have dwindled after lack of market support; B&W mPower reported it was scaling down its efforts after failing to find an investor earlier this year.

Macfarlane confirmed that the Yucca Mountain safety evaluation report is on track to be completed by January 2015. (Its potential to actually be built seems ever more distant, following the waste confidence ruling, even though the US government is now legally liable to pay storage costs in absence of a federal repository). Following a judicial challenge, the NRC was required to reexamine the basis of storing fuel on-site over the long term. Its work, completed only a few weeks ago, affirms the safety of spent fuel to be stored on site indefinitely, among other possibilities. In the meeting, Macfarlane confirmed that there are no other plans to examine the length of fuel storage, and also said that it is up to Congress, not the NRC, to set the country’s nuclear waste policy. She had criticised the NRC’s NUREG-2157 report because it did not force the agency to face the issue of building a repository, "inadvertently enabling the continued postponement of efforts to secure a geologic disposal option."

"Right now, reactors under decommissioning are regulated under operating nuclear power plant rules, but that this does not make a lot of sense."

She said that she thought the idea to initiate rulemaking on decommissioned reactors would be a good idea. "Right now, reactors under decommissioning are regulated under operating nuclear power plant rules, but that this does not make a lot of sense. Once they defuel the core they don’t need security guards standing around. We need to adjust this. The NRC started going down this road in the early 2000s, during the nuclear renaissance, but it was put aside as a low priority at the time. Now that there four, soon to be five reactors decommissioned recently, things have changed. I think we need to get that done. Rulemakings take a long time, but having to go through the exemption process [for decommissioned reactors with the current rules] doesn’t serve us or the public. The reactors she was referring to are Crystal River, Kewaunee, San Onofre nuclear generating station 2&3 and Vermont Yankee (due to close at the end of the year).

She said that the build-own-operate model, in which a vendor takes a stake in operating a reactor, is ‘interesting’, but added that it is important that any country deciding to enter a nuclear energy programme has an independent regulator, backed by government, that is well-resourced with staff who have the right skill sets. "When I interact with international partners that’s what I spent a lot of time talking about." She dodged another question about whether she thought that there were some countries that should not develop nuclear power, declining to answer on grounds that doing so would be inappropriate.