On 23 March TenneT and Energinet signed an agreement for the development of a large renewable European electricity system centred on a huge artificial island in the North Sea. Leonard Sanford 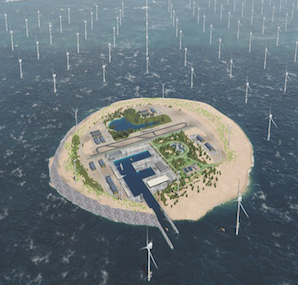 The TSOs for The Netherlands, Denmark and northern Germany (TenneT BV, Energinet.dk and TenneT GmbH) have signed a trilateral agreement for the development of a large renewable European electricity system in the North Sea. This so-called ‘North Sea Wind Power Hub’ has the potential to supply 70 to 100 million Europeans with renewable energy by 2050.

This important step towards a broad consortium was given EU blessing by the presence of the European Commissioner for the Energy Union, Maroš Šefc?ovic?. What TenneT and Energinet signed was an agreement to jointly investigate the feasibility of one or more ‘Power Link Islands’, and to press ahead on developing a large renewable electricity transmission system in the North Sea located at a site roughly equidistant from Denmark, The Netherlands, and the UK. TenneT first unveiled its vision of the hub in June last year.

The concept is nothing less than the creation of a huge artificial island, probably on the Dogger Bank in the North Sea, complete with a harbour, airstrip and homes, to serve as a connection point for thousands of future offshore wind turbines and possibly provide the space for a vast array of solar panels. Such a power centre at a location with shallow waters and optimal wind conditions could make a crucial contribution to the aim of a European energy transition that is both feasible and affordable for European consumers, and would be an important next step towards meeting the 2050 climate goals formulated in the Paris Agreement, COP21.

Discussions are proceeding with other potential partners. TenneT CEO Mel Kroon commented: “This co-operation with Energinet is an invitation to TSOs from North Sea countries as well as other infrastructure companies to join the initiative. The ultimate goal is to build a solid coalition of companies that will make the European energy transition feasible and affordable.”

“Building one or more artificial islands in the middle of the North Sea sounds like a science fiction project, but it could actually be a very efficient and affordable way for the North Sea countries to meet the future demand for more renewable electricity,” said Torben Glar Nielsen, CTO of Energinet.

TenneT and Energinet together with other parties that want to join the project will spend the next few years in investigating the details and potential of one or more power link islands. If the TSOs decide to go ahead with the project, such an island could be developed by around 2035.

A North Sea wind power hub at a location like Dogger Bank has many advantages. It offers shallow waters and optimal wind conditions for offshore wind farms, and has great potential for large-scale wind energy generation: a total capacity of possibly 70 to 100 GW could be connected via one or more such islands, which could also allow the creation of near-shore connections and reduce costs at offshore locations.

An artificial island offers other advantages – staff, components and assembly workshops can be housed there, optimising and simplifying complex offshore logistics, and it provides the necessary land area to reduce costs through economies of scale.

The generated wind energy can be distributed and transmitted via direct-current connections to all countries bordering the North Sea – the Netherlands, Denmark, Germany, the United Kingdom, Norway and Belgium – while the transmission system could simultaneously function as an interconnection among their energy markets, enabling the transfer of renewables generation and the balancing and trading of electricity generally.

The partners, led by TenneT, will enter into talks with the EU and the Member States to see whether the required European co- operation can be set up. Factors that play an important role include legislation, regulation, targets and financing. TenneT will make a start on studying the Netherlands IJmuiden Ver wind zone and port in terms of engineering, interconnection, conversion, shore feed-in and integration with existing infrastructure. And there will be an investigation, with UK stakeholders, of options for connecting IJmuiden Ver to a UK wind energy zone such as East Anglia.

There are some environmental considerations – the impact on marine flora and fauna will need to be taken into account by the co-operating parties. TenneT and Energinet emphasise the necessity to be in close contact with preservation and environmental organisations. Tjerk Wagenaar, director of Dutch environmental NGO Natuur & Milieu commented: “TenneT is a reliable state-owned partner that can help ensure a successful energy transition in the North Sea. They can do this cost-effectively, with a focus on sustainable and ecological values. It is precisely in large-scale projects of this kind that we have to take marine flora and fauna into consideration as much as possible.”

Solar energy and wind energy will be necessary on a large scale because achievement of the European targets for reducing CO2 emissions hinges largely on electricity produced sustainably. Wind and solar energy complement each other: there is more sun from spring to autumn, and more wind in the colder and darker months of the year. So a sustainable and stable energy system for the future will need solar and wind energy, both on a large scale. This requires optimum co-operation because it cannot be accomplished by individual member states on their own. The European political declaration of 6 June 2016 on energy co-operation among the North Sea countries was an important step in this direction.

The vision of the three TSOs provides a basis, or point of departure, for a joint European approach up to 2050 and focuses specifically on developing the North Sea as a source of and a distribution centre for Europe’s energy transition, but TenneT’s vision for building a large European electricity system in the North Sea, based on a ‘hub and spoke’ principle, goes well beyond the requirements of large scale wind generation. The TenneT vision seeks to make CO2 reduction targets feasible and affordable.

TenneT’s thinking is based on an island with a modular structure, with each module covering approximately 6 km2. This is big enough to provide space for connecting roughly 30 GW of offshore wind capacity and a significant area for solar arrays. The island would be expandable by adding one or two modules of 6 km2 each.

TenneT CEO Mel Kroon commented: ‘In Germany and more recently in the Netherlands, TenneT has the role of developer and operator of the offshore grid. The success of the energy transition depends largely on the extent to which we mount a co-ordinated joint effort in Europe. Co-operation among national governments, regulators, the offshore wind industry, national grid administrators and nature and environmental organisations is a precondition for achieving Europe’s environmental targets. But it will be very important for the six European North Sea countries to be willing, in due course, to make their targets independent of national borders, which means agreeing that the electricity generated offshore must not necessarily be transmitted to their own country.”

Far out at sea, but still cheaper

The areas relatively close to the shore, which are the first that must be utilised for offshore wind farms, will provide insufficient possibilities over the long haul to develop the required volumes of offshore wind energy. This makes it necessary to look for possibilities far out at sea. The disadvantage here is that the costs will be significantly higher. The construction and maintenance costs of the wind farms are higher and these must be connected via many relatively expensive, single direct current (DC) connections. Alternating current technology cannot be used for connecting offshore wind farms far out at sea because of an unacceptably high loss of electricity during transmission to the onshore grid. By building an island surrounded by wind farms (at a relatively short distance), wind energy obtained way out at sea will assume the cost benefits of near-shore wind – thanks to the island. The shorter cable runs will allow use of cheaper AC connections. Further cost benefits can be derived from an island, as it offers a permanent site for people and resources – permanent bases for builders of wind farms and infrastructure, storage of components (eg turbines, rotor blades, pylons, HV equipment} a reduction in transport costs, a landing strip, permanent residency opportunities for staff, and joint maintenance and port facilities.

The alternating current generated by the wind farms will be converted to DC on the island for transmission to the mainland of one of the North Sea countries. A great additional advantage is that it is no longer necessary to build converter stations on platforms in the sea, conferring substantial cost savings.

The present utilisation of a given connection between a wind farm and the mainland is around 40%. This is because there is not always wind (or not always equally strong) and the wind turbines also have to undergo maintenance or repairs. The capacity utilisation can and must be greatly increased by giving the direct current connection the role of interconnector. The transmission capacity of the DC connection will then be used not only for the outward movement of wind energy, but also for electricity trading between the connected countries. In effect, the island will act as the central hub for a North Sea network of offshore wind farms and international connections. This will increase the present efficient utilisation of a connection between the wind farm and the mainland from roughly 40% as it is now and take it towards 100%.

Under this view the next logical steps for the Netherlands are completing of the wind energy areas of Borssele, Hollandse Kust (zuid) and Hollandse Kust (noord), already under development. According to planning, all will have entered service in 2023. Then the offshore areas of IJmuiden Ver (5-6 GW) and possibly other wind energy areas already designated will need to be developed.