Major developments below Vesuvius Lake dam in Ohio, US, led to the reclassification of the 70-year old dam to high hazard status. Sue Peterson oversaw the rehabilitation work undertaken to bring the dam up to current standards 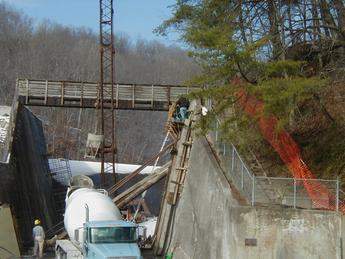 VESUVIUS LAKE dam is a United States Department of Agriculture (USDA) Forest Service-owned earthen dam, located in the Wayne National Forest on the southernmost tip of the state of Ohio. It is about 12.2m in height, 137.2m long, has a 1.2m corrugated metal pipe for a lake drain and a principal concrete ogee weir spillway. The dam is also part of the Lake Vesuvius recreation area of the forest and is crossed by part of the trail system. There is a footbridge across the deep concrete spillway that links the segments of the trail around the length of the lake.

In 1933, Franklin D. Roosevelt became president of the US, and began his New Deal federal programmes to pull the country out of the great depression. The aggressive programmes included the Civilian Conservation Corps (CCC), which hired men to work on federal public works projects in the National Forests and parks. Vesuvius Lake dam was built by the CCC in 1935. When it was built, it was designed to be able to store in the reservoir, or pass through its spillways, the flood resulting from a 100-year storm event.

Much has changed in this part of Ohio since 1935. The dam is located about 16km from the Ohio river and two other states; Kentucky and West Virginia. It is within an hour’s drive of about half a million people. Major development has occurred downstream of the dam, including the construction of houses, a major highway and a public school. These developments led to the reclassification of the dam to a high hazard status, and it was identified in a 1990 State of Ohio Department of Natural Resources report as being severely undersized. It would pass or store approximately 37% of the design storm volume. The concrete spillway has been patched and grouted a few times over the years.

In 1993, an engineering firm was hired to develop alternatives for the rehabilitation of the dam to bring it up to current standards. The selected alternative included providing overtopping protection of the dam by installing roller compacted concrete (RCC) over the whole dam and installing 30cm concrete overlays of the spillway vertical walls and replacement of the floor and sloped walls of the spillway.

The USDA Forest Service hired the US Bureau of Reclamation to carry out the design of the project. This was completed in 2000, with the resultant construction contract being awarded the following year. The value of the contract was US$3.7M for the whole project, and the concrete spillway overlays portion cost US$1.7M. The contract was funded by an appropriation of the US Congress, administered by the USDA Forest Service. The prime contractor was T-C Company, Inc. based in Indianapolis, Indiana, and the subcontractor responsible for cast-in-place concrete was D.L. Braughler Company, Inc. of Morehead, Kentucky. The construction administration was performed by the employees of the USDA Forest Service, with assistance from the US Army Corps of Engineers.

The concrete spillway is 125m long by 7.6–13.7m wide by 8.5m deep and the lake elevation is controlled by an ogee weir. As the concrete was 65 years old, and had been patched and grouted several times, the decision was made to overlay the vertical walls with 30cm of new concrete. The work included the removal and replacement of the floor and the sloped walls downstream of the stilling basin.

Bedrock under the dam and spillway lies approximately 14–15m below the crest and consists of a Pennsylvanian Allegheny formation (sandstone, siltstone and shale and carbonaceous interbeds.) The sandstone has a moderately hard bedding plane and is 3m thick, while the siltstone has soft to moderately hard bedding planes and appears in thin layers. When the soil adjacent to the dam side of the cellular wall was removed, there was very little fracturing of the sandstone and it was suitable for the foundation of the new cellular wall face.

Removal of concrete in chute floor

Floor sections were removed and replaced before the walls’ overlays. The existing concrete in the floor of the spillway was removed along its entire length, with the exception of the stilling basin, which was left in place and overlaid with new concrete like the spillway walls. At the junction of the wall with the floor a 7.6cm saw cut was made. The original plans showed the removal of the chute floor required very little extra excavation. Once excavation of the floor began, the depth to bedrock to anchor the new floor was 0.3–2.1m. The void created by removing the old concrete and the loose material underneath was filled by the new concrete, which resulted in substantial overruns in concrete quantities. All foundation surfaces were pressure washed before the placement of new concrete.

The reinforcement of the new concrete wall overlays and chute floor replacement incorporated grouted anchor bars (#4, #6 and #11), reinforcing bars and plain dowel bars. The new 0.3m wall overlays were anchored to the existing walls by drilling holes in the old concrete and #4 or #6 grouted anchor bars (depending on location in spillway) were installed every 0.9m on centre. The anchor bars were embedded at least 17cm on the right spillway wall and 0.3m into existing concrete and rock on the left wall. Attached to the grouted anchor bars was a combination of bars that formed a grid to reinforce the walls and floor of the spillway. The #6 anchor bars, reinforcing bars and plain dowel bars were installed in this grid pattern, with the opening between bars 0.3m each way. The bars were required to be embedded in a minimum of 5cm of concrete.

Concrete installed in the spillway had to have a minimum compressive strength of 4000psi at 28 days. Portland Cement type II was used in the mix and 5±2.5cm slump was allowed. The maximum free moisture allowed was 6%. Although the contract had specifications allowing on-site batching of concrete, several ready-mix plants were within 30 mins of the project, and were used to produce all the concrete used in the spillway. Placement of concrete on grouted anchor bars required a curing period of three days after anchor installation for slabs and seven days for walls. Each placement of concrete had to cure four days before placing adjacent concrete.

Drain tiles were installed laterally and perpendicularly under the new spillway floor. The drains were 10.2cm perforated PVC drain pipe set in a 0.3m gravel trench surrounded by a sand filter that was 7.6cm thick. They drained into existing 15.2cm drain pipes that were entrenched in the stilling basin vertical wall that was not removed.

The original design did not call for overlaying the ogee weir as part of the rehabilitation project. However, once the work was well underway, it was decided that the original concrete in the weir looked old and worn-out when compared to the new overlays that were being installed adjacent to it. The elevation of the crest of the weir dictated the lake water elevation at normal pool and changing the water level would have an adverse effect on a beach, boat ramp, and trail system that were located at other parts of the lake. So the top 0.3m was removed from the top curve of the ogee weir and replaced in kind. The same techniques were used to attach the new concrete to the old existing concrete.

The original contract time was 300 calendar days. The RCC on the dam was installed in the first 100 days of the contract. The conventional concrete used in the spillway took much longer than originally scheduled. The original timetable showed the concrete work scheduled for three months in the fall, when it actually took almost a year. The concrete production per day was much less than had been projected, and resulted in the contract being extended to 465 days.The specifications required each 76m3 of concrete, or each day’s pour of the concrete to be tested by pouring cylinders and measuring slump, temperature and air content whichever was less. The total cast-in-place concrete that was placed on the project was 1838m3. The tests were taken 116 days for an average of 15.3m3 per day of pour.

Not a single cylinder failed and almost all the cylinders were broken at over 5500psi at 28 days. The contractor’s testing firm originally submitted a quality control plan for cast-in-place concrete which met the intention of the contract. Their costs were estimated at the 76m3 per day and had a significant overrun by the small daily production. All the concrete pours were adequately formed, vibrated and finished, but the contractor was using old steel forms that had to be moved for each section of wall overlay which took extra time and manpower and cut down production rates. The project, although it took longer than anticipated, was very successful and completed professionally by the contractor.