More than a dam – the story behind Ralco

The Ralco dam in Chile is not just a dam, says RCC consultant Ted Warren. It is a true accomplishment of hydro power development in extreme environmental, climatic and challenging cultural conditions. Here he pays tribute to the ingenuity and successful implementation of this banner project 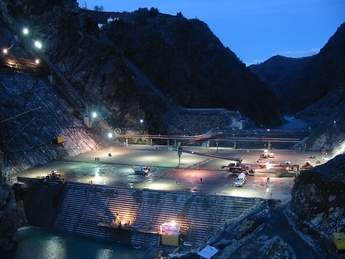 The Ralco dam project was conceived as part of a cascade of hydro power development on the raging Bio Bio river in Central Chile. When completed in October 2003, Ralco was the second tallest RCC dam in the world with only Miel I in Columbia being taller at 188m from the dam foundation to the crest elevation. It should be noted, however, that Ralco was completed in similar conditions to Miel I but at a considerably faster rate of construction and in extreme conditions. These not only included challenging and difficult construction access but other considerations such as local and international environmental opposition; acts of vandalism and sabotage; social, economic and engineering challenges; forest fires; and five flood events with three overtopping the RCC construction works. All were mitigated in an amicable and successful manner in the end to ultimately complete the project and supplement the national grid in Chile.

Ralco dam and hydroelectric project was conceived in the 1990s and built during 2001-3. Project developer Endesa Chile was under the governing authority of Endesa Espana Group, with its designer being Ingendesa SA Chile. The primary contractor for the RCC dam was FEBRAG of Santiago, a joint venture between two of the largest contractors in Chile, Fe Grande and Brotec. ASI RCC Inc (now ASI Constructors) provided technical expertise for the RCC dam portion of the hydro power scheme, while Rotec Industries of the US provided one of the most difficult and steepest RCC conveyor systems ever built.

The many constraints that were overcome during the project were a true accomplishment to all involved. Site access within the natural terrain was far friendlier to a mountain climber or an adventurous whitewater rafter than the engineering and construction equipment needed to build this massive concrete structure. A separate contract was awarded for the excavation works and access roads which included a network of tunnels through the Andes Mountains, mainly on the right abutment side of the project.

A 7km long fiber reinforced, concrete lined power headrace tunnel and intake is located on the left abutment of the project with several access shafts and adits leading to the 690MW powerhouse cavern downstream. Ensuring that the powerhouse works and the dam were completed almost at the same time for efficient commissioning of the project was an additional challenge.

The first overtopping event in 2001 partially destroyed the upstream cofferdam and inundated the previously prepared foundation of the dam. This event proved to be a major setback in the project schedule as well as realisation of the difficulties that the joint venture was facing in the successful construction of the project. The partially destroyed cofferdam was then rebuilt with RCC with an integrated spillway and reinforced training walls designed to withstand the impending and expected flood events that most always occur within a project of this nature.

The project was the fifth fastest RCC dam constructed worldwide at the time of completion, and still remains in the top 10. RCC production was 24hrs per day seven days per week, weather permitting. The RCC was batched using 3x9m3 drum mixers for RCC production. A maximum hourly rate of 550m3 was achieved with a corresponding monthly average of 76,000m3 per month over the 20-month period. This is an amazing achievement considering that over 3000mm of rainfall per year is an average, but during the month of June 2003 approximately 1200mm was experienced in the catchment area. Forest fires of a questionable nature raged in March 2002 further inundating the project with harmful smoke that limited sight and working conditions.

The abutments were steep at 45 degrees making the extremely complex delivery conveyer system the steepest in the world to date.

Ralco dam construction endured nearly every constraint known to man. It was an amazing task and an engineering marvel. Furthermore, when commissioned the scheme was able to generate more hydro power then its original forecast of 570MW. The actual installed capacity is 690MW.

The author would like to acknowledge the following for their respective roles in the successful completion of Ralco:

• All engineers at Endesa and Ingendesa Chile.

• Construction engineers at FEBRAG at the site who dedicated their time relentlessly until project completion.

• Rotec Industries of the US.

• Rolo Malichefsy who implemented the installation of the difficult conveyor system.

• David Bosshart of ASI RCC in the US for providing technical expertise during the implementation stage of RCC construction.