What may turn out to be a key step in the development of bulk energy storage technology was taken in January with the signing of a co-operation agreement between some key players, notably GE and RWE. The agreement envisages development and construction (in Germany) of a large facility employing the concept of adiabatic compressed air energy storage – a world first. 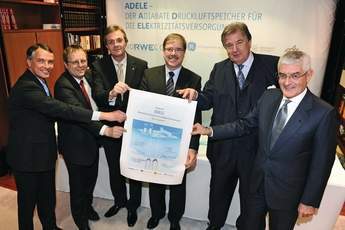 The idea is that air will be compressed during periods when electricity supply exceeds demand. The resulting heat of compression will be buffered in a thermal energy store, and high pressure air piped into underground caverns. When electricity demand subsequently increases, the compressed air is heated using heat recovered from the store and used to generate power in a turbine.

This adiabatic approach, whereby the heat of the compressed air is not lost but remains in the process and can be used for power generation, differentiates the concept from previous compressed air storage plants, notably Huntorf and McIntosh, promising significantly higher levels of efficiency and avoiding the need to burn natural gas (or any other fuel) in the power generation phase to heat the air. It also differs from the scheme envisaged for the long proposed Norton compressed air energy storage plant in the USA, in which the compressed air would be mixed with natural gas and combusted in a gas turbine.

“The massive and deliberate expansion of wind power requires smart solutions to ensure a non-stop continuous electricity supply. By means of the ADELE project, we take the lead to rapidly develop an efficient storage option”, said Dr. Jürgen Großmann, Chief Executive Officer of RWE AG. A well-balanced energy mix where all energy sources contribute their unique strengths will be a guarantor of environmentally friendly, safe and efficient electricity supply, RWE believes, and in this context, innovations such as ADELE will help to optimise the co-existence and smooth interaction of the individual energy sources. “Storing electricity efficiently, safely and in large quantities – this is certainly one of the key challenges of future power supply,” says RWE

The aim of the ADELE project is to install an initial demonstration plant, with operation planned for 2013. It will have a storage capacity of 1 GWh and be capable of generating up to 200 MW, says RWE. “That way ADELE will be able to provide backup capacity within a very short time and replace forty state-of-the-art wind turbines for a period of five hours.”

The German Federal Ministry of Economics is said to be willing to offer state funding, which “underlines the special importance of this project”, according to the ADELE partners, who say they are planning to invest themselves a total of 10 million euro.

“We will support this project through innovative compressors and air turbines,” said Georg Knoth, GE’s CEO & Regional Executive for the German-speaking region.

During the compression process, the temperature of the air will play a decisive role since it rises to more than 600 °C – thus making high demands on the compressor technology.

To implement the project, not only will advanced turbomachinery be required but so will an innovative high-temperature thermal energy storage concept. The realisation of this key component will be supported by Züblin as well as by DLR who will divide the workload between them.

“The development of a powerful heat accumulator featuring a very high internal pressure and an operating temperature of more than 600 degrees Celsius confronts us with completely new challenges with respect to the design of the pressure chamber and the development of suitable storage materials. Such a task can only be solved by a breakthrough innovation because the thermal energy storage will be subject to stresses resulting from the cyclic temperature and pressure loads, which are much higher than usual”, explained Jörn Beckmann, Chief Executive Officer of Züblin.

Prof Dr Johann-Dietrich Wörner, Chairman of the Board of DLR, added: “Within the framework of the ADELE project, we will develop solutions for the conception, design, layout, and dimensioning of storage equipment and high-temperature insulation, which are core components and of decisive importance for the performance and cost efficiency of the overall structure.”

ADELE is in fact the second major project in energy storage that Zublin and DLR have collaborated on, the first being a heat accumulator for solar power plants.

Suitable locations for the type of compressed-air storage power plants envisaged are, in particular, regions with geological salt structures, which can then be used to build underground caverns for the absorption of large quantities of compressed air. In addition, such salt structures should be close to wind turbines, say the ADELE partners. Erdgasspeicher Kalle GmbH, a subsidiary of the RWE group, will contribute its know-how in the planning, installation, and operation of underground storage facilities.

Expertise on refractories will come from Ooms-Ittner-Hof, which, like Züblin, is a member of the Strabag group.