Finding a replacement at Douthat and Hungry Mother dams

Stainless steel knife valves were installed at Douthat and Hungry Mother dams after the existing sluice gates, which were less than 10 years old, began to malfunction 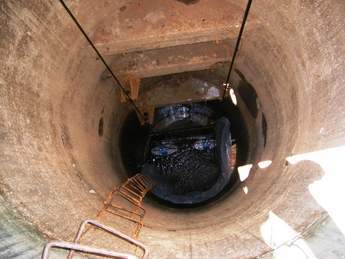 Two state parks in Virginia, US – Douthat and Hungry Mother – both had high hazard earthen dams built in the 1930s. Douthat State Park dam is 16.8m high and 206m long with a masonry spillway. Hungry Mother State Park dam is 13.7m high and 195m long with a concrete spillway. Both have been armoured with roller compacted concrete, then topsoil and grass have been added to provide a more appealing and natural appearance. The dams were very similar in design, with both having 48-inch (121.9cm) square sluice gates mounted side by side in a concrete tower, with a 5’ x 5’ square outfall sluice to conduct the water downstream. The manual operators for the gates were located on top of the structure. It was impossible to operate the gates in compliance with federal and state workplace safety regulations because the structure had no hand rails or fall protection, requirements set forth by the Occupational Safety and Health Administration (OSHA) in the 1970s. A three man crew with personal flotation devices was required to take a boat to the structure and climb a ladder to the top to open the gates.

In 1998, both dams had the sluice gates replaced using the state procurement process for construction projects. The design engineers chose square sluice gates manufactured by Rodney Hunt and operated by a conventional hand wheel similar to the original gates. The capital-outlay procurement process used for construction projects allows for award based only on lowest price, without regard to the low-bid contractor’s qualifications or experience. The contractor who was awarded both valve replacement projects was experienced in water and wastewater pipeline construction, not in dam construction and repair. The firm did not follow the procedures required by OSHA for confined space entry, and had men working in an unventilated, confined space with less than 16% oxygen and no protective breathing apparatus. When the crew discovered that they couldn’t fit the precision-machined gate frames up the outfall sluice, they cut them in half. Once installed, they hid the damage by covering it with black epoxy. The contractor completed the gate replacement at Hungry Mother State Park, but defaulted and abandoned the project at Douthat State Park, and it was completed by another contractor. The gates began to malfunction almost immediately after installation. They were difficult to operate, and commonly jammed in the open position, requiring emergency response from divers to stop the lake from draining on multiple occasions.

In early 2006, the decision was made to replace the gates again, after less than 10 years. Virgina-based Watershed Services worked with Commonwealth of Virginia District Dam Engineer Kenneth E. Turner, PE, in development of the design. For longevity and reliability, stainless steel Orbinox knife valves were recommended. A precision machined fabrication was used to adapt from the square sluice gates to the round knife valves. To eliminate the need to operate the gates from the structure, hydraulic actuation was chosen. Redundant, switchable actuators were requested by the client to provide absolute assurance of reliability.

The hydraulic actuation system is composed of a hydraulic cylinder mounted to the top of each valve, with hydraulic lines run to the location of the controls cabinet. The stainless steel, weatherproof controls cabinet contains a gel battery, a hydraulic pump, a voltage regulator, and optionally may contain a programmable logic controller that can process numerous inputs and autonomously operate the valves according to a simple water level indicator, or a complex series of parameters determined by the client and engineer. The battery is recharged by solar panels, giving complete infrastructure independence. The hydraulic oil is vegetable based, and safe for sensitive environments such as drinking water reservoirs. For this project, a controls cabinet was placed near the outfall sluice so the flow could be observed and adjusted so as not to damage or overwhelm the stream channel.

Watershed Services recommended the addition of a metal fabrication and trash rack to change the direction of the water intake ninety degrees, from the side of the structure to looking toward the top. This will help to prevent sediment and debris from interfering with the valves. Unlike the sluice gates, the knife valves are strong enough to shear any debris that could pass through the trash rack.

The project was put out to bid again, but this time a different process was used which allowed the state to require specific dam repair experience and proper insurance for dam work. Watershed Services submitted a bid on the work and named the successful bidder.

Watershed Services’ project manager, Cameron J. Smith, visited both sites in March 2006 with divers and an inspection team to collect all measurements necessary to initiate fabrication of the machined components.

The first valves to be replaced were at Douthat State Park near Clifton Forge, Virginia. The work was begun by commercial divers lowering a bulkhead on the pressure side of the structure, and placing some temporary water-stopping materials to provide the driest possible work environment in the tower. The tower was properly ventilated to allow the crew to work without self-contained breathing apparatus. The old gates were dismantled and removed. The coating on the old gates was supposed to be proper for underwater use, but it was already coming off. The gate stems that were supposed to be stainless steel were found to be mild steel, and were substantially deteriorated. They were cut into manageable lengths and removed. The old operators were removed, but the stem guides were left in place to serve as anchor points for the new hydraulic lines. Once demolition was complete, some concrete repair was done to provide a proper surface for the new installation. A gantry crane was constructed and mounted on top of the tower. This was used to pick the new fabrications and gate assemblies off a boat and lower them into the tower. The machined fabrications that allowed the change from square sluice gates to round valves was lowered and placed. The valve frames were then lowered into place and mounted, followed by the valves themselves. The hydraulic cylinders were mounted onto the valves, and hoses run to the controls cabinets. The cabinets were placed and mounted. Although the cabinets are locking, at the client’s request, keyed switches were also provided to guard against tampering. Vegetable-based hydraulic oil was added and air purged from the system. The work, begun in early April 2006, was completed in mid May. State park personnel, who had closely monitored the project, were trained in the operation of the valves. ‘We look forward to the reliability and ease of use the new valves provide,’ says Forrest Gladden, manager of District VI, which includes Douthat State Park. ‘This valve replacement project solves a difficult problem that park personnel have dealt with repeatedly for several years.’

The valve replacement at Hungry Mother State Park began immediately following Douthat’s completion in May. Divers had an extra consideration at this location because the park’s elevation of just over 610m reduces the amount of time they can spend underwater. In addition to lowering the bulkhead on the pressure side, plastic sheeting was used on the inside of the structure to block the high-pressure streams of icy water shooting through the porous areas of the concrete, making conditions slightly more pleasant for the work crews. The work was staged and completed in a very similar manner. Park personnel at Hungry Mother State Park, who had also closely monitored the project, were trained with a discussion and review of the system, followed by on-site operation of the valves. ‘We are excited to have this long term problem solved for us with such an easy-to-operate alternative,’ says Park Manager Jim Kelly.

Selecting a contractor based solely on price may be appropriate for non-technical construction projects where little to no danger is involved, but it is not an appropriate method for work involving modification to high hazard dams without lowering the pool. The low-bid contracting method exposed the state to risk if the contractor’s personnel had suffered an injury from not taking proper precautions for the hazards presented in dam repair, and to greater risk if the contractor had had some mishap that caused an uncontrolled release of pool. Using the low-bid contractor also resulted in improper installation of the components, causing replacement in only a fraction of what the useful life should have been. In highly technical work such as dam repair against standing head pressures, properly screening and qualifying bidding contractors is a safer, more practical, and more economical solution.